A man exploded on Odessa beach as he entered the water 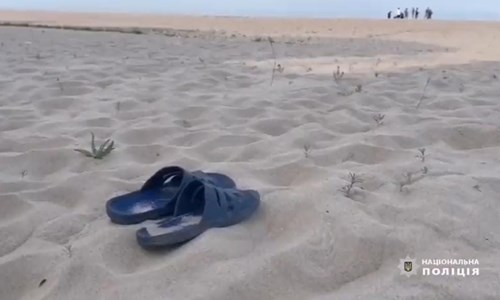 Despite warnings not to swim in front of the beach full of mines scattered by the Ukrainians, a man who swam on the beach in Odessa, killed after encountering a naval mine scattered by the Ukrainians to prevent Russian ships from approaching | Following the incident, the warning was sharpened: “Do not go to the coastal area of ​​the Black Sea, do not swim in a sea full of mines”

A man swimming on the beach in Odessa, Ukraine exploded to death in front of his family after stepping on a naval mine left by Ukrainian forces to prevent Russian ships from approaching the shore.

Documentation released by Odessa police shows the sudden explosion meters from the shore, scattering the body parts of the 50-year-old across the beach while his wife, son and friend are watching. Although it is not yet clear what caused the explosion, swimming in the area is prohibited because of mines planted during the ongoing Russian war.

The video shows people running on the beach towards the water when the explosion takes place, but stopping and retracing their steps. The man whose name was not released did not obey instructions not to enter the water, and went in to swim and died as a result. The victim’s friend was swimming with him at the time, but was not injured in the blast.

Following the tragic incident, Odessa Oblast Police have sharpened their warning: “Police are urging Odessa residents and guests to strictly abide by the rules of military law, do not go to the Black Sea coast, do not swim in a sea full of mines.”

Meanwhile, former Russian President Dmitry Medvedev has warned that Moscow will attack cities in the West if Ukraine uses US-supplied missiles. Medvedev currently serves as Russia’s deputy head of the National Security Council, and was president from 2008 to 2012. He wrote last week : “I’m often asked why my telegram posts are so difficult. The answer is that I hate them. They are degenerating, they want death for Russia. “And while I’m alive, I’m going to do anything to make them go away.”