A mural for Paolo Borsellino near the Ucciardone bunker classroom 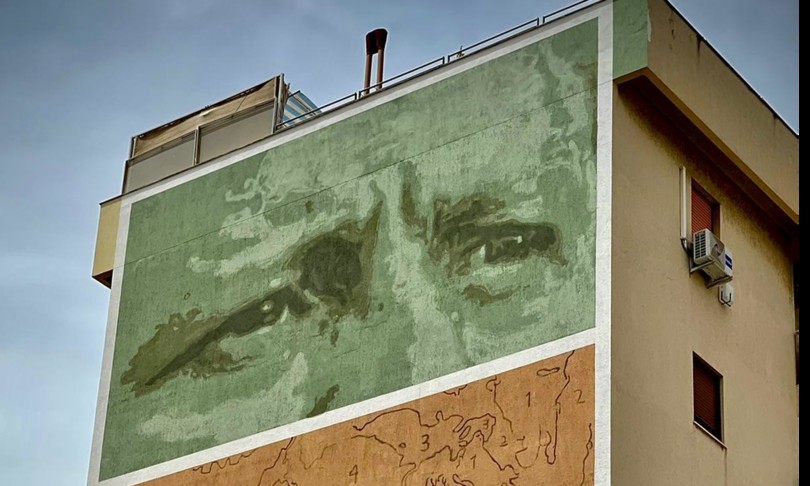 Time.news – A gigantic mural for Paolo Borsellino and his escort. The last great piece of the Porta di Giganti, a work of the Giovanni Falcone Foundation, created by the artist Andrea Buglisi with the contribution of the Lazio Region. It is the final chapter of the narrative Spazi Capaci-Comunità Capaci, which, through art, aims to renew the relationship between cities and citizens.

It is a social design project curated by Alessandro de Lisi. The mural that reproduces the face of the judge killed in via D’Amelio on 19 July 1992, together with the escort agents Eddie Walter Cosina, Emanuela Loi, Claudio Traina, Agostino Catalano and Vincenzo Li Muli.

It was made on an area of ​​over nine hundred square meters, on a six-storey building in via Sampolo, near the bunker hall of the court of Palermo, theater of the Maxi trial against the mafia, next to the large portrait of Giovanni Falcone, completed on May 23rd. “With this portrait the Foundation intends to express all its gratitude towards a brave man, a man who knew his dramatic destiny and did not escape it”, says Maria Falcone.

A figure “who in some way recalls the protagonists of certain Greek tragedies, ready to sacrifice despite being aware of the fate to which they were condemned. Paolo Borsellino, like my brother Giovanni, he did not feel like a hero, he was simply a man of the state. He believed in institutions, he believed in justice and did his duty to the full “, adds the sister of the murdered magistrate and president of the Falcone Foundation.

“This is a tribute to Paolo Borsellino’s family and to the city of Palermo, a work that will involve other parts of the urban fabric in a project that will see works in other large centers hit by the Cosa Nostra attacks thirty years ago, to celebrate life, that special ability of the resistant communities to flourish in a secluded way, also through contemporary art “, explains Alessandro de Lisi.

“Spazi Capaci”, completed on May 18, on the day Judge Falcone would have turned 82, wants to bring cities back to life through the works in an experimental path of “Memory 4.0”, which, starting from places in Palermo, symbol of the vitality of the civil struggle against the mafia, travels across the country.

A three-year journey towards the re-appropriation of significant places of memory, with the goal in 2023, the year in which the 30th anniversary of the massacres in Florence, Rome and Milan occurs and the culmination of Cosa Nostra’s massacre strategy.

The project was inaugurated on May 23, the day of the Capaci massacre, in the Bunker Hall of the Ucciardone which hosted a colossal installation by Velasco Vitali entitled “Branco”, 54 life-size dogs, sculptures inspired by Picasso’s magical realism, in iron, sheet metal and concrete. The pack represents the hunger for criminal power and the abuse of the mafia on society but also the reaction, the civil struggle, the transformation into sentinels guarding the truth.

In the project, to which the Superintendence for Cultural Heritage of Palermo joined, il Teatro Massimo in Palermo, the Salinas Regional Archaeological Museum, the Colosseum in Rome, in addition to the Branco and “The door of the Giants”, there is also the statue “The wait” created by the Trentino artist Peter Demetz: a young woman who represents the expectation of a city for justice and, dreamily, the return to home of Giovanni Falcone and his wife Francesca Morvillo.

The work was placed in front of the Falcone Tree, the emblem of a community that was able to awaken from the sleep of submission to Cosa Nostra, starting a new season of civil liability. Finally, again for Spazi Capaci in Brancaccio, a suburb for years fief of the clans, art has taken up again in Piazza Anita Garibaldi.

Where the house museum dedicated to Don Pino Puglisi stands, Igor Scalisi Palminteri has created a monumental urban polyptych entitled “Roveto Ardente”, portraying the priest killed by the mafia, the match that went out and set the eternal fire of the flame of courage. Culture and beauty where Don Pino, proclaimed blessed, fought his battle for the boys to regain their freedom from the mafia. Turkey-Syria Earthquake | Death passed 5100; A three-month state of emergency has been declared in ten provinces of Turkey
Posted onFebruary 7, 2023February 7, 2023

“We will defend the great advance of ‘only yes is yes’ and we will correct the problem of reduced sentences”
Posted onFebruary 7, 2023February 7, 2023
Menu