a new book dives into the papacy of Pius XII 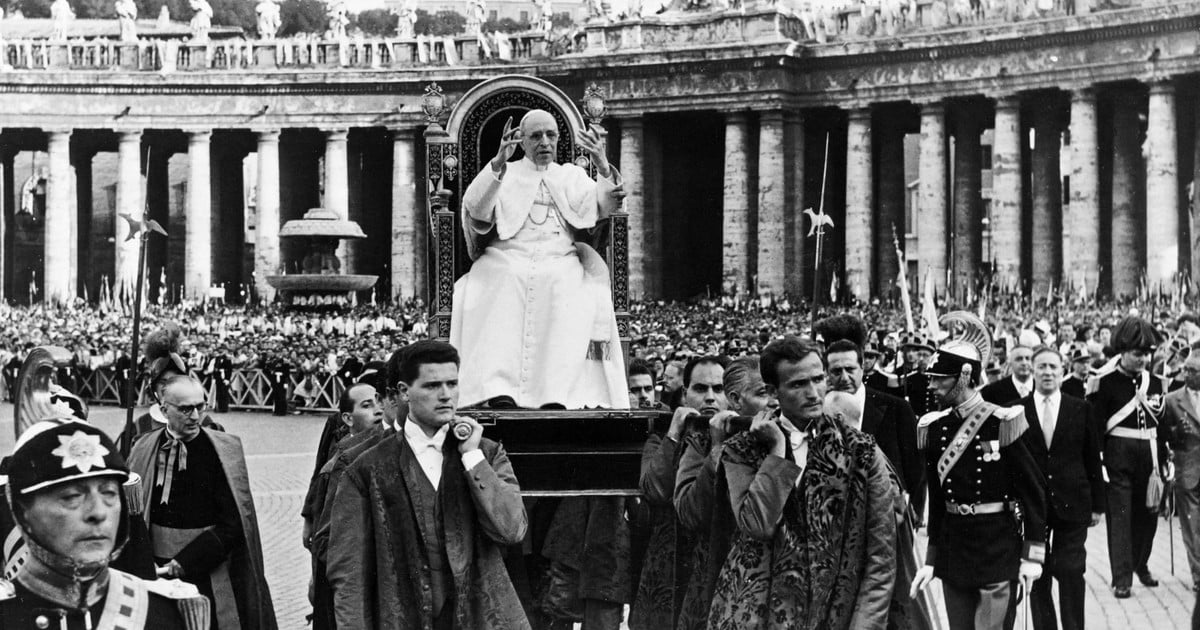 The Vatican has long defended its World War II-era pope Pius XII against criticism that he remained silent as the Holocaust unfolded, insisting he worked quietly behind the scenes to save lives.

A new book, citing recently opened Vatican archives, suggests that the lives the Vatican worked hardest to save were those of Jews who had converted to Catholicism or were the children of Catholic-Jewish “mixed marriages.”

The documents that testify to the frantic search for baptismal certificates, the lists of names of converts given by the Vatican to the German ambassador and the heartfelt pleas of Catholics for the Pope to find their relatives of Jewish descent are contained in the book by David Kertzer The Pope at War (The Pope at war), which is published this Tuesday in the United States.

Kertzer’s Pulitzer Prize-winning book follows in the footsteps of the Pope and Mussolini. It uses the millions of recently released documents in the Vatican archives, as well as in the state archives of Italy, France, Germany, the United States, and Great Britain, to craft a history of World War II through the prism of the papacy of Pius XII. and its extensive diplomatic network with the Axis and Allied nations.

“The amount of material in these files on the search for records of jewish baptism that could save them is really impressive,” Kertzer said in a telephone interview before publication.

The American researcher David Kertzer and his book on the Vatican and Mussolini, Pope Pius XII, in 2015. Photo: AP

A timid and frightened Pope

The 484-page book, and nearly 100 pages of endnotes, portrays a timid pontiff who was not driven by antisemitismbut rather because of the conviction that the neutrality of the Vatican was the best and only way to protect the interests of the Catholic Church while the war was raging.

Kertzer, a professor of anthropology and Italian studies at Brown University, suggests that Pius’ main motivation was fear: fear for the Church and Catholics in German-occupied territories if, as he believed to the end, the Axis won. ; Y fear that atheist communism would spread by Christian Europe if the Axis lost.

To allay that fear, Kertzer writes, Pius charted an extremely cautious course in order to avoid conflict with the Nazis at all costs. He gave direct orders to the Vatican newspaper The Osservatore Romano not to write about German atrocities, and to ensure seamless cooperation with the fascist dictatorship of Benito Mussolini in the backyard of the Vatican.

That meant never saying a word in public to explicitly denounce SS massacres, even when Jews were rounded up just outside the Vatican walls, as they were on October 16, 1943, and put on trains bound for Auschwitz.

Kertzer concludes that Pius was not “Hitler’s Pope,” the provocative title of the latest blockbuster of the Pius era, written by John Cornwell. But neither was he the champion of the Jews that Pius’s supporters maintain.

Marla Stone, a professor of humanities at the American Academy in Rome, said the book “takes a position between the earlier poles of historical interpretation.”

“Previously, the options were that Pius XII was ‘Hitler’s Pope,’ deeply sympathetic to the Nazis, eager for a Nazi-fascist victory, obsessed with defeating the Soviets at all costs, and a dedicated anti-Semite,” he told a panel. at the academy last month.

“The other historiographical position held that Pius XII did everything in his power to help those suffering under Nazi and fascist oppression and that he was simply limited by circumstances,” he recalled.

The Pope at War it is one of several books beginning to come to light two years after Pope Francis opened the Pius XII archives ahead of schedule.

This allowed scholars to access all the documentation to resolve outstanding questions about Pius and what he did or did not do as the Holocaust unfolded.

One of the first to come to light was written internally, by the archivist of the Vatican Secretariat of State, Johan Ickx. Perhaps understandably, he praised Pius and the Vatican’s humanitarian efforts to care for Jews and people fleeing war, recounting the hundreds of dossiers of Jews who came to him, begging for help.

“For the Jews it was obvious and clear that Pius XII was on their side and he and his staff would have done everything possible to save them,” Ickx told Vatican News.

The Rev. Peter Gumpel, a German researcher who promoted Pius’s now-stalled sainthood cause, argued that the pope could not speak more publicly because he knew it would anger Adolf Hitler and lead to the deaths of more Jews.

He cites the case of a Catholic bishop in the Netherlands who spoke out against the deportation of Jews and the response of the Gestapo: it was to deport Jews who had converted to Catholicism.

Silence in the face of Nazi atrocities

The Vatican had already taken the extraordinary step, between 1965 and 1981, of publishing a documentation in 11 volumes, entrusted to a team of Jesuits, to try to refute the criticisms of Pius’s silence that arose after the play “The Deputy” , from 1963, which alleged that he had made turning a blind eye to Nazi atrocities.

Pius XII, in a poster on the role of the Church in World War II, in the Holocaust Museum in Jerusalem, in 2007. Photo: AP

But even the prefect of the Vatican archives, Monsignor Sergio Pagano, recently said that the initiative, although “worthy” at the time, now needs to be reviewed.

During a round table organized by a Spanish research institute in Rome, Pagano acknowledged that the Jesuits “sometimes looked at half a document, and the other half did not”, and that he had become aware of some “strange omissions” that are now they are making evident.

But he insisted there was no attempt to hide uncomfortable truths, just the lack of full access to all files and the chaos of working quickly with a disorganized file.

Kertzer identifies two major omissions in his book: the first is the transcriptions of a series of secret meetings between Pius and a personal envoy of Hitler, Prince Philipp von Hessen, which began shortly after Pius was elected and continued for two years.

The secret channel gave Pio a direct line to hitler that until then was unknown, even to the high Vatican officials of the time.

The second was the full content of the note from Pius’s top diplomatic adviser on Jewish questions, Monsignor Angelo Dell’Acqua, in response to pleas for Pius to finally say something about the roundup of Jews from Italy that accelerated in the fall and winter of 1943.

Although Dell’Acqua’s view—that Pius should say nothing—was previously known, Kertzer says that the anti-Semitic slurs he used to describe Jews had been excised from the Jesuits’ 11-volume text.

The Osservatore Romano has already confronted Kertzer’s scholarship, criticizing a 2020 essay he published in The Atlantic about some preliminary findings from the files as “strong but unproven claims.”

A key example of Vatican priorities, says Kertzer, came during the roundup of Jews from Rome on October 16, 1943. That cold morning, 1,259 Jews were arrested and taken to a military barracks near the Vatican, destined for deportation to Auschwitz.

The day after his capture, the Vatican Secretariat of State received permission from the German authorities to send an envoy to the barracks, who verified that among those inside “there were people who had already been baptized, confirmed and had married for the church,” according to the envoy’s notes.

In the days that followed, the Secretary of State drew up lists of people the Church considered Catholic and handed the names over to the German ambassador requesting his intervention. In all, of the 1,259 people initially detained, some 250 escaped deportation.

“To me, what this means, and I think it’s also new in the book, is that the Vatican participates in the selection of the Jews,” Kertzer said in the interview. And he concluded: “Who is going to live and who is going to die.”