a tour of the world of literature – time.news 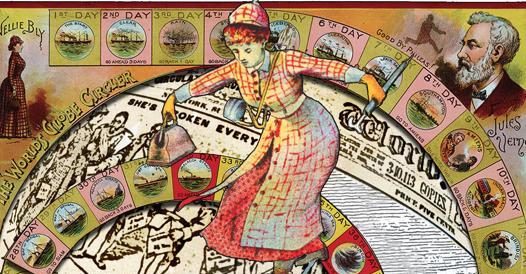 The curse of the blank page, the writer’s creative block: a nightmare that has affected even the greatest authors of the past. Literary giants who then overcame the obstacle with unexpected and mysterious help. The story of this magic leaks from the pages of The secret book of Jules Verne (Solferino), original excursus among the myths of children’s literature, written by Luca Crovi and Peppo Bianchessi, also the author of the most refined illustrations.

In an original relay, which involves a very young Edgar Allan Poe, the story goes around the world twice, goes through all kinds of adventures to land in the Samoa Islands and meet Robert Louis Stevenson. A secret is discovered hidden in a bottle thrown into the ocean. And also the existence of an ancient book, with incredible powers: a bizarre volume that seems to have blank pages, but when the ink finally appears it becomes a hotbed of fantastic stories that manage to infiltrate the minds of the authors in search of inspiration. Depending on the mood of the reader, the stories change and can be wonderful or terrible, funny or scary adventures. They can make you laugh or cry. It depends on the state of mind of those who hold it in their hand. This is why the book can be a gift or a curse.

It sounds like a fairy tale, but not quite so. In fact, Crovi and Bianchessi succeed in a very ambitious project: capture the young reader’s attention in an intricate puzzle, also based on irrefutable historical truths. We discover an author and become curious about the deeds of another connected to him, then it happens again, we proceed from novel to novel. Thus a panorama of fantastic adventures unfolds which becomes the best advertisement to encourage children to read.

For example, Edgar Allan Poe, protagonist of the first chapters, tells himself in his true college experience (corresponding to the years of high school) which will become the subject of inspiration for the story William Wilson, published by the author in 1839.

We are in 1816, the Allan family who adopted it moved from the State of Virginia, in the USA, in London. The young Edgar goes to study in a school (probably in the suburb of Stoke Newington just outside the city) which is located in a mansion with a gloomy appearance, made even more spooky by the cemetery next to it. To give some extra thrills, the math teacher leads the students to take lessons among the tombs, a trick to learn how to count using the dates of birth and death written on the tombstones. A very gothic touch also comes from the so-called school kit: each student is equipped with a shovel, to help dig the pit, in the event of the premature death of some schoolmate.

in this context that the magic book makes its first appearance and then, amidst unexpected events, metamorphosis and twists, we find it in the hands of Jules Verne who manages to take possession of it in a daring way. And even here the authors who make the plot proceed among clues, proofs and deductions, amuse themselves by surprising with a dip in historical truth.

France, 1939: at the age of eleven, the future author of Around the world in eighty days lives with the family in the river area of ​​the Loire, where ships that will then sail the Atlantic also call. The boy madly in love with his cousin Caroline Tronson, who does not deserve a glance, so to conquer her he embarks, in the locality of Paimbœuf, as a boy on a three-masted boat, a boat called Coralie en route to the Indies.

In the coral reefs of the Caribbean Sea the naive Jules plans to remedy, in some way, a necklace to give to your beloved. The love plan falls apart because his father, worried about his escape, finds him and brings him home before he sails. The dream of love will not be fulfilled but in the short stay on the ship Jules Verne discovers, by chance, the magic volume. Very useful tool in the subsequent career as a writer. I learned to use it with serenity. I got used to its flows and used it as if it were a well of wonders capable of recharging my imagination. I used it to build mine Extraordinary journeys.

By modestly sharing his experience with other authors, Jules Verne is selfless and wants to share the magic of the inspiring book with Nellie Bly, pseudonym of Elizabeth Jane Cochran, an American pioneer of investigative journalism, who works for the Pulitzer publisher and comes to challenge Verne on her own ground.

In fact, when 1888 and the woman, an outrageous character for the times, meet she is leaving alone for a tour around the world. A bet to be made in just seventy-two days instead of eighty. The brave but somewhat careless journalist, with her distraction, makes the magic book do another somersault that will enchant a new great writer.

Luca Crovi (Milan, 1968) editor at Sergio Bonelli Editore and writer. He has written comic stories from texts by Massimo Carlotto, Carlo Lucarelli, Andrea G. Pinketts and Joe R. Lansdale. Peppo Bianchessi (Crema, 1967) author and illustrator of books for children and teenagers, has published in Japan and Italy and as an illustrator he has collaborated with Roberto Piumini, Anna Vivarelli, Ekuni Kaori

They were inspired by the most famous writers of children’s literature Luca Crovi and Peppo Bianchessi in theirs The secret book of Jules Verne(to be released on Thursday 11 March from Solferino). Starting with the author who gives the volume its title, Verne (1828-1905), who discovered his passion for adventure as a child, when at the age of 11 he tried to embark on a merchant ship. The French author writes hundreds of adventure novels and travel stories, including the masterpieces: Journey to the Center of the Earth (1864); Twenty thousand leagues under the sea (1870); Around the world in eighty days (1873). Among the protagonists of the book also a young Edgar Allan Poe (1809-1849), an American author with a gothic style and initiator of psychological mystery and horror literature (as well as writing about science fiction and adventure). Among his titles: The murders of the Rue Morgue (1841), Arthur Gordon Pym story (1838); The black Cat(1843). In the volume of Crovi e Bianchessi there is also Nellie Bly (1864-1922), pseudonym of Elizabeth Jane Cochran, an American pioneer of investigative journalism. Also the Scottish Robert Louis Stevenson, father of Treasure Island(1883) and Edmondo De Amicis (his Heart of 1886). Character of the book also Carlo Lorenzini, that is the Carlo Collodi who gave birth to the timeless Pinocchio (1881-83). (j. ch.)

“Shiffrin, I would put her in the wind with my fingers in my nose”: Goitschel lets go before the World Ski Championships
Posted onFebruary 4, 2023February 4, 2023