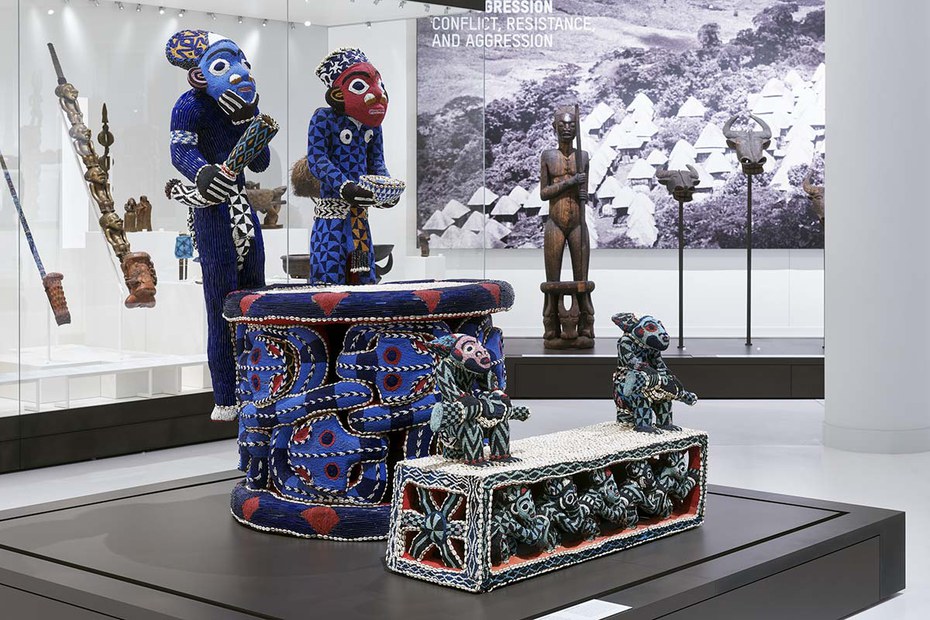 This year, the Rautenstrauch-Joest Museum Cologne, the MARKK Hamburg and the Linden-Museum Stuttgart opened exhibitions that address the colonial entanglement of their own house and thus contribute to positioning ethnological museums in the debate about colonial appropriation. The situation is different in Berlin’s Humboldt Forum, which opened part of the new exhibition at the Ethnological Museum at the end of September.

In the presentation of the material culture of Cameroon, the Cameroonian perspectives remain invisible, while the violent acts of the German colonial officers are hardly mentioned. The connecting element of the exhibition is obvious. Karl Adametz, Hans Glauning, Kurt von Pavel, Hans Caspar Gans zu Putlitz – to name just a few of the actors who are still presented here as “collectors” of a large part of the exhibits – were all representatives of the colonial state who acted as officers of the ” Schutztruppe “waged cruel wars against resistant local societies. From a European point of view, these campaigns were often labeled “punitive expeditions” in order to give the appearance of legality to the violence against the local communities. In their official reports, these officers therefore mostly did not mention that they were looting palaces and villages. However, if they continue to be labeled uncritically as “collectors”, this contributes to the fact that colonial thought patterns, such as the ideas of “rescue ethnology” or the “discovery” of unknown cultures, are constantly being updated. The fact that these and other problematic terms are only put in quotation marks and that visitors to the exhibition are not offered an explicitly critical examination of the terminology is just one of the many intolerable characteristics of the Africa exhibition in the Humboldt Forum.

A table, for example, ventures forward and claims that Hans Glauning might have “collected” a serving vessel “during or after the conquest of Banso”. Steep thesis! 200 soldiers and 2 machine guns come to your home uninvited, kill 700 to 800 neighbors, pillage and plunder … Such an understanding of “collecting” is irritating! Glauning is celebrated in the exhibition as an “enthusiastic amateur ethnologist” not least because, as head of the company, he fortunately managed to “acquire” the most beautifully decorated service in the region despite all the devastation. Thanks to this outstanding “balance sheet of the historical circumstances”, the Humboldt-Forum Berlin now has the material estate of a mass murderer, in almost all cases it can be proven that it was illegally acquired. Because Glauning was actually much better known for having bloodily suppressed local resistance movements in German East Africa such as Cameroon. Something similar is known from all the other officers quoted at the beginning, but hardly noticeable in the collection.

The fact that Hans Caspar Gans zu Putlitz was involved in a campaign against the Kom, which meant that two imposing throne figures from this war can now stand in the center of the exhibition room, can only be seen in hidden marginal notes. The far too small photo of the booty from the military expedition against the Kom is barely recognizable and placed far too low. Finally, the presence of these spoils of war is justified by a quote from the art historian Mathias Alubafi selected by the curators, which raises questions about the use of Cameroonian voices to legitimize the exhibition.

A Eurocentric historiography is reproduced on the information boards, which now and then strongly approximates colonial-revisionist rhetoric, such as that of the AfD. At one point, contemporary German colonialism is at least “often shaped by racism.”[e] and enforced by force[e]”The form of foreign rule described. What is evoked in the descriptions, however, is rather a casual feeling of innocence on the part of Germany. The diversity of Cameroonian cultural and language groups and their relationships with one another seem to the curators to be too complex and intangible. It is easier to understand that “Africans and Germans each pursued their own strategies to defend or expand influence.” After all, it is mentioned that many of the former lost their independence and their lives in the course of this. The perpetrator is rarely discussed, however, and the explanations are often lost in passive constructions, thus contributing to a romanticized and transfigured view of the colonial past, where it would actually be necessary to talk about crimes against humanity.

In the exhibition rooms, there is also no question of how these objects are seen by Cameroonians. However, according to the explanatory text, the objects formed “an important basis for scientific work by researchers and members of the societies of origin from all over the world”. But there is no room for that in the exhibition either. With all the difficulties that researchers from Africa have with proof of visas, creditworthiness and, in the meantime, vaccination cards, it is cynical to speak of the objects being “made accessible” in the foam magazine. Ethical questions such as the respectful handling of sacred or symbolic artefacts are also left out. Rather, the show magazine is based on the typological representations of material culture in the traditional models of evolutionary stages of development. It shows neither “how different collectors acquired objects” nor “how the works were reinterpreted”, because that would require the voices of those who know the stories of these objects.

Votes that, as in the case of Return claims concerned NgonnsoFigure would be available. It is precisely this embodied creator of the Nso that illustrates the broad spectrum of possible thematic disputes, including the object as the subject of current political power relations. In view of the current state of the debate about looted art in German museums, the curators have an obligation to position themselves. The objects have the potential to serve as a fixed point that initiates a serious dialogue about how to deal with the presence of colonial cultural heritage in Germany and the absence of this cultural heritage in Cameroon.

Ultimately, the exhibition also fails in its attempt to give anti-colonial actors an appropriate place. Rudolf Duala Manga Bell is described as a sophisticated cosmopolitan who “made several trips to Europe”, although at the time he did not enjoy financial freedom and had to live with a host family. If you want to learn more sustainable things about the causes of his political engagement against German colonial rule and about the history of colonial Cameroon and also prefer a contemporary curatorial implementation, we recommend that you book a ticket to Hamburg for the exhibition Hey Hamburg, do you know Duala Manga Bell? im MARKK.