Agreement between Eni and Politecnico di Milano for ‘carbon neutrality’ 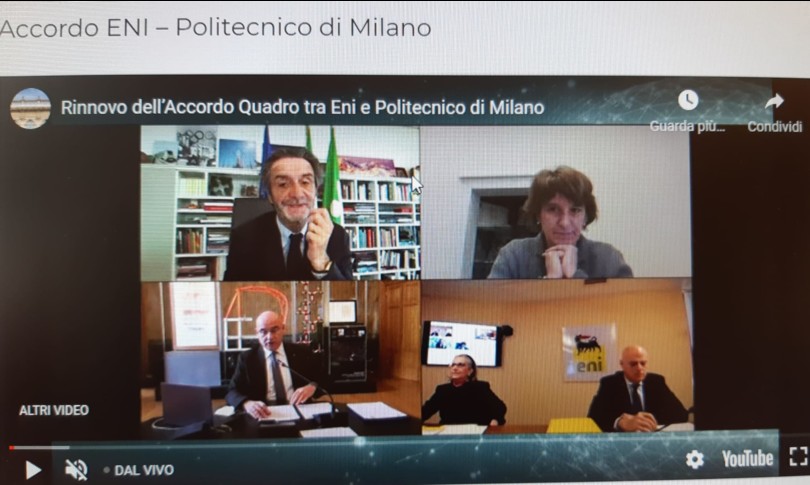 Time.news – Eni and Politecnico di Milano signed a new framework agreement during an online event attended by the Minister of University and Research Maria Cristina Messa, the president of the Lombardy Region Attilio Fontana, the rector of the Polytechnic Ferruccio Resta , the president of Eni, Lucia Calvosa and the CEO of Eni, Claudio Descalzi

Started in 2008, the collaboration between Eni and Politecnico di Milano has been able to count on investments in research activities for approximately 50 million euros, leading to innovative solutions in various fields, including Circular Economy, Carbon Neutrality and the monitoring systems used in Asset Integrity Management. The new framework agreement aims to consolidate the important partnership between Eni and Politecnico di Milano and make it even more functional to the strategic lines of sustainable development, by identifying and disseminating new technologies.

The strategic element of this new framework agreement, lasting 5 years, extendable to 7, is the creation of the first Joint Center for accelerating the application of innovative technologies for the energy transition and Carbon Neutrality. Specific projects will be carried out in this Joint Center, identified through Technology Foresight and analysis initiatives dedicated to accelerating the development paths of technologies and their deployment. These projects will work closely together, in an environment that facilitates the creation of new ideas and their rapid transfer to the market, researchers, technologists and experts in accelerating the time-to-market of research products from both sides.

The Joint Center is part of the Innovation District project that the Politecnico di Milano is developing in its Milanese hub in Bovisa, for which it has already received important funding from the Lombardy Region in 2019.

The rector: “An innovation point has been created north of Milan”

“The agreement signed today between Politecnico di Milano and Eni – commented Ferruccio Resta – is part of a development framework that aims to create a real innovation district north of Milan. The Center is an integral part of an ambitious project: the Parco dei Gasometri, which already sees a significant commitment by the Lombardy Region. Institutions and companies therefore committed to research and innovation, that of the energy transition and new technologies for the environment, which is central to the country’s recovery, as indicated by the Next Generation Eu Plan ”.

“With today’s agreement – stressed Attilio Fontana – the Lombardy Region confirms the broad support provided to universities and above all to the new model of conceiving university education, in close connection with the needs of the company and with the support of the institutions. A project that for the Region is not unique, but an experience that wants to be replicable, while respecting the particularity of each territory and above all of each university. We conceive this agreement as part of our vision of Lombardy, linked to sustainable development, which intertwines the environmental, social and economic dimensions ”.

Mass: “Investments to bring us closer to the European media”

“We need to invest in research, trying to increase the 1.4% of GDP we have today in Italy and get closer to the European average which is 2.1%. This also means an increase in human capital, we need to work a lot on the skills that are human capital. Researchers, both in the public and in the private system, must have both a quantitative and qualitative increase in recognition “, remarked the Minister of University and Research, Cristina Messa.

Calvosa: “Eni is reaching out to decarbonization”

The agreement between Eni and Politecnico di Milano “seals a multi-year partnership. I am pleased for the historical context in which, also due to the health emergency, attention to the environment and sustainability issues are accentuated, which represent macro themes of collaboration between society and the university “, said the president of Eni, Lucia. Calvosa.
“Eni – he pointed out – has been reaching out for some time, and ultimately even more, in its decarbonization process in line with European climate objectives, with the use of ever-increasing resources to develop technologies that are as free from emissions as possible. In our business model, research, innovation and digitization are key themes that we are increasingly enhancing also in a logic of recovery of the country and industrial development “. The Eni president greeted the agreement “with great satisfaction and pride” saying she was “certain of the fruits that the collaboration will bring to Eni, the Polytechnic and the country”.

“To imagine a positive future for the environment, employment, health and education, it is essential to focus on research and innovation, just as it is essential to have a transmission chain between universities and industry. These are things we strongly believe in. “, highlighted Eni’s CEO, Claudio Descalzi.

“We wanted to renew the agreement, we have developed technologies and we want to have further patents on topics such as the circular economy that sees us in chemistry and refining with proprietary patents, therefore 100% Eni and Italian technologies that have allowed us to transform refineries. We were the first in the world to transform traditional refineries and this thanks to innovation and technologies, no longer needing to use either oil or gas “, explained the CEO.

Eni’s CEO underlined the importance of research and its practical application: “We want to characterize ourselves more and more as actors who do research to implement it immediately. We have had a time to market in scientific research, from discovery to grounding, of three and a half years, in the face of much longer average times, on research we can even speak of a decade, we are trying to accelerate even more “.

“We have produced – stated Eni’s CEO – 7,500 patents, with an application on 450 projects which is a gigantic amount”. The Center built with the Politecnico di Milano “will be used precisely to ground these projects, to monitor, to create new professional figures. For us it is also essential because we have made an important commitment in the latest strategy presentation or to arrive at a carbon neutrality by 2050 and reaching complete carbon neutrality in Europe at the beginning of 2040. All this development to reach a completely clean energy is based only on existing technologies. This important union with Polimi accompanies a diversified presence of Eni with about 70 universities and centers of research worldwide, with 50% of Italian universities and centers. We have 7 research centers in Italy on different disciplines, it is an effort that sees us working intensely “.

“We have renewed a strategically important agreement that gives us great strength to accelerate the transition to increasingly sustainable energy. Ours is an ambitious and concrete path, for which we have already taken important steps, but we cannot complete it only with our commitment: it is necessary to create a system at the country level, to promote the culture of circularity and Carbon Neutrality and to make common opportunity for investment and know-how “, he concluded.