Angela Merkel is officially leaving the post of German Chancellor, which she held for 16 years. And, despite the fact that until parliament elects a successor to her, she will remain in the post of head of the cabinet in the status of an interim at the helm of the German government.

A grand ceremony by torchlight

This traditional military ceremonial act called “Der Große Zapfenstreich”, performed in Germany to honor retiring senior government officials and generals of the army, is considered the highest tribute the Federal Republic’s armed forces can pay to a civilian.

The ceremony, always held in the evening by torchlight, is precisely scheduled and worked out to the smallest detail. It is led by an officer of the Bundeswehr, at least in the rank of staff officer. The head of the musical corps is responsible for the musical performance. The most spectacular part of this grandiose musical performance is the march of military units in full ceremonial uniforms, with torches.

According to tradition, the hero of the occasion can first choose several pieces of music that he would like to hear performed by the Bundeswehr Orchestra. The musical preferences of Angela Merkel, who is actually known for her passion for classical music, came as a surprise to many.

As it became known, at the request of the outgoing federal chancellor, military musicians rehearsed the Christian hymn “Großer Gott, wir loben Dich” (“Great God, we praise you”), the words to which were written by the German Catholic priest and theologian of the 18th century Ignaz Franz (Ignaz Franz), and in addition to it – the composition “Für mich soll’s rote Rosen” (“It will rain for me from red roses”) by the legendary German actress and singer Hildegard Knef and the 1970s hit “Du hast den Farbfilm vergessen “(” You Forgot the Color Film “), once glorified by the” mother of German punk rock “Nina Hagen. Here is such an unexpected musical cocktail.

Just like Hildegard Knef and Nina Hagen, Angela Merkel is originally from the GDR. She was born in Templin, a city in the federal state of Brandenburg. Like many other members of her generation who grew up in the GDR, Merkel loved listening to songs by Nina Hagen. Well, and the text of the song “You Forgot Your Color Film”, which was first performed in 1974, which she chose for performance at the farewell ceremony, and today almost every second inhabitant of East Germany knows by heart.

Especially in it stands out the following line: “Nun glaubt uns kein Mensch, wie schön’s hier war, ha ha” (“Now no one will believe us how good it was here, ha ha”). Does it mean that Merkel yearns for the GDR? Unlikely. Rather, by choosing this song, the politician simply decided to demonstrate her sense of humor – which, by the way, she does not hold.

Incidentally, about thirty years ago, Angela Merkel, then the Federal Minister for Women and Youth Affairs, personally met with Nina Hagen on a television talk show. When it came to drug addiction, Hagen suddenly threw down to Merkel: “I’m fed up with your lies, your hypocrisy.” But judging by the fact that Angela Merkel wanted to hear a song from the repertoire of the punk princess at the “Big Evening Dawn”, she has long forgiven Hagen for her attack.

Well, what did other German politicians include in their playlists? As it turned out, there were some surprises in the past. For example, the former Minister of Defense of Germany Thomas de Maiziere introduced into his musical selection a completely frivolous hit “Life is Life” by the Austrian pop-rock group Opus – a song that usually sounds on the famous “Ballrmann-6”, a hangout place Germans in the resort area of ​​Platja de Palma in Mallorca.

Incidentally, Ludwig van Beethoven’s “Ode to Joy”, which has become the anthem of Europe, seems to be especially fond of the retiring German politicians. It has already been asked three times to perform it at the “Great Evening Dawn”, including by former German Defense Minister Ursula von der Leyen, who then moved to Brussels, where she took over as chairman of the European Commission.

An ancient ritual of controversy

The tradition of the farewell ceremony dates back to the 16th century. In the Middle Ages, people drank and gambled a lot in military camps in the evenings. But at a certain hour, drumming was heard – and the soldiers immediately had to hammer a cork into the barrel of beer. This meant that it was time for the rest of the night, and the beer should no longer filter out of the barrels. 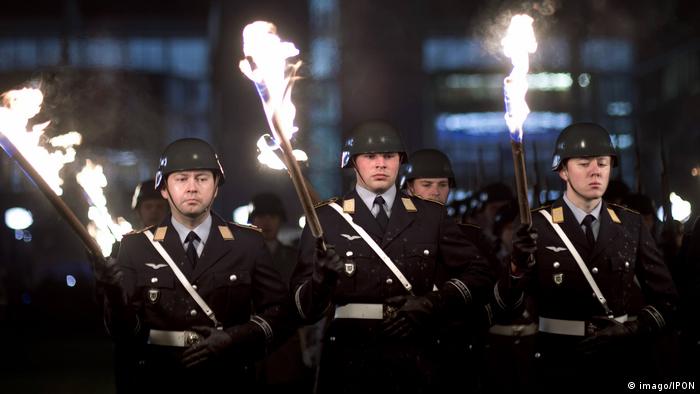 An officer on duty or a sergeant major, making a round of the camp, accompanied by a drummer and a piper, knocked on the necks of the barrels with a stick or saber, which meant an unconditional order to stop pouring beer. And the drummer and piper played the signal – Zapfenstreich. This old German word translates not only as “blow on the taps of beer barrels”, but also as “evening dawn” (signal), as well as “lights out”. In any case, according to this musical command, silence reigned in the camp, life in it froze. And anyone who did not obey order faced severe punishment.

Centuries later, the “Zapfenstreich” evolved into a spectacular ceremony held in Germany today. The event, which delights many, is also controversial. For example, not everyone welcomed the organization of this solemn ceremony for the Bundeswehr soldiers who returned from Afghanistan. There are Germans who demand that it be banned altogether: the torchlight procession of the Bundeswehr in sparkling steel helmets makes them associate with the Nazi marches of the “Third Reich”. However, most people still consider this ceremony to be a wonderful ancient ritual, transmitting the socio-cultural traditions of Germany from the past to the future.

Schalke 04: This is how Schalke wants to keep Thomas Ouwejan – Bundesliga

After a glorious career: Maor Bouzaglo retires from...

DMK government does not provide relief to farmers...

A new bill on sanctions against Russia has...

After a stormy week: the sun came out...

Covid, the ISS: “For the unvaccinated the mortality...

“I feel good, because I’m vaccinated. Go get...