Are Flink and Getir the good ones? 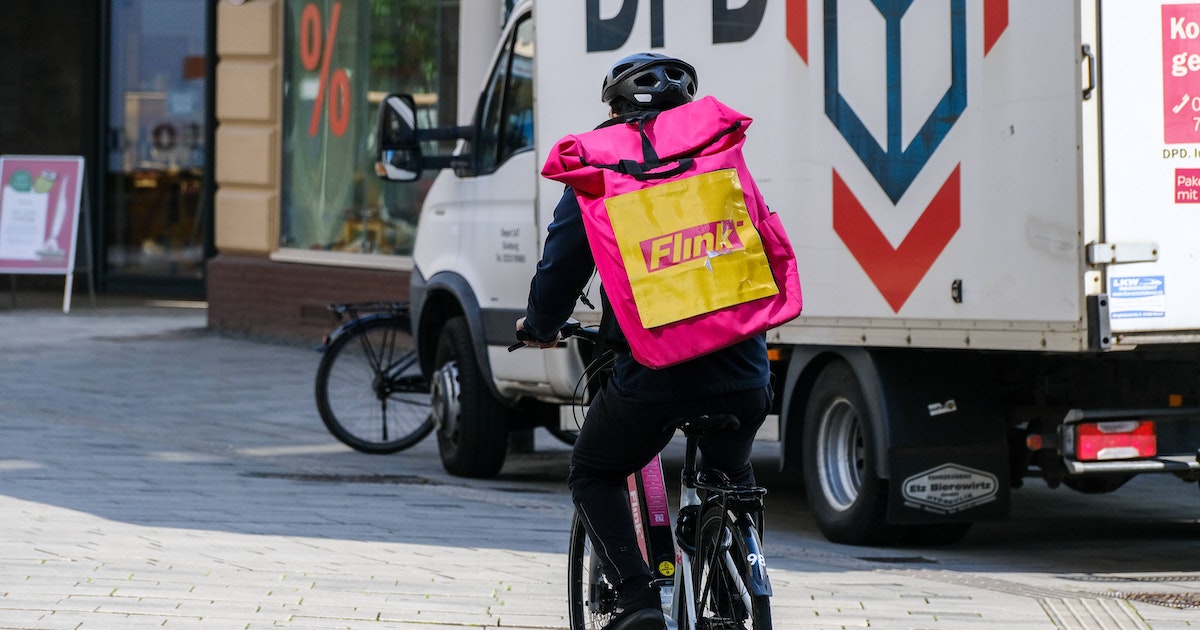 Berlin – Things went great for gorillas for exactly one year. With the push of Corona and the slogan “Faster than you”, the Berlin start-up reliably supplied the better-off city dweller in his city apartment with the urgently needed ingredients for a Bolognese sauce, toilet paper or food for the cat. Less than a quarter of an hour after the order was placed, the messenger stood on the threshold. But when at the beginning of June those couriers protested against the dismissal of a colleague with what was believed to be a stunted worker solidarity, the public also learned about the world behind the hype about the Lonesome Rider with their black backpacks.

The employees blocked depots and went on strike for better working conditions, on-time pay and permanent employment. Since then, the protests have flared up again and again, and it doesn’t look like it will be quiet again for gorillas anytime soon. On the other hand, it is noticeably quiet with the competition, which operates with an identical business model. Is there no reason to complain there?

The US company Gopuff founded in 2013 as a model

The established unions are surprisingly ignorant of this. In fact, Verdi and the food-pleasure-restaurants union were initially busy for months clarifying the responsibility for the traveling retailers among themselves. This has been decided for three weeks and Verdi is therefore responsible. But the interest in the widely dispersed industry with probably little prospect of paying members there is apparently not particularly great.

But even with what it claims to be the “anarcho-syndicalist trade union federation” FAU, which has existed since 1977 and in the past has repeatedly advocated bicycle couriers from, for example, Lieferando, nothing has been heard of simmering displeasure among the gorillas competition.

The closest competitor to Gorillas is the start-up Flink. It was not until December last year that the ex-Home24 boss Christoph Cordes and the Foodora founder Julian Dames, among others, pushed it. To a certain extent, Swift is a clone of gorillas, just as Gorillas is a copy of the US company Gopuff, which has existed since 2013. They all operate small depots in their business area, from which they deliver goods ordered via app. Flink also promises delivery within ten minutes.

The company’s head office is located in Kreuzberger Lobeckstraße. From there, the stores are now run in 25 cities. Although the company has only been in existence for six months, it already employs more than 1,000 people.

Flink spokesman: “We have definitely benefited”

When asked about working conditions, break rooms or participation, Flink points out that the company is still young. “Most of our employees are still in their probationary period,” says Boris Radke, who has already headed the communications departments at Zalando and the billion-dollar Berlin travel start-up Omio. Now he is advising a fast delivery service that has so far received $ 290 million from investors.

In line with his new role, Radke let it be known that he has not been in a supermarket for three months and that he is receiving regular deliveries. Did Flink benefit from the gorilla protests? “Definitely,” says Radke. One or the other customer must have changed providers out of solidarity. He cannot prove it. What is certain, however, is that Gorillas is already trying to keep regular customers interested with discounts.

In Berlin, Flink currently employs around 100 drivers and pickers who assemble the deliveries in the currently ten depots. At 1.90 euros, the delivery fee is ten cents more expensive than that of gorillas. In fact, most of the employment contracts for drivers and pickers are fixed-term, even at Flink. But at least the duration is two years – twice as long as with gorillas.

The hourly wage paid – for Gorillas it is 10.50 euros – is estimated at Flink at “just under eleven euros”. They are based on the starting wage of the Berlin retail tariff, they say. But it is currently at 12.35 euros. The weekly working time is 36 hours. Overtime would be paid, modern e-bikes, weatherproof work clothes and helmets would of course be made available, says company spokesman Simon Birkenfeld.

The Turkish company Getir (in German: bring) is trying to use the conflict with Gorillas offensive for its own positioning. The company, which has existed for six years, started in Berlin exactly one week after the first gorillas strikes. “We treat our couriers differently from other companies. And I think that will make a difference, ”said company boss and founder Nazim Salur recently in the FAZ.

As we learned upon request, the Getir couriers are out and about with appropriately equipped e-bikes or e-mopeds. None of the couriers have to carry a backpack. In addition, the employment contracts are unlimited, the hourly wage of 10.50 euros is expressly referred to as the starting wage. But Radke also announces that Flink will move away from contractual practice. “The competition for drivers is tough. Nobody can afford to only offer fixed-term contracts. “

However, Markus Grabka does not believe that open-ended contracts will be enough. “People will ask for more money, and they will be able to do it,” says Grabka, who conducts research specifically in the area of ​​income distribution at the socio-economic panel of the German Institute for Economic Research in Berlin. The sociologist sees the reason for this in the development of the low-wage sector in Germany, in which an employee receives less than two thirds of the average wage of everyone, currently at most 11.05 euros an hour.

This area has been shrinking steadily for about four years, according to the economic researcher, and will presumably continue to shrink. Because labor would become scarce everywhere because of demographic change and therefore more and more valuable. At the same time, Grabka recognized a new level of self-confidence among employees. “In the long run, companies will have to come up with something to get people. Just offering a job is no longer enough, ”says Grabka.

A trend that has already been confirmed in the catering industry. In Berlin, too, thousands have left the industry because of comparatively poor pay. For the new business model of fast delivery in this country, however, low wages are the basis for getting the cost-intensive construct up and running. Nobody earns money here yet, but hundreds of millions of euros are pouring in in the hope that the pushed company will become number one in the market and that its fast delivery app will at best be the only one on the cell phones of potential customers. No investor likes to read negative headlines like those about gorillas.

In Berlin, a good half a dozen large providers are now competing for pole position for the big race. The Finnish restaurant delivery service Wolt has just announced that it will expand its delivery business to include goods from the supermarket range and will have 2,300 drivers available in Berlin alone. They work on the basis of six-month contracts and basic wages of ten euros per hour, with deliveries and kilometers paid extra. “On average, couriers in Berlin earn between twelve and 15 euros plus a mileage allowance,” says Fabio Adlassnigg from Wolt. Orders assumed. The competition is raging.

Why Japan now has its highest number of deaths from covid after 2 years with the pandemic under control
Posted onFebruary 4, 2023February 4, 2023
Menu