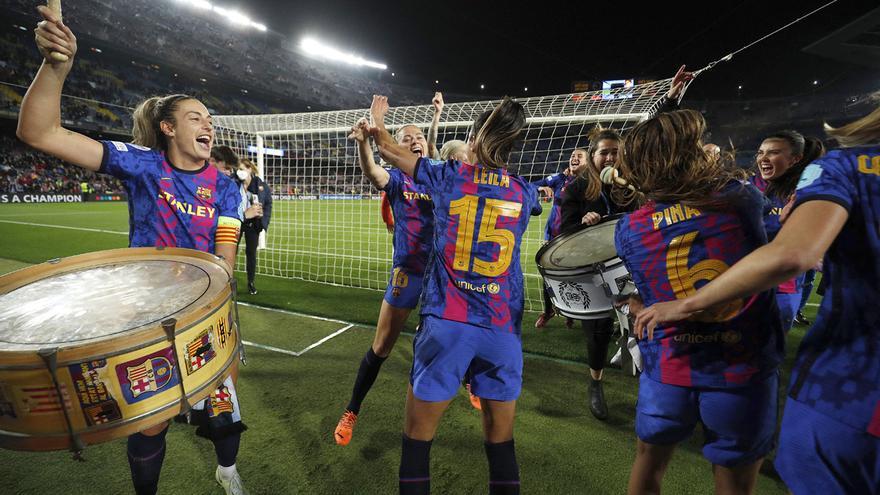 Thousands and thousands of happy people descended on the way to the Barça temple. Gangs of friends and friends went. Entire families. Girls and boys. From the corner of their eyes, they looked at the sky. At first, not a drop of rain. Two hours before the ball rolled through the well-kept Camp Nou lawn, there was a sensation of a great afternoon / evening. Very big. And it was.

Up to 91,553 people gathered at the Barça stadium to attend Barça-Madrid in the Women’s Champions League. In Europe there have never been so many people watching a game. Not in the world. He surpassed the United States record and on the occasion of a World Cup, which dates back to 1999.

It is a night for history that of March 30, 2022 at the culé home savoring every second of that pass to the semifinals with a victory that will never be forgotten (5-2) to sign a world record.

Those thousands of smiling people walked, aware that they were attending something unique. A match never seen before. A party that should not be the top of something but “the beginning of a new era”, as predicted Alexia Putellasthe best player in the world.

An era in which they ended up making waves after a superb reaction from Barça to the goal of Zornoza (1-2). In just 10 minutes, the azulgranas scored three goals that shook the foundations of the old Camp Nou, causing even the wave with that wonderful victory.

And that the city collapsed in such a way that it caused endless traffic jams in the vicinity of the stadium, delaying the arrival of the game, which was surrounded by a special halo as it showed that it did not take even half an hour and the Barça’s anthem on a couple of occasions, with mosaics arising spontaneously from the heart of the culé fans. To understand the dimension of what happened in the stadium, the Barça-Madrid of the Santander League brought together 86,422 spectators last October.

And in the 67th minute, already 4-2 for Barça, the stadium rescued its most creative version with a song never heard before either. “Where are you Florentino? Florentino, where are you?”

The Camp Nou needed almost 40 minutes of play to gather the thousands of people who went in procession feeling like the main actors of an afternoon for history, with a spectacular atmosphere, which transcends far beyond the purely sporting. It’s the future. It has arrived.

And in the 67th minute, already 4-2 for Barça, the stadium rescued its most creative version with a song never heard before either. “Where are you Florentino? Florentino, where are you?” Not a trace of the president of Madrid in the box, where Joan Laporta was accompanied by Pere Aragonés, the president of the Generalitat. A week ago, Florentino Pérez did not go to Valdebebas, the Madrid sports city in the 1-3 first leg.

A chant, once the world record of 91,553 spectators was known, was repeated again asking where the president of the white club was. No sign.

The sky was blue, radiant blue over the Camp Nou, as if trying to respect the magnitude of the event. Little accustomed as this old temple is, built in 1957, forced to an urgent and true reform because the passage of time, more than half a century, has deteriorated it.

From Imma to Alexia

But still, old and worn as he is, he was moved because he had never enjoyed such an encounter before. A Barça-Madrid women’s Champions. A women’s Barça-Madrid honoring the daring, revolutionary and singular idea of Inma Cabeceranthat 18-year-old girl who in November 1970 knocked on the door of the office of Agustí Montal, then president of Barça. “I want there to be a women’s team,” he told her then, without knowing how or when he would do it.

A month later, Christmas 1970, already in the final years of the Franco regime, they played in white – the club did not let them wear either the Barça colors or the shield, although they, stubborn and obstinate in their dream, managed to get their socks to least of all they had the blue and maroon that connects with the culture of the club- the first game that broke the true glass ceiling.

It all started with Imma’s audacity, but without the indestructible willpower of Núria Llansà, president, coach, sports director, psychologist, mother and partner, who endured the endless journey through the desert of misunderstanding and insults, in addition to the despicable general rejection nothing of what happened this afternoon at the Camp Nou would have happened.

Imma began that enormous work, Núria gave him life when everyone was pushing him towards disappearance and Alexia, which has provided universal and planetary flight to the drive of those pioneers, are united by that plot line that reached its maximum expression in the duel against Madrid. It was an unreal match. Not even dreamed of.

“Imagine it? No, because I only saw men play in this stadium. I knew I could play football, but I saw these dimensions as inaccessible,” he admitted. Alexia PutellasBallon d’Or, restless and nervous, feeling, once again, living in the center of a film for history.

History made! What an amazing crowd at tonight’s #UWCL match! pic.twitter.com/1CUTIjXNMY

“This can mark a before and after in women’s football,” predicted the talented player who has achieved perfection with the ball between her delicate feet. And Alexia marked it. Of course yes.

The immense loudspeaker of the Camp Nou

He was not wrong. Nothing will be the same as before. Not much less. “Barça is the biggest club and has that loudspeaker,” he announced. Alexia, while the Madrid players, for whom the Bernabéu remains, for the time being, a closed preserve, appeared through the locker room tunnel looking amazed at what they had around them. A majestic and old stadium, capable of gathering 100,000 people, but whose emptiness imposes even more.

They took photos to remember the afternoon when they stepped on the grass of such an immense field for the first time. Even videos. And some of them even ran celebrating a fictitious goal. When Barça came out to warm up, there were already more than 10,000 people in the stands. There was still an hour left before the start of the meeting. When the name of Alexia Putellas an ovation thundered.

With the game already underway, hundreds of people were running around the stadium because they were late. And they didn’t want to miss a thing that was going on inside, with a magic-filled crash, the ‘More than empowerment’ mosaic emerging.

With Xavi and Puyol in the box of the Camp Nou, to which people kept arriving and more people, the game acquired a more exciting tone after the goal of Mapi Leon (1-0, m. 8), equalized immediately by the penalty scored by Olga (1-1, m. 16).

A football reaction and emotion

After the first half, with that equalizer on the scoreboard (1-3 in the first leg for the azulgranas), it began to rain on the stadium, like that monumental goal by Claudia Zornoza (1-2, m. 48) from 45 meters, quickly matched by Aitana Bonmatí (2-2, m. 51) with a precise left-footed shot symbolizing his joy with that of thousands of Catalans and 14, which was Cruyff’s, behind him.

After Madrid’s 1-2 draw, as soon as the second half began, a gale from Barça unleashed a wave of euphoria with 10 unforgettable minutes scoring three goals

Even though Claudia Pinawith another wonderful left foot, although it seemed that he wanted to cross, he put the Camp Nou on its feet in a few magical minutes (3-2, m. 55) emerging, again, the mosaic, thundering, once again, the anthem using then the flashlight of mobile phones as a source of light to provoke another image to remember.

It was missing, of course, the goal of Alexia (4-2, m. 62) so that the party was even more round, even though the ball entered sweetly after Misa, the Madrid goalkeeper, saw her hands break. And the most festive Camp Nou in recent years chanted the name of Alexia. But four were not enough. came the fifth Graham Hansen in a furious second half full of football and emotion (5-2, m. 70).

And Barça began to make the lap of honor around the Camp Nou, with Madrid offering a gesture of greatness, applauding the Barça fans, while they held out on the pitch in an example of sportsmanship. No, it was not a Champions League that the Catalans were celebrating. Not even a League. Nor the value of an unusual record that places the team and, of course, the club, at the top of the world. It was the recognition of a job well done, dignifying the legacy that Imma and her friends built in 1970. United States, Finland… these countries where handwriting is declining in the face of keyboards
Posted onOctober 5, 2022

modulation according to the voted conjuncture, and after?
Posted onOctober 5, 2022