Better to strike than bike: the gorillas’ bicycle parade 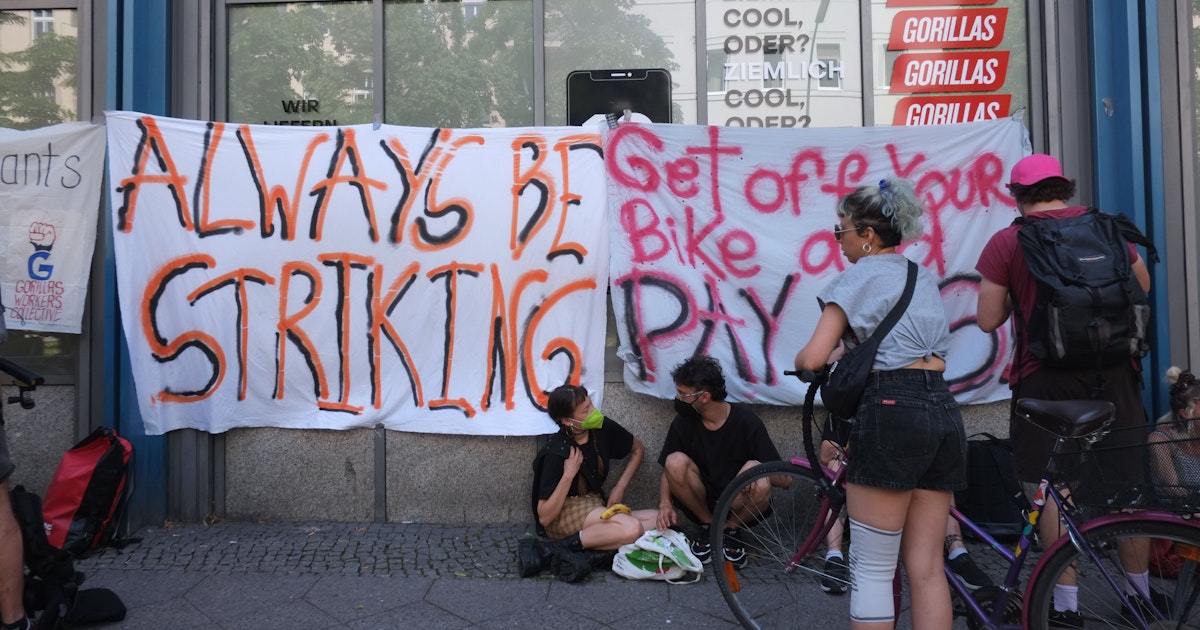 Berlin – Several dozen employees of the Gorillas delivery service and supporters protested in Kreuzberg and Neukölln on Saturday. The “Gorillas Workers Collective” (GWC), the collective under which the couriers and department store employees have been organizing for several months, had called. The starting point for the campaign was the department store on the Kaiserkorso, near the airlift square.

The background to the protest is a catalog of demands that the GWC submitted to the company’s management and published on June 28th. For example, the employees are calling for a better distribution of the load on the orders that the couriers deliver in backpacks to customers throughout Berlin – in less than ten minutes each, according to the promise of the startup, which was founded just a year ago. Organized workers demand that bicycles be equipped with luggage racks, as well as better and equal pay for employees and better equipment. They also complain about a lack of salaries, such as in cases of illness, and redundancies that are incomprehensible from their point of view.

The company did not react until the deadline set by the initiators last Wednesday. The protest on Saturday is again the response of the employees. You feel that you are not taken seriously by founder and CEO Kagan Sümer. The aim of the event is “to involve all employees and to organize a better workplace with gorillas. A workplace where management actually listens to our demands, ”says Yasha from GWC over a megaphone.

The motto of the protest: “Always be Striking – Bike tour”. After there had been protests across Berlin and blockades of individual department stores due to the dismissal of an employee at the beginning of June, CEO Sümer announced that he would go on a bike tour to various department stores in Germany in order to speak to the employees there. Motto: “Always be riding”. But to this day it is not publicly known that the CEO of Gorillas went on a bicycle tour.

Hence the renewed protest, which in a certain way ironically copied the motto of the previously empty words of the company founder and whose initiators seem to mean it very seriously. “I’m here to meet other employees and get to know them because we can’t really do that in everyday work,” says a courier driver on the sidelines of the meeting. “If we meet face-to-face, we can form a community and build more solidarity among the workers”.

She feared that some workers would not take part in the protests for fear of being fired. The strikes of the gorillas have so far been wildcat strikes – no union has called for them, which in case of doubt deprives the strikers of their labor protection. A focus of the protest is therefore also on the discussions with other employees, say those present.

The mood at the department store on the Kaiserkorso is subdued in the morning. The GWC had called the protest, but according to its own information, wanted to decide on the demo route and the procedure for the action not in advance, but on site with all those involved. That meant several votes in plenary on Saturday, for example on the question of the next station. Standing in a circle, Kurier Zeynep suggests the nearest department store on Urbanstrasse in Neukölln. Everyone’s hands go up. Done deal.

However, before the employees can make their way to the department store in Neukölln, the police have to wait for reinforcements to accompany the parade. It’s a demo weekend, the police are scarce, the streets are full – and the event was only registered as a rally. Cansel Kiziltepe, member of the Bundestag for the SPD from Kreuzberg, registered the demonstration.

Kiziltepe supports the labor struggles of the gorillas. “Workers’ rights are very important to me,” says the MP. “And we see more and more often that in the course of digitization these rights are circumvented, not taken into account.” In the case of gorillas, there are health protection measures that have to be “followed up”, also with regard to working time regulations and problems with remuneration.

Another point of conflict is the works council election for gorillas initiated by employees at the beginning of June. Since then, the company has repeatedly emphasized that it supports employee representatives, including in a statement on Saturday. “We expressly and unreservedly support the establishment of a works council at Gorillas and will of course provide all the necessary funds for this,” it says.

Operations stopped in FHAIN. Now they are sending the riders from FHAIN to the ALEX warehouse.

Regarding the protest, however, the company limited its support. One sees a difference between a future works council and the GWC because the collective is not officially elected. In front of the warehouse in Urbanstrasse, the second stop of the demonstration, the protesters called on their colleagues in the early afternoon to interrupt their shifts and go on strike. But the company called on employees not to take part in the protest before the end of the shift, says a courier. The responsible department store manager did not want to give the Berliner Zeitung any information on this. The company denies that there was a vote on participation in the department store.

After further negotiations with the police about the demo route, the protest march drove in small groups to the third warehouse in Muskauerstrasse. One goal of the protest, in addition to talks with the employees there and networking, is also to block operations for the day, the GWC tweeted in the late afternoon. In Kreuzberg and Friedrichshain, according to GWC, that was also successful.