The Sri Lankan government has protested against the recognition of May 18 as the Tamil Genocide Remembrance Day in the Canadian Parliament, and has summoned the Canadian High Commissioner in person to Sri Lanka and recorded the condemnation.

May 18 was recognized as the Tamil Genocide Remembrance Day in the Canadian Parliament on the eve of Mullivaikkal Memorial Day.

The Ministry of Foreign Affairs had said that the resolution passed in the Canadian Parliament would affect reconciliation efforts.

In response to this situation, the Canadian High Commissioner to Sri Lanka Amanda Strohan today summoned Amanda Strohan to the Minister of Foreign Affairs. Peiris has recorded the condemnation.

The Minister of External Affairs pointed out that the contents of the motion were false.

He said the resolution passed in the Canadian Parliament was spreading false objections to Sri Lanka.

He called for action to be taken to rectify the mistakes contained in the motion. 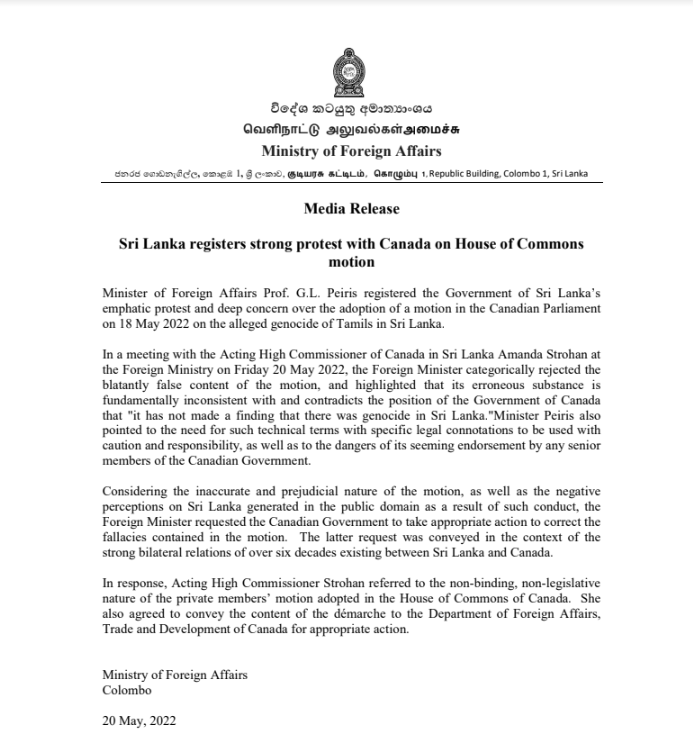 Globrands presents a quarterly report: This is the dividend that will be distributed in light of the profits

First publication: Secret negotiations on the transfer of...

Although his image suffers the impact of the...