Canary Islands: You can watch whales and dolphins off Tenerife 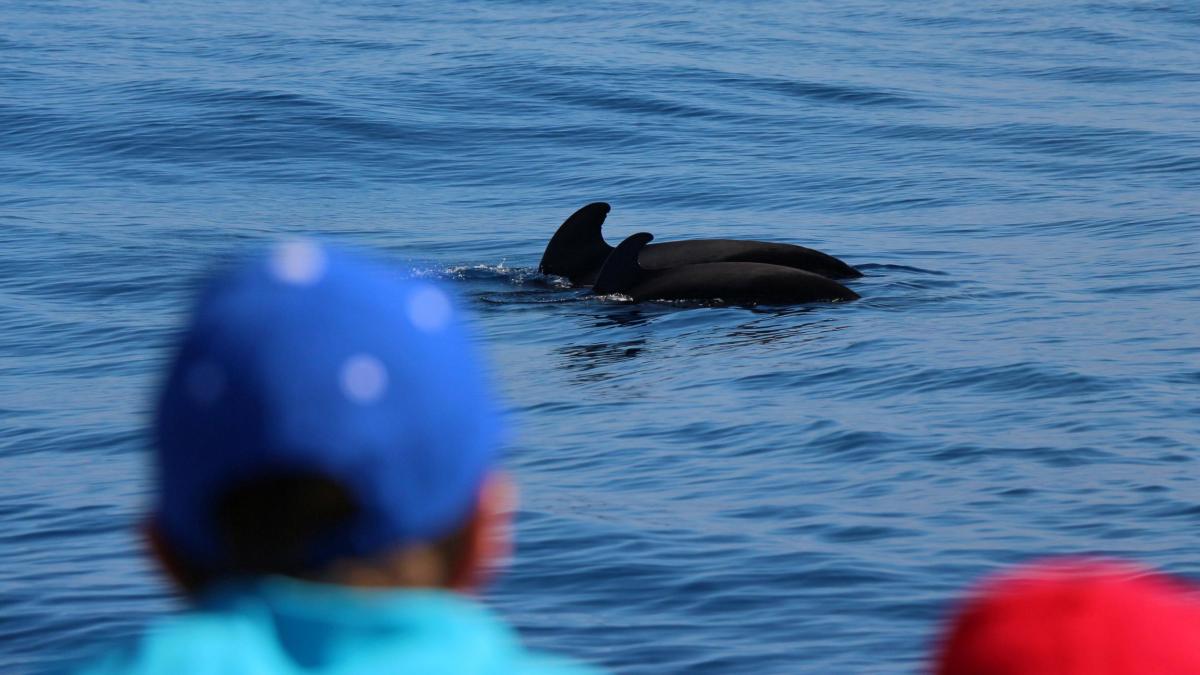 Whe veil envelops the mountain ridges of the largest Canary Island. The sun is a long time coming. Now, shortly before nine o’clock, the world is still in order in the port of Puerto Colón in Playa de las Américas: the large and small motor boats, catamarans and sleek sailing yachts bob around in the sports harbor on Tenerife’s Costa Adeje. Jet skis lie between the boats. The personal watercraft, painted in flashy colors, are out and about all over the coast during the day.

For Sergio David Hernandez Herrera from the provider Bonadea II, it is still a leisurely boat trip out of the port and onto the Atlantic in the morning. The certified whale watching guide has been traveling in the area between Tenerife and La Gomera for over 25 years – a strip of sea that was recognized as a whale cultural heritage at the beginning of the year by the World Cetacean Alliance (WCA) – an international association of NGOs, but also commercial whale watching companies (Whale Heritage Site).

The area between Punta Del Fraile and Punta Salema is the first whale sanctuary with sustainable whale watching in Europe. So far there are only a few other areas worldwide with this protection status, namely Hervey Bay in Australia and The Bluff in South Africa.

“The prerequisite for the award was a scientifically supported certification process by the WCA,” says the Spaniard, who has always lived in Tenerife and, as he says, values ​​the sea and its inhabitants. Strict rules for whale watching must also be adhered to. It is important that this is steered in line, because more and more tourists want to experience the sea giants in their habitat, especially in the waters off the Canary Island volcanic island.

“Nowhere else in the world do you come across so many whales and dolphins after a 15-minute boat ride as here,” claims Herrera. The marine mammals seem to feel particularly well in the nutrient-rich, clear and deep waters with pleasant bathing temperatures all year round.

A maximum of three boats at a time

Herrera is particularly concerned not only to enable its guests to experience nature, to see a whale with their own eyes, but also to give as much knowledge as possible about the giants of the oceans along the way. “This is how they learn to appreciate nature and ultimately to protect it.” With him on the Zodiac, the rubber dinghy with the solid hull, is a young couple from Catalonia today. The woman says that the two made a conscious decision in favor of an ecologically sustainable provider.

A long way from the bow of the boat, the surface of the water ripples. Then suddenly a fountain shoots up. A black, curved dorsal fin emerges. Shortly afterwards another, then another. Three short-finned pilot whales come to the surface to breathe. Typically, pilot whales dive up to 600 meters deep for squids and other fish for ten minutes or more and then come back up, explains the guide.

The animals, which, like the long-finned pilot whales living further north, belong to the family of dolphins, weigh up to two tons and are often over five meters long. However, this does not prevent them from gliding extremely elegantly through the water. The tourists on board take one photo after the other.

Meanwhile, the captain of the inflatable boat concentrates on the self-imposed rules: In order not to disturb the whales, a maximum of three boats should stay with one group for a maximum of half an hour. The distance when approaching must be at least 60 meters.

“Sometimes the animals come closer on their own,” says Herrera. As soon as the animals feel disturbed, the area must be left. Bathing, feeding and touching the animals is prohibited. It should go without saying that you keep quiet in this distant situation and don’t leave any rubbish behind.

Whales and dolphins off the coast of Tenerife

Over 20 species of whales and dolphins can be seen off the coast of Tenerife. The great sperm whale and the fin whale with a length of up to 25 meters are only found sporadically, as well as spotted dolphins, rough-toothed dolphins and round-headed dolphins. But the pilot whales mean well with their visitors that day. Black fins cut through the water at short intervals.

The groups with up to 20 animals are led by a mostly male leader. This is where the English name comes from: “Pilot Whale”. After a gestation period of 16 months, female pilot whales give birth to a young that they care for for four years. Only then are the offspring ready for the next mating. As guide Sergio talks, more and more boats appear – which prompts him to keep going.

With a trained eye, on the two-hour tour, he keeps discovering rubbish that he pulls out of the water with the boat hook. Including a line several meters long that floats in the water. Whales and dolphins could easily get caught in it.

Bottlenose dolphins can actually be seen on this boat trip, the most famous dolphins since the US adventure film “Flipper” from the sixties. They live all year round off Tenerife’s coast, so that boat safaris are almost guaranteed to be sighted. Bottlenose dolphins are currently swimming on the starboard side of the boat, only to come back to the surface of the water shortly afterwards on the left.

Garbage can be deadly to animals

You are in good company and the dolphins’ fins glisten in the glaring light of the sun, which gradually penetrates the clouds. The two Catalans are clearly enjoying the natural spectacle. The couple can’t get enough of the grace of the dolphins, who play so carefree with the water and also let themselves be carried away by a few jumps. Then the surfers disappeared again for the time being.

Elsewhere, bottlenose dolphins cannot move freely. “Unfortunately there are still water parks with dolphinariums on the island,” Sergio Herrera regrets. He can’t understand why you’d rather go to a show with caged animals than go out to sea. Bottlenose dolphins, which weigh up to 500 kilograms and are around two and a half meters tall, can live to be over 30 years old.

The Spaniard once again briefly interrupts his journey to fish a large white and red plastic bag out of the water: “If a turtle gets caught in it, it is its death sentence,” he says, shaking his head. Up to five species of sea turtles are at home in the Canarian waters, with the loggerhead sea turtle and the green sea turtle being the most common.

On the way back to Puerto Colón, roaring jet skis, catamarans with partying guests and speedboats that race across the water cross the course. The daily hustle and bustle on the water is a thorn in the side of animal rights activists like Herrera.

In 2019, underwater photographer Francis Pérez took a photo very close by that Herrera is reluctant to remember, but presents it to his guests on his mobile phone as a warning. It shows a pilot whale with a severed tail fin. After the autopsy, it was clear that he had lost it to a boat’s propeller. The animal could no longer be helped, it had to be euthanized. The photo stands for the global problem of collisions between marine animals and ships, complains Herrera.

In whale sanctuaries, the animals should also be protected from such accidents, and yet Sergio Herrera remains skeptical about a major construction project: A new ferry port in the coastal town of Fonsalía on Tenerife has been planned and controversial for years. The major project is to create additional ferry connections from Tenerife to La Gomera, El Hierro and La Palma, over 450 berths for pleasure craft and yachts and a breakwater over 700 meters long.

This is probably good for tourism, says Herrera, but the project would also endanger the biodiversity of the Canaries and the lives of marine mammals. The island council supports the project, many scientists and environmentalists are against it.

Herrera steers his guests around the departing boats, which apparently cannot get out to sea fast enough in the bright sunshine. A foretaste of what the marine mammals can expect once the new port is up and running.

Getting there: Several airlines, including Lufthansa (lufthansa.com), Condor (condor.com), Swiss (swiss.com) and Iberia (iberia.com), fly from the larger airports in Germany to Tenerife, sometimes with transfers.

Accommodation: The rooms of the new hotel “H10 Atlantic Sunset” in Playa Paraíso offer partly sea views, double rooms with balcony from 249 euros (h10hotels.com). The Sheraton La Caleta Resort & Spa is located five kilometers from the port of Adeje, directly by the sea, double rooms from 170 euros with breakfast (marriott.com).

Corona rules: Anyone who has been vaccinated, recovered or tested is allowed to enter the country, but must also register electronically on the Spain Travel Health portal (spth.gob.es). The Federal Foreign Office offers further information on its homepage (Auswaertiges-amt.de).

Participation in the trip was supported by Tenerife Tourism. You can find our standards of transparency and journalistic independence at www.axelspringer.de/unabhaengigkeit