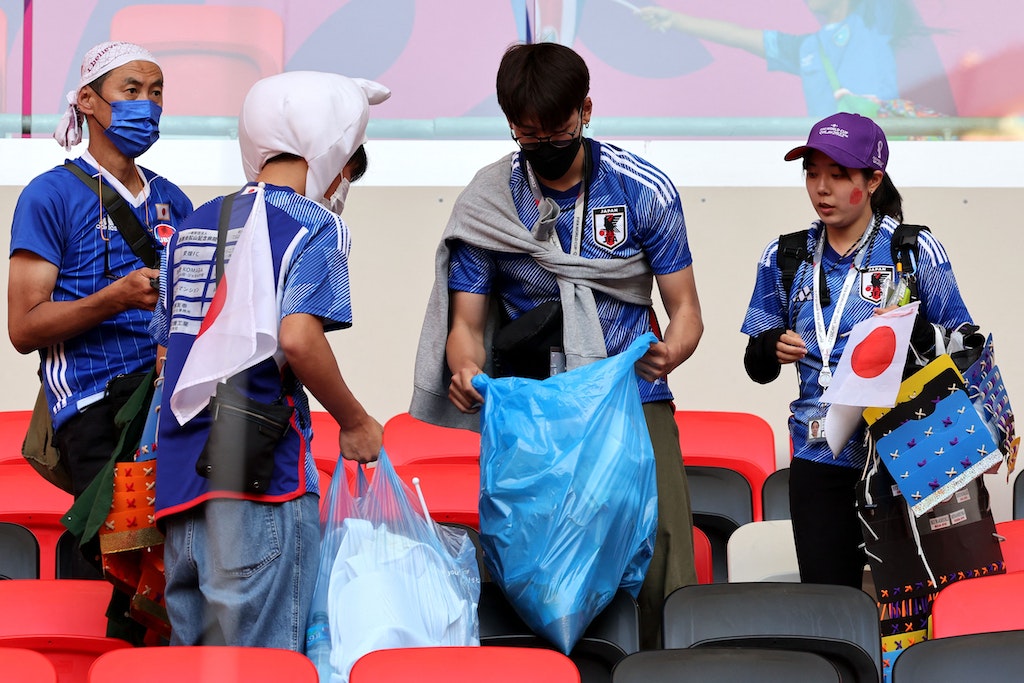 At the World Cup, the Japanese team and their fans caused a stir because they left the dressing room and stands tidy. Where does it come from?

Japanese fans in Qatar clean up the stadium after the game. AFP

It was the image that enthralled even those who aren’t into football: a spotlessly clean dressing room, taken not before the game but after it, and that too after a heroically fought victory that gave plenty of cause for celebration. At the men’s World Cup, which has been going on for a week and a half, Japan won its first group game after falling behind 2-1 against Germany. But the dressing room didn’t look like the battlefield after a victory celebration. On the contrary.

The photo taken by the cleaning crew in the host country of Qatar caused a sensation because it apparently documented a unique Japanese selling point. No other country is reported to have left their dressing room in such a tidy state. But the pictures of the Japanese in Qatar are nothing new either: At every World Cup, the Japanese dressing room looks very neat after a game, after every game.

Qatar like Kazan? Is there a déjà vu for the DFB team?

When the Japanese team, which is characterized by top performers from German Bundesliga clubs, fights against Spain for a place in the round of 16 this Thursday, the cleaning staff at the World Cup should keep their fingers crossed for the Japanese. If the “Samurai Blue”, as the Japanese team is also called in reference to their blue jerseys, are eliminated from the tournament at the end of the group phase, they should at least delight the world with their love of order and cleanliness for the last time.

Part of the issue here is a kind of patriotism that goes beyond just winning. Because the desire to leave a positive impression of one’s own culture abroad is probably more pronounced in Japan than in many other countries. In the Japanese Football Museum in downtown Tokyo, for example, there are not only several football trophies and references to the 2002 World Cup in their own country. It also proudly displays that Japanese teams often win the Fair Play award. The message: Japan stands for compliance and respect.

And something similar is behind the consistently clean cabins after use by Japanese athletes. While the focus is on respect for the hosts, it is no coincidence that this is expressed not least in order and cleanliness. These are important virtues in the East Asian country. Japanese football fans at home and abroad can also be seen cleaning up the sections of the stands they have occupied after the game before leaving the stadium.

This connection probably has its origins in the Japanese original religion Shinto, which places a lot of value on cleanliness. Before visiting a shrine, one washes one’s hands, sometimes also one’s mouth, in order to be as clean as possible for the visit to the gods inhabited by the shrine. The Japanese word “kirei” means both beautiful and clean. It is therefore hardly surprising that the streetscape in Japanese cities is usually very clean and tidy compared to other countries.

Practically nobody throws their rubbish on the ground, in larger cities cleaning crews sweep the streets at night. At school, the offspring not only learn mathematics, Japanese characters and history, but also how to sweep the floor correctly and other basic rules of cleaning. Removing your own dirt is not primarily seen as an annoying task that you would rather leave to others, but as part of your own responsibility.

Against this background, it can also be explained why Japanese society has produced a kind of tidying superstar in the form of the book author Marie Kondo over the past few years. Kondo brought order and tidying together with a basic Shinto idea: the appreciation for everything – not just people, but also commodities that are useful to you. Even objects deserve good treatment. Kondo became world famous with it, but actually formulated a Japanese banality.

Tip kings: Hardly anyone is as smart as the very youngest national coach

In Japan, for example, it is hardly worth a headline that the domestic national team cleans changing rooms abroad, even though there are professional staff for this purpose. The enthusiastic feedback from the world football association Fifa and media from all over the world is more surprising, which ultimately also reveals how atypical this Japanese practice is. Although it doesn’t have to stay that way: When Japan’s team and fans attracted positive attention at the World Cup in Russia four years ago, they soon found imitators.

At least fans from Senegal, Uruguay and Saudi Arabia reported after World Cup matches how they cleaned up their rubbish themselves. That could happen again this time. As Japan progresses in the tournament, more people from other countries could still be inspired by clean dressing rooms and stands.