Commissario Ricciardi, the corrupt city in the “Vipera” comic 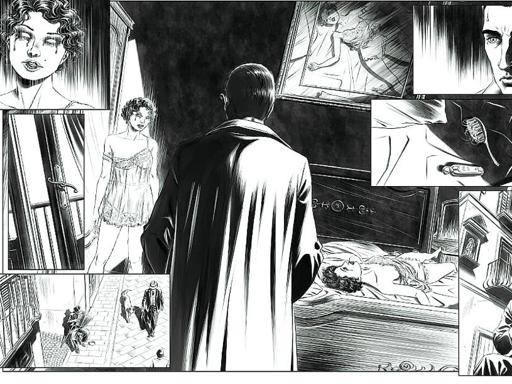 Giving a face to Ricciardi, Maione, Bambinella. The idea came to Sergio Bonelli Editore a few years ago. Even before Ricciardi took on the melancholy gaze of Lino Guanciale. Now it is no longer a novelty and readers have rarely had the privilege of seeing their favorites take on so many faces as they leave the pages of books. But Ricciardi, we must say, owes his success to himself and mainly to the writer who gave birth to his idea by losing himself in an image reflected in a Gambrinus window. A vision. With perfect timing, the Vipera register, the Easter novel, scripted by Professor Sergio Brancato, professor of Sociology of Communication and professor of screenwriting at the Comix School, and illustrated by Lucilla Stellato for Sergio Bonelli Editore, arrives in bookstores these days.

Thus the sixth novel in the now famous series by Maurizio de Giovanni becomes a comic. Almost a week is missing from the most important feast of Christianity, when Naples is bloodied by the murder of Rosaria Cennamo, the most beautiful prostitute in Paradise, the luxurious brothel in via Chiaia. Hypocrisy is the dominant theme of the novel, violence against the young woman appears in stark contrast to the sense of the holy feast that is about to come. Hypocrisy is also the dress that the fascist city has chosen to wear by closing its eyes, pretending not to see. Just like the beggar who fakes his blindness on the street corner. A decent neighborhood devoured by a cancer, which corrodes its respectability. In the brothel, young and beautiful women sell their bodies by exposing themselves to the most varied risks, while in the street below life flows carelessly.

the talent of Lucilla Stellato

To the innocent Viper, guilty only of her own poignant beauty, a condemnation in a reality conditioned by the prevailing machismo, has given a face to Lucilla Stellato. Salernitana, graduated from the Academy of Fine Arts, trained at the Italian School of Neapolitan Comix. A lively talent from an all-Campania team. Maurizio de Giovanni, who approved and shared Bonelli’s project, in fact required exclusively local workers to fill the imbalances that often exclude our artists from national creative paths. It is a great responsibility to draw the traits of such well-known and imagined characters.

For the face of Vipera – says Lucilla Stellato – at the suggestion of the teacher I was inspired by the actress Rosanna Schiaffino. With Brancato we are now a tried and tested artistic couple after having worked in perfect harmony on “The condemnation of blood”, the second novel in the series. We share every choice after long talks but usually his ideas are decisive. We draw from cinema, from songs, from photography. The web is a precious tool for my documentation work but I let myself be guided a lot by the words of de Giovanni. His descriptions are so meticulous and accurate that they allow me to accurately imagine the faces, gestures, physical characteristics of the characters.

With the double series of comics dedicated to Ricciardi and the Bastardi di Pizzofalcone, Bonelli has conceived a product of considerable quality and of great impact on readers from whose rib the idea of ​​creating Ricciardi’s short story magazine was born. Some taken from the author’s stories, others originals written by Professor Brancato himself. What he tells: The script of a comic requires a very rigorous and rational audiovisual language. We proceed with an almost scientific method to the analysis of the space-time units of the novel which are then distributed in 182 tables. In short, from novels to comics to TV, Commissioner Ricciardi confirms his transversal success. A black novel that goes beyond investigation – says de Giovanni – and meets a diverse audience, not just genre readers.

Naples in the Thirties

Ricciardi knows how to speak to everyone’s heart but certainly the power of the character appears equal to the strength of the city which is not just a background but shares the leading role with the commissioner. The city of the Thirties – continues Brancato – rich in cultural, aesthetic and social transformations. Perfect for comics. a painfully beautiful Naples. Will the eagerly awaited commissioner return in an upcoming novel? Maurizio de Giovanni is not unbalanced but promises: He will soon bring Maione and Bambinella to the theater.

Can I still use Twitter if Apple removes the app from iPhones?
Posted onDecember 6, 2022

Vijay TV Ram who built a huge house.. But the cutout, food is what no one expected – Oneindia Tamil
Posted onDecember 6, 2022
Menu