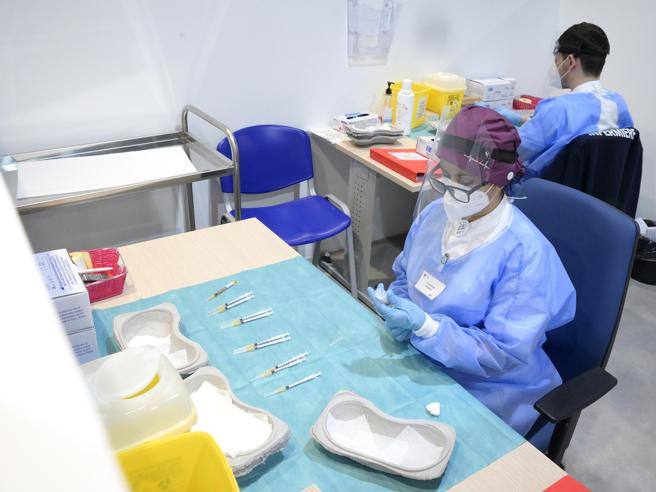 Covid cases worldwide exceed 122 million according to data released by Johns Hopkins University, while confirmed deaths exceed 2.7 million since the start of the pandemic. And in Italy the latest toll of 23,832 new cases and 401 deaths (here the bulletin with the data and here all the bulletins showing the situation since the beginning of the pandemic: here those of 2021, here those of 2020). Here is the map of the contagion.

15.46 – Locatelli (Cts): very high viral circulation, but slows down
There are small signs of improvement in the epidemic. Word of Franco Locatelli. also clear signs that there is a slowdown in the rate of growth, said the CTS coordinator who spoke on Rai 3 in the broadcast Half an hour more. The data tells us that the number of 1,400 lower than those of the previous week – he added -. We also have two data: the number of infected health workers declined very markedly as well as the number of infected in RSAs. We also see a decline in the over 80s population, where we have coverage of around 44% of vaccinated people. The 70-79 age range must now be increased – he concluded – where a 10% lethality rate is connoted.

14.51 – Hope: I am optimistic for the summer
Health Minister Roberto Speranza says he is confident for the next few months: For the summer I am optimistic, I have always been the hardest and most realistic one who was forced to always tell the truth, but now there are reasons to look with more confidence at the next few weeks, he told Sunday In. This is still a difficult moment – underlined Speranza – we must keep all precautions but with the passing of the weeks the situation will gradually improve, and already in the spring and then during the summer we will see a significant improvement. But there won’t be an X moment, it will be a gradual journey.

13.38 – Vaccines, next week no more than 200 thousand a day
the maximum average of vaccine administrations in Italy next week is just over 200 thousand per day. The calculation – which also emerges from a check made with the Covid Emergency Commissioner, Francesco Figliuolo – was performed based on the availability of current doses and those expected to arrive in the next seven days. According to what is learned, the inoculation capacity in the various structures of the country would already be about double the quantity of vials available.

12.38 pm – Philippines, record increase in cases
The Philippines, hit by a new wave of the Covid-19 pandemic, have decided to tighten restrictive measures to try to limit the spread of the virus. Within the red zone, one of the measures decided, only people between 18 and 65 years of age will be able to leave the house. Among the government prescriptions, even the use of a mask at home if you are not alone. Today alone in the Philippines, a country of 107 million inhabitants, there have been 7,757 additional cases of COVID-19. The total number of cases recorded in the Philippines had risen to 663,794 while confirmed deaths had reached 12,968, among the highest in Asia.

12.21 – Gimbe: from 3-4 days small signs of slowdown
In the last 3-4 days, there are small signs of a slowdown in the trend of the Covid epidemic in Italy which could represent the beginning of the effects of the new restrictive measures, which will be clearly visible 2-3 weeks after their introduction, he explains. the president of the Gimbe Foundation Nino Cartabellotta. As of March 20 in the medical area, the national figure (41%) exceeds the alert level of 40% with Lombardy (51%), Emilia Romagna (54%) and Piedmont (58%) that go over 50% and the Marche they reach 64%. In intensive care, the national figure (37%) well above the alert level of 30% with 6 regions exceeding 50%: Emilia Romagna, Piedmont and Umbria (53%), Lombardy (56%), Marche and Prov. aut of Trento (58%).

12.16 – Cremona, no one shows up for vaccinations
The inconveniences in Lombardy continue due to the delays and bureaucratic hitches to administer the vaccines. In Cremona this morning no one showed up at the Fair for the anti-covid vaccination, due to the failure to send text messages by Aria Lombardia, the company of the Region that manages reservations. Asst Cremona mobilized by calling those entitled to it.

11.48 – Bild, Merkel aims to extend the lockdown in April
German Chancellor Angela Merkel intends to extend the lockdown also for the month of April. This is anticipated by the draft that I will present tomorrow at the coronavirus summit with representatives of the Lander, obtained by Bild. The anti-covid plan set the end of measures to stem the virus on March 28.

11.46 – Assoturismo, tourism loses 1.4 billion turnover
Easter lost due to Covid would cost official accommodation facilities 11.3 million visitors, with a loss in turnover of 1.4 billion. These are the estimates of Cst for Assoturismo Confesercenti. An important loss, especially if we consider that the Easter holidays, this year, are in fact the only occasion for a spring break, given that April 25 coincides with Sunday and May 1st Saturday. The Easter break – explains Assoturismo – comes after a disastrous start to the year: the debacle of the winter season burned about 4 billion in turnover.

9.31 am – EU Summit in videoconference for a new wave of viruses
Next Thursday’s European summit will be held via videoconference due to the new wave of coronavirus in many member states. The president – wrote Barend Leyts, spokesman for the president of the European Council Charles Michel, in a Tweet. – in the meantime, consultations with all leaders will continue (here Draghi at his first videoconference with the EU Council).

9.05 am – The dead in the world exceed 2.7 million
Coronavirus-related deaths globally have surpassed 2.7 million, according to Johns Hopkins University. According to the American university since the beginning of the pandemic, the virus has killed at least 2,709,821 people worldwide. The threshold of two million victims was exceeded on January 15 last. At the same time, the overall balance of confirmed cases of contagion rose to 122,825,490. So far, 69,528,574 people have healed. The US remains the country with the highest number of deaths (541,914), followed by Brazil (292,752) and Mexico (197,827).

9.00 – From tomorrow the color map changes
After three weeks of almost returning to normal before Covid, Sardinia leaves the white area tomorrow and returns to the orange area. this is the main novelty of the new color map of Italy after the new ordinances signed by the Minister of Health Roberto Speranza, which will come into force on Monday 22 March. The other change represented by Molise, which turns orange, while the expiring ordinance relating to the red area in Campania has also been extended. On 3, 4 and 5 April 2021, the measures established for the red zone will be applied throughout the national territory, with the exception of the Regions or Autonomous Provinces whose territories are located in the white zone.

8.30 – A business: over 10 million Italians at risk of poverty
The economic crisis triggered by the health emergency has helped to extend the perimeter of people in difficulty: according to Unimpresa, at the end of 2020 there were 1.2 million more people in an economically unstable situation than in 2015, 13% more. There are over 10.4 million Italians at risk of poverty: between 4 million unemployed and 6.3 million employed but in economically weak situations.

6.00 am – Accelerated vaccines in Africa
Nearly 7 million doses of the Covid-19 vaccine have been administered in Africa. According to data from the World Health Organization, a total of 38 African countries have so far received more than 25 million doses and 30 have started their vaccination campaigns.

5.30 – Germany, almost 2.7 million cases
Cases are still growing in Germany: 13,733 infections have been registered, bringing the total cases to 2 million and 695,516 since the beginning of the epidemic. With 99 new deaths, the total number of deaths comes to 74,664.

Renfe orders trains that do not go through the tunnels
Posted onFebruary 4, 2023

Deepti Kapoor: “If you want the reader to be interested in something, tell him a thriller”
Posted onFebruary 4, 2023