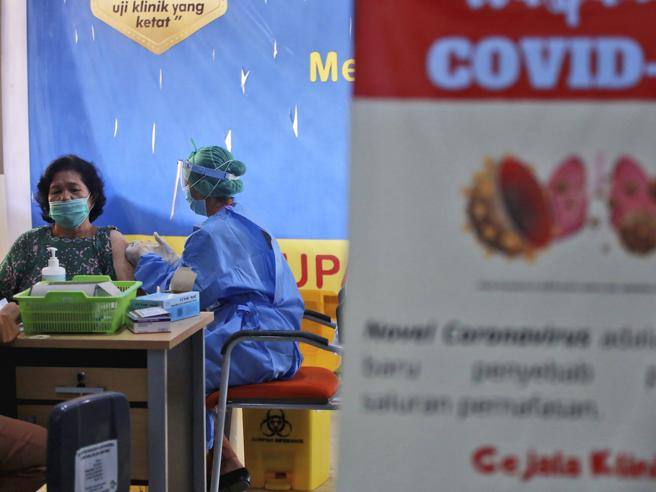 Covid cases worldwide exceed 114 million according to data released by Johns Hopkins University, while confirmed deaths exceed 2.5 million since the start of the pandemic. And in Italy the latest balance, relative to Sunday 7 March, of 23,641 new cases and 307 deaths (here the bulletin with the data and here all the bulletins showing the situation since the beginning of the pandemic). Here is the map of the contagion.

10.43 – Viggi is a candidate to be the first free virus country
With the mass vaccination last week that involved almost all the adult inhabitants, while the plan for the second dose is already being prepared, Viggi, in the province of Varese, is a candidate to be one of the first covid-free countries in Italy. Obviously we must keep all precautions, we cannot neglect the attentions followed up to now – said the mayor Emanuela Quintiglio – But I am confident, not only have we become a national model for the vaccination plan, but if it continues like this I would like to add that for the summer here we will be quiet, and I invite those looking for a holiday place to come and visit us.

10.30 – Virologist Crisanti: Another lockdown would exhaust the population
A national lockdown to be able to face the challenge of a mass anti-Covid vaccination, with unprecedented numbers? But it should be done once and for all. In reality I think that people are fed up, they no longer believe it: the virologist Andrea Crisanti, director of the Laboratory of Microbiology and Virology of the Hospital of Padua, said this, explaining that it is useless to lockdown, we remain like this. Otherwise the population is stressed, and we keep them indoors for 3 weeks without getting anything. People are exhausted from the color zones. A new national stop will be impossible, unless it is really the last. The summit for the new rules is scheduled today.

9.50 am – Gimbe: The third wave started
The third wave of the virus has started: the confirmation comes from Nino Cartabellotta, president of the Gimbe Foundation on Radio Cusano Campus. The apparent flat calm that began on January 20 and ended on February 20, two weeks ago the curve began to rise – explains Cartabellotta – the number of cases does not matter, but every 100 cases 5 go to the hospital and 0.5 go to intensive therapy. Apart from very small regional variations, this is the statistic. For this reason today we have 28% of the saturation of ICUs nationwide, but in some regions it is well over the 30% threshold.

9.32 am – White Sardinia, first test at the arrivals at the port of Olbia
the port of Olbia was the first to test the new system of health checks for those arriving in Sardinia, established by the order signed a few days ago by the governor Christian Solinas with the aim of preserving the island from the spread of the infection by Covid-19 and maintain white zone status (here how it works). Between 6.30 and 7.30 this morning three ships docked, two from Livorno and one from Civitavecchia, with a total of about 600 people on board.

9.00 – Families emergency, the aid will have retroactive effect
The measures to support families with children under the age of sixteen will have retroactive effect: this was assured by the Minister for the Family Elena Bonetti. The measures, which expired in December, provide for extraordinary paid leave of at least up to 50%, the right to smart working, support such as the babysitter voucher for self-employed workers and VAT numbers.

8.50 am – Clandestine parties in the Milanese area, fines flock
Still illegal nightlife in the Milanese area: over the weekend the carabinieri had to intervene to block several clandestine parties and gatherings. Last night, in Corso Roma, in Cologno Monzese, eight people were fined, all of Ecuadorian origin, who were celebrating in the house of one of their 32-year-old compatriots. In Paderno Dugnano instead, yesterday afternoon, shouts and loud music for a birthday party: 10 young people, all between 18 and 19 years old, and the owner, a 53 year old Italian, were fined.

8.47 am – Germany, 5 thousand infections: but it is beginning to loosen
In Germany there are 5,011 new cases of Coronavirus infection recorded in the last 24 hours and 34 deaths. The incidence rate of cases per 100 thousand inhabitants 68, equal to 56,518 infections in the last week and 122,300 active cases. The Robert Koch Institute specifies that the total number of infections since the beginning of the pandemic has reached 2,505,193 and 71,934 deaths have been attributed to Covid-19. But starting today in Germany the plan to gradually relax the restrictions: two families will be able to meet again in private for up to five people, with children under 14 excluded from the count. And bookstores, florists and garden stores will reopen. Massage centers, tattoo studios, driving and flight schools are also back in business, as long as customers have a negative test carried out the same day.

8.26 am – New Zealand, only the Pfizer vaccine will be used
New Zealand will only use the Pfizer vaccine: Prime Minister Jacinda Ardern announced it, explaining that the decision was made on the basis of the effectiveness of the vaccine. For now, New Zealand experts have only approved Pfizer and are reviewing the others (differences between vaccines here). Ardern explained that the country has ten million doses, enough to inject two doses to the 5 million residents.

8.20 am – China, the health certificate arrives
China will issue health certificates to allow international travel during the Covid-19 pandemic. And he said he was willing to collaborate with the International Olympic Committee to immunize athletes taking part in the Winter Olympics. It is not yet clear which countries will be included and if travelers in possession of the document will still have to undergo quarantine upon entering China.

8.00 am – Morocco, almost 4 million vaccinated
Although the numbers of the epidemic are not from emergency, Morocco is proceeding quickly with vaccinations: the number of people who have been given the first dose of the vaccine to date has reached 3,913,615, while 578,942 have received the second dose. The total number of deaths in Morocco was 8,682, with six new cases recorded in 24 hours, equating to a lethality rate of 1.8%.

7.57 am – In Brazil the cases exceed 11 million
The latest Johns Hopkins University balance sheet. According to the American university since the beginning of the pandemic, the country has registered a total of 11,019,344 infections, including 265,411 deaths. Brazil is the third country in the world for the number of infections after the United States and India and the second for the number of deaths after the United States. The Manaus variant hit the South American country hard.

7.54 am – Power, 22 elderly people died of Covid, two arrests
The accusation of culpable epidemic, manslaughter and circumvention of incapable persons: two precautionary custody orders in prison were issued by the Power Prosecutor’s Office against the two shareholders who own a home for the elderly in Marsicotevere, in the province of Potenza, 22 elderly people died from covid.