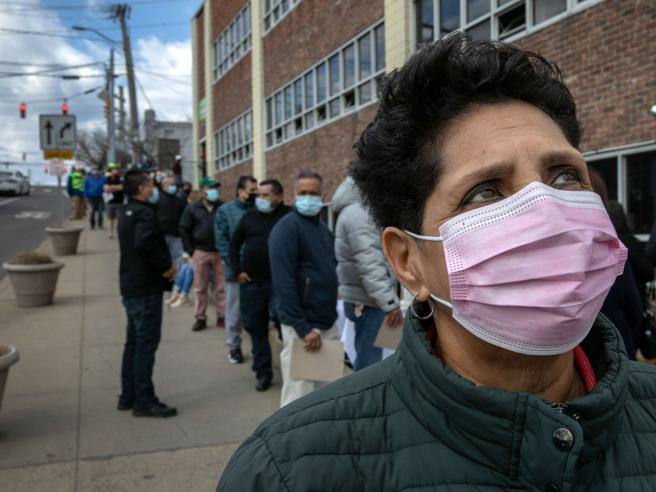 Covid cases worldwide exceed 119 million according to data released by Johns Hopkins University, while confirmed deaths exceed 2.6 million since the beginning of the pandemic. And in Italy the latest balance, relative to Saturday 13 March, of 26,062 new cases and 317 deaths (here the bulletin with the data and here all the bulletins showing the situation since the beginning of the pandemic: here those of 2021, here those of 2020). Here is the map of the contagion.

12.54 – Pyrrhus (Army): 120 doctors and 200 nurses enrolled in less than 30 days
In less than a month, the Army managed an extraordinary procedure for the direct enlistment of 120 medical officers and 200 nurse non-commissioned officers. This was stated by General Saverio Pirro, in charge of the drive through and the vaccine center of Cecchignola who specified: The exhausted health workers asked for help and the State responded with all possible structures, sending men and vehicles to help the population.

11.58 am – Beware of the false Aifa press release
A false AIFA press release is circulating online in which the use of different batches of AstraZeneca vaccine is prohibited. The Italian Medicines Agency denied the news by reiterating that the only batch of AstraZeneca vaccine subject to the ban on use on the national territory is the number ABV2856. The only reliable communications on the vaccination campaign are those available on the official website of the Italian Medicines Agency www.aifa.gov.it. The Ps Online Commissioner, a Facebook page of the State Police that updates users on the risks they run, especially on the web, warned of the danger of fraud.

11.53 am – Mayors of Sardinia opposed to arrivals from the red zone towards second homes
The possibility of moving from the red areas to second homes in the white areas is a very serious mistake of the Draghi government which cannot be accepted in any way in Sardinia. The president of the regional Anci, Emiliano Deiana, lapidary, after the publication of the Faq, the most frequently asked questions on the anti-Covid measures introduced by the decree law of March 13, in force from today until April 2 and on the day of 6 April, for Easter.

11.07 – Sputnik: agreement with Italy, Spain, France and Germany for production
The ok from the EMA not before May
Agreements have been reached to start production of the Sputnik V vaccine in Italy, Spain, France and Germany. This was reported by the Russian Fund for Direct Investments (RDIF) quoted by the Interfax agency, noting that negotiations are underway with a number of other producers to increase production in the EU. This will allow the start of the active supply of Sputnik V to the European market after receiving approval from the European Medicines Agency (EMA), with which a dialogue is now underway within the framework of the rolling review. On this issue, Marco Cavalry, Head of Ema’s Vaccine Strategy), stated that production standards are being checked against expectations. And that before May, however, Ema’s okay on Sputnik will not arrive.

11.04 – Aifa, purchase of anxiolytics increased by 12% in 2020
In 2020, from the first wave of Covid-19 onwards, there was an increase in anxiolytic drugs (+ 12%), especially in the regions of central Italy, Marche (+ 68%) and Umbria (+ 73%). And during the so-called phase 2 of the epidemic, the purchase of these drugs increased to a greater extent than the increase already observed during the first phase. These are some of the data that emerge from the Monitoring of the Italian Medicines Agency on the use of drugs during the Covid-19 epidemic (regional details and an update to the first 2 months of 2021 have been published).

10.08 am – Intensive care doctors in Germany: Go back to the lockdown
Intensive care doctors in Germany are calling for a return to lockdown immediately. In light of the contagion data, which show an increase in Covid infections and the spread of the British variant, we strongly advocate a return to the lockdown to avoid a strong third wave of the pandemic.

9.50 am – The first drive through transformed into a vaccine center starts in Milan: up to 2000 doses per day
The activity of the first drive-through in via Novara, transformed into a vaccine center, begins in Milan. Two lines have been converted from rapid swabs to Covid vaccination, while the other 6 for the moment will continue to be used for screening with molecular swabs. The system can perform up to two thousand vaccinations every day in nine hours. The administrations to citizens are open from 8.30 to 17.30. From acceptance to administration, the calculated times are 5 minutes without getting out of the car, to which another 15 minutes are added for waiting inside the parking lot in case of any adverse reactions. Today calls are also being made in the region for chronically ill and frail patients.

9.49 am – Cartabellotta (Gimbe): Because the Rt index is not very effective. Reassure about Astrazeneca
The rt index is not a very effective parameter for assessing the progress of the pandemic, primarily because it is calculated only on subjects with symptoms and 7-14 days late. Commissioner Figliuolo’s plan is good, but it does not include the problems associated with delivering vaccines and the refusal of a part of the population to get vaccinated. Astrazeneca? The population must be reassured, we must trust the institutions, not the headlines, otherwise the vaccination campaign goes haywire. In summary, the speech by Nino Cartabellotta, president of the Gimbe Foundation, on the program L’Italia s’ awakens on Radio Cusano Campus.

9.45 am – Liguria, 15% of health workers refused the vaccine
The number of healthcare workers in Liguria who refused the vaccine is around 15%. The figure was provided this morning by the President of the Liguria Region Giovanni Toti during his speech at Radio Capital. They are not few if you think that they work in contact with fragile patients, he commented on the possibility of a regional law that makes the vaccine mandatory for this category. Or, Toti points out, there is the possibility of not using them in certain roles without this triggering discrimination in the workplace.

9.07 am – Locatelli: The fire at the door of the ISS an outrageously intimidating act
Franco Locatelli, president of the Higher Council of Health, spoke on the case of the door of the Higher Institute of Health set on fire in Rome during the night: an outrageously intimidating act, not only to be condemned but clearly unacceptable. Those who work at the Istituto Superiore di Sanit try to offer a service to the country to try to make Italy manage a problem that has affected the whole world. Maximum of solidarity.

8.57 – Toti: With unvaccinated professors, disparities are created on pupils
I believe that the vaccine is a moral obligation that must be introduced legally. We do not have a homologated vaccine for children under eighteen. If there was a no-vax teacher in one school class, would it be a fair treatment if there was a vaccinated teacher in the next class and not in the other? The president of the Liguria Region Giovanni Toti this morning at Radio Capital.

8.43 am – Thailand resumes AstraZeneca vaccine administration
Thailand will resume the administration of the vaccine produced by AstraZeneca and the University of Oxford from tomorrow, interrupted on Friday after the decision of some European countries to suspend the doses. The first to receive the vaccine will be Thai Prime Minister Prayut Chan-o-cha and his government ministers

8.25 am – The cellist Yo-Yo Ma enchants with Bach while waiting for the vaccine
Yo-Yo Ma, a world-renowned cellist, received the second dose of Covid vaccine on Saturday and celebrated with an impromptu performance in the waiting room of Berkshire Community College, Massachusetts, to the delight of those who, like he was waiting his turn for the injection. The American musician, born in Paris of Chinese parents, was immortalized by his improvised audience while performing pieces by Bach and Schubert. The videos of the performance, which lasted about 15 minutes, immediately went viral online and on social networks.

8.23 am – Caltanissetta, the mayor asks for the red zone
Schools closed in Caltanissetta, starting from today and until the end of March 20. An order signed by the mayor Roberto Gambino provides for this, in light of the sudden increase in the Coronavirus epidemic. A worrying situation that pushes the mayor, with the same provision, to ask the Presidency of the Region for the establishment of the red zone. Currently, Sicily in the orange zone.