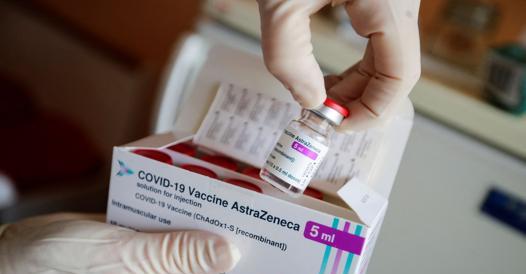 Covid cases worldwide exceed 120 million according to data released by Johns Hopkins University, while confirmed deaths exceed 2.6 million since the start of the pandemic. And in Italy the latest toll, relative to Monday 15 March, of 15,267 new cases and 354 deaths (here the bulletin with the data and here all the bulletins showing the situation since the beginning of the pandemic: here those of 2021, here those of 2020). Here is the map of the contagion.

2.18 pm – Ema: the evaluation on the AstraZeneca vaccine will arrive on Thursday, we ensure transparency. The investigation of specific batches
Emer Cooke, executive director of the European Medicines Agency (Ema), during a press conference clarified the reasons that led to the suspension of the AstraZeneca vaccine. Thousands of people have developed blood clots, we have to establish if there is a correlation with the vaccine – said Cooke -, we have decided to suspend the administration to understand if only a coincidence or there is a correlation. Adding that the evaluation will arrive on Thursday. Our priority is to ensure the safety of the vaccine. At present, there is no scientific evidence that the vaccine caused thrombosis. The investigation is taking place on specific batches.

14.08 – Astrazeneca vaccine, the dead teacher had a heart attack, no obvious link with the vaccine
No thrombus, but a heart attack. This may have been the cause of the death of Sandro Tognatti, the 57-year-old teacher from Cossato (Biella), who died 14 hours after the AstraZeneca vaccine was injected. No macroscopic cause was found during the autopsy to link death to vaccination. (Here the article).

13.50 – Modern vaccine in under 12, phase 2-3 test at the start
Moderna begins phase 2-3 trial of its Covid vaccine on children under 12. The American company is expected to enroll 6,750 healthy pediatric participants under the age of 12, it announced in a statement. The study will take place in the United States and Canada and will be conducted in collaboration with the National Institute of Allergy and Infectious Diseases (Niaid). Participants will be followed up for 12 months after the second vaccination.

13.47 – Test phase 3 of Medicago-Gsk plant-based vaccine starts
Medicago, a Canadian biopharmaceutical company, and Britain’s GlaxoSmithKline (Gsk) announce the start of phase 3 clinical trials on Medicago’s plant-based Covid vaccine candidate, in combination with the Gsk pandemic adjuvant. Medicago has received approval from Canadian and US regulatory authorities to proceed with the enrollment of healthy adults in the phase 3 part of the study based on positive intermediate phase 2 results.

1.40 pm – South Tyrol, no second homes until April 6
The owners of a second home in South Tyrol who live in an area currently classified as a red or orange reinforced zone, will not be able to reach the Province of Bolzano until Tuesday 6 April. The South Tyrolean governor Arno Kompatscher specified that it would be difficult to explain to those who cannot leave their municipality the fact that those who live in other regions are allowed to take holidays in a second home. Yesterday a similar decision was taken by the Campania region and the Valle d’Aosta. Here are the faqs on the new law decree on bans and travel.

13.39 – Study: to convince citizens it is better to encourage increased trust than to use fear
Fear doesn’t work. If you want to induce the adoption of virtuous behavior by citizens in contrast to the pandemic, then it is better to ensure that their trust in science and institutions. what emerges from a work conducted by a team of researchers from the Universities of Milan-Bicocca, Chieti and Perugia. The study involved 23 countries from different continents (Europe, North and South America, Asia, Australia). The more they trust in those who govern and in science, the more people will be inclined to adopt useful behaviors to combat the pandemic. In reverse, the fear-effect that could be induced by the diffusion of the numbers relating to infections and deaths seems to play a marginal role.

1pm – Agenas, intensive care occupancy rises to 35%: + 4% in 7 days
The occupancy of ICU beds continues to grow throughout the country: according to the latest monitoring of the Agenas (National Agency for Regional Health Services) updated on March 15, now stands at 35%, marking an increase of 4% compared to March 9, when the critical threshold of 30% was exceeded, reaching 31%. The occupancy of the beds in the non-critical area wards of pulmonology, infectious diseases and general medicine is close to the critical threshold of 40%: at a national level of 39%, recording a growth of 4% compared to 9 March.

12.47 – Rasi (Ex Ema): Stop AstraZeneca, the result of emotion. The risk-benefit ratio is not in question
There is a big emotional component behind the suspension of the anti-Covid vaccination with AstraZeneca serum, according to Guido Rasi, former executive director of the European drug agency Ema, host of Sky Tg24: The numbers are very reassuring. The cases in Germany, all somewhat alike, have been interpreted by some as a signal. But let’s look at the numbers: 1,800,000 Germans vaccinated with AstraZeneca and 6 episodes of this thrombosis. An episode about every 300,000 vaccinated, which corresponds to a city like Bari. The benefit-risk ratio is not in the least questioned.

11.28 – Denmark warns AstraZeneca vaccinated on symptoms to watch out for
The Medicines Agency of Denmark, one of the first European countries to suspend the administration of AstraZeneca, yesterday sent a letter to all people who have received this vaccine in the past 14 days to raise awareness of what they might be the alarming symptoms of side effects. In particular, vaccinated persons are invited to contact their doctor in case of bleeding of the skin or mucous membranes. If you have bruises, except where the injection was given, or small red spots on the skin or excessive bleeding. On the other hand, the Danish agency points out, it is normal to experience pain or redness at the injection site, fatigue, headache, muscle and joint pain, chills and fever.

12.10 pm – Von der Leyen, another 3.9 billion SURE loans to Italy
Happy to announce that today Italy has received almost € 3.9 billion in additional loans under SURE, the EU instrument that protects jobs and businesses during the pandemic. Italy will receive a total of € 27.4 billion with SURE. Europe with you. EU Commission President Ursula von der Leyen announces new loans to Italy on Twitter

11.56 – Galli: the suspension of AstraZeneca could have been avoided
Sometimes the troubles seem to be caused by Europe itself. The domino effect of the suspensions implemented yesterday could be evaluated differently, these decisions could have been avoided this is my opinion but I am afraid of the consequences: Massimo Galli, professor of Infectious Disease at the Milan State University and head of the Sacco hospital, during the event Talk Sanit.
The deepening: How much the vaccination plan slows down after the stop at Astrazeneca.

11.31 – Hope: It is right to work for the tranquility of the health workers who vaccinate
Doctors are asking to act on the issue of the legal responsibility of those who carry out the anti-Covid vaccination in case there were any problems. For the Minister of Health Roberto Speranza (spoke on Sanit Talk, online event of RCS Academy) this is a fair, legitimate, understandable request that we must try to accept as soon as possible, guaranteeing a form of protection for them. Mariastella Gelmini, minister for regional affairs and autonomies, also shares the same opinion.

11.07 – Rezza: after Easter we will begin to breathe
We had a setback but we hope to have 3 vaccines available again. We also hope that, with an acceleration of immunizations and closures, after Easter it will begin to breathe : we have seen that where the regions were closed with red zones then the situation improved rapidly. The Director General of Prevention of the Ministry of Health, Gianni Rezza in his speech during the online event Talk Sanit takes stock of the pandemic. Nobody likes to take such heavy measures, but they are due because we absolutely must preserve public health

10.42 am – Hope: Up to 80 million doses in the third quarter, strong acceleration
In the second quarter we expect over 50 million doses, of which 7.3 million Johnson & Johnson is a single dose, and in the third quarter we expect up to 80 million doses, so there is a strong acceleration that we must then translate into capacity. logistics of administering vaccines on the territory. The Minister of Health, Roberto Speranza, during the event Online Talk Health – Strategies for System Reform and Conquering the Pandemic, explains the numbers and strategies of the vaccination plan in place: We are working on a regulation that will also allow nurses to contribute to the vaccination campaign, and also to pharmacies. We are organizing an articulated network

10.32 – Vestager (EU): On all Covid communications, the EU Commission could have been clearer
The EU Commission has not been able to clearly communicate some issues relating to vaccines against Covid-19. The European Commissioner for the Digital Agenda, Margrethe Vestager a Rainews acknowledges the Commission’s mistakes on the pandemic. We didn’t understand how long this pandemic would be, we didn’t understand that there would be three waves. Of course we didn’t have a two-year perspective on what we were doing and then maybe the communication, maybe it should have been clearer. For a long time people thought that we had signed a contract long before the British and instead we did it just a day before. We should have been clearer.

9.21 am – Galli: the stop to vaccinations does more damage than the vaccinations themselves
In my opinion, the stop will do much more damage than vaccinations ever did, which will eventually be released unless there is something we just don’t know, haven’t seen or been told. Massimo Galli, infectious disease specialist at the Sacco hospital and at the State University of Milan, reiterates ad Open, on Rai3, his trust in vaccines, the only way out of the emergency, and recalls a precedent of 2014, when a flu batch was withdrawn, the Fluad: The result was that the 3 deaths somehow attributed to that vaccine turned out to be absolutely independent from the vaccine itself, for the number of vaccinated drastically, by 6 percentage points From 54% of vaccinated over 65 to 48%. Probably with a few hundred more deaths, those s.

Caste, Gender Inequality in the Internet World – What Does the Digital Inequality Study Say?
Posted onDecember 6, 2022

In China, students demonstrate against the confinement of their university
Posted onDecember 6, 2022

Film collector Bromberg in court: “I have become a victim of my passions”
Posted onDecember 6, 2022

Castres asks to reschedule the shock against Exeter, in competition with France-England, the EPCR refuses
Posted onDecember 6, 2022
Menu