Covid in Great Britain, why are infections so high? – time.news 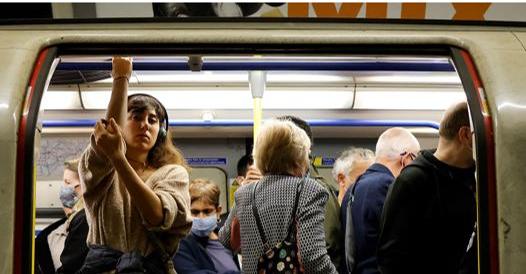 Today in Great Britain there were 223 deaths, 43 thousand infections: but for days in the United Kingdom the new cases of people who tested positive for the Sars-CoV-2 coronavirus have exceeded 40 thousand. Why?

For days, the Great Britain
records levels of new infected with Sars-CoV-2 significantly higher than last year – when parts of the country were in lockdown – and enormously higher than those of other Western European countries, sinceItaly at the France, at the Germany.

It is true that, thanks to vaccines, the number of serious cases of Covid registered in the country remains limited, and that the percentage of occupancy of hospital beds by Covid patients is significantly lower than last year, both in intensive care and in non-intensive wards.

But it is also true that the higher the circulation of the virus, the higher the chances that the virus infects vulnerable people, increase the pressure on the health system, or develop new variants
, potentially even more dangerous than the currently dominant Delta.

In the past few hours, the government of Boris Johnson has predicted that the next few months will be challenging, he assured that the focus on cases on the maximum increase, but he also has for now refused to field plan B. which the premier himself had spoken about last month – which would entail the reintroduction of restrictive measures such as mandatory indoor masks, or various forms of green pass obligation to access certain events. The government said Johnson spokesman Max Blain, he wants to try to protect both lives and the quality of lives.

Ma because cases are rising in Britain?

The main reasons could be these.

The obligation to wear the mask outdoors, in Great Britain, there has never been. That of wearing it inside hasn’t been around for months. Basically, as indicated by the correspondent Luigi Ippolito, the masks have become a memory everywhere, and now only on the subway can they still be seen. Even if it is impossible to correlate the use of the mask, alone, to higher numbers of infections (in Sweden and in Netherlands the percentage of people who say they have never worn a mask, according to a research by Imperial College London, is lower than in Great Britain, but in both countries the infections are much lower than in the United Kingdom), certain that the mask among the decisive measures for the control of infections
.

2. The distancing
Britain canceled social distancing obligations much earlier than other European countries. In Italy, for example, the reopening of discos was the subject of debate for months after English clubs reopened at full capacity. In Great Britain there is no obligation to have a green pass to access public places or workplaces. The percentage of workers who have resumed going to the workplace remains low at the moment – about 50%, according to the BBC – but every opportunity for socializing is currently possible. As Luigi Ippolito pointed out again here: After the government abolished all restrictions in July, London has been breathing in the air of full normality since September: last week the congress of conservatives was held in Manchester, a Dantesque bedlam that saw thousands of people flocking to crowded events and sweaty parties (and the only visible mask was the one the French ambassador wore); these days in the capital in corso Frieze, the greatest artistic event of the year, which has returned to its usual splendor with the shuffle from one gallery to another; the embassies have taken over or host cocktail ambits and the trendiest clubs in the capital are preparing to set up phantasmagoric Halloween parties where social distancing will be measurable in tenths of a millimeter.

3. Immunity and vaccination schedule
Great Britain was among the nations that first massively carried out the population vaccination program. The vaccination campaign has for slowed his pace enormously – not surprisingly, Great Britain is no longer in the top 10 of the countries with the highest percentage of the population vaccinated in the world. And paradoxically, the initial advantage could be one of the contributing causes of the current increase in infections, because studies have indicated that coverage against coronavirus infection drops significantly starting from the sixth month after the second dose. This data is then more critical for those who have received vaccines with different technologies than mRna – like AstraZeneca, used extensively in Great Britain. For this reason, the government has activated a program for the distribution of the third dose of the vaccine – on the basis of what has been done (with excellent results) in another early adopter of anti-Covid vaccines, Israel. Yet, according to experts, it proceeds too slowly: the pace of about 180 thousand third doses per day. And more than half of the people who could get one haven’t done so yet.
Britain also vaccinated young people in the 12 to 17 age group more slowly (the percentage of Italians in this age group who received at least twice the dose of the vaccine compared to the British).

Scholars are also trying to monitor how much variant AY.4.2 or Delta Plus
– increasing in Great Britain – may be linked to the increase in cases. At present, 6% of cases in Great Britain linked to this new variant. From what is known at the moment, however, this variant – which has not yet been cataloged among the most dangerous, and was sequenced in July – does not appear to be significantly more contagious or dangerous.