“Covid, infection down after Easter thanks to the new rules” – time.news 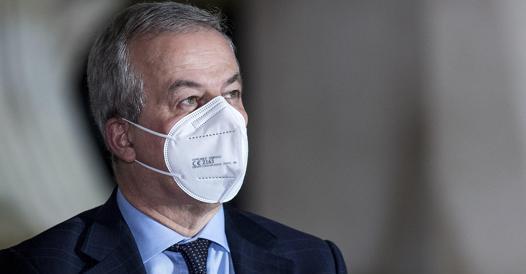 Professor Franco Locatelli, can we still trust vaccines and, in particular, that of AstraZeneca?
«As president of the Higher Health Council, I have no hesitation in saying that it is essential to proceed with all the necessary investigations. In a country as well developed as ours, when reports of serious or fatal accidents arrive, all measures must be taken to understand the causes. The precautionary withdrawal of the batch to which the administered dose belonged demonstrates the efficiency of the pharmacovigilance system “.

Why all these “accidents”?
«With equal clarity and firmness, it must be said that hasty conclusions on the causal link should not be drawn. It must be based on evidence, otherwise you risk emotional reactions. And let’s not forget that the effectiveness of the AstraZeneca vaccine is very high, being over 80% for all the manifestations of Covid-19 and approaching 100% for coverage of severe forms “.

So shouldn’t we refuse this vaccine?
«No doubt to answer no, we must not refuse it. Millions of people in Europe have received it without developing problems and this data reassures on the safety profile, as well as on that of the others available today. The AstraZeneca vaccine will help protect us from the epidemic ».

Is the English variant that has taken over the only cause of the resurgence of the epidemic?
«The greater contagious capacity of the English variant, now largely predominant on the national territory, is beyond question and has played a decisive role in supporting the resumption of the epidemic curve. Let us never forget, however, that individual behaviors also contribute and, despite having vaccines available today, we must not in the least deflect from everything we have learned in recent months. The coverage offered by vaccines will not translate into a total change in a few weeks: it will be a progressive process that will be completed only in a few months “.

Was the new phase of strong expansion of the epidemic expected in this “acute” form?
“There was certainly the fear linked to the spread of variants characterized by greater contagious power, and the constant analysis of the evolution of the epidemiological curve has exactly the purpose of intercepting predictive changes of impact on health services, such as, for example, employment of beds in intensive care. In this logic, the criterion of the cumulative incidence at 7 days of more than 250 cases per 100,000 inhabitants was valued as an additional parameter useful for identifying in a more timely manner all the territorial contexts characterized by greater viral circulation “.

Can the three-week shutdown, if not accompanied by a burst vaccination campaign, be effective?
«Following the principle of maximum caution, it was decided to raise the level of measures, in the logic of containing the spread of the virus, so as to find ourselves in a more favorable epidemiological situation after Easter. In the first place there is the protection of health, but it is clear that there is also an economic and social crisis that should not be underestimated. This is why I remain convinced of the usefulness of the principle of proportionality and the adequacy of the interventions ».

Why is Sardinia the only region in white?
«It is a model to be exploited, it demonstrates how it is possible to fall below the threshold of 50 cases per 100 thousand inhabitants, considered critical for guaranteeing the tracking of positives. It is possible that the region has been facilitated by a more manageable situation compared to other areas of the country, where the population density and also working contacts are higher. Other factors, including testing and screening policies, have contributed, marrying the virtuous behavior of the Sardinians ».