De Luca’s desire for A: «I’m aiming to reach the top and now I’ll try with Chievo» – Sport 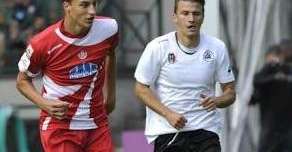 Bolzano. Among the various South Tyrolean players who play in Serie B, waiting for a desirable arrival among the cadets of FC Alto Adige, the 22-year-old Chievo center forward Manuel De Luca represents the spearhead. Born in Bolzano, but raised between Trodena and Laives before returning to the capital at the age of 8, Manuel began playing seriously at Fc Alto Adige before being called up by two prestigious youth sectors such as those of Inter and Turin. It didn’t last long with the Nerazzurri while the grenade club sent him to mature at Renate, Alessandria and Virtus Entella before finally selling him to Chievo with whom De Luca is now trying to reach Serie A.

Hi Manuel. The identity card says that you were born in Bolzano but the surname De Luca betrays a non-South Tyrolean origin. Quite right?

Exactly. My father Costantino is from Puglia from Brindisi while my mother Edith is from South Tyrol with a German mother tongue so I am perfectly bilingual. They met in Florence when mom was studying at university and then dad was dragged to South Tyrol.

You lived in the region until you were 14 but where exactly did you grow up?

From birth until the age of eight we lived first in Trodena and then in Laives. Later we moved to Bolzano but I didn’t enjoy the city a little because football soon took me elsewhere. However, I managed to enroll in accounting at Talvera and then I graduated in Turin when I was playing in the youth sector of the grenade.

In the De Luca home, how important was football when you were a child?

We are all avid fans and we follow him with great passion. For my part, I fell in love with it watching the matches of my sister Denise, six years older, when she played in the women’s Fc Alto Adige.

Like so many local kids you started at Fc Alto Adige. What memories do you have of that experience?

From Voran Laives I moved on to the Giovanissimi of FC Alto Adige and there everything seemed wonderful to me. Tactically, then there was the turning point because from midfielder they transformed me into a striker, effectively changing my career and life.

You can describe yourself technically. Which player are you inspired by?

I am a central striker who tries to use a certain physicality to help the team. I think I’m a generous player who “feels” the goal enough but I absolutely have to improve in handling the ball. As an idol I have no doubts: Zlatan Ibrahimovic.

Were you hoping to stay longer in Inter’s youth sector?

With FC Alto Adige we played in a national championship for which I was able to show off and Inter borrowed me by beating fierce competition. Unfortunately, at the end of the season the two clubs did not agree on the price of my card and consequently I temporarily had to return to South Tyrol.

What has been called up to the National Under 16 team for you?

As for everyone, wearing the blue shirt represents an indescribable pride because in that moment you understand that you represent an entire nation. We hope to try certain emotions again in the future.

And the 3 years in the youth of Turin?

First of all it was a growth on the human side also because I was rather mammone and Turin is far from Bolzano. I played in all the youth categories but I remember with pleasure especially when I was training with the first team because I could share the locker room with players I had only seen on television before.

Are you referring to someone in particular?

Given the role I followed Andrea Belotti closely and I was amazed by his humility on and off the pitch. I liked Del Gallo’s availability with us guys and his tenacious determination in wanting to score.

Was the highlight of the debut in the Italian Cup against Juve in January 2018?

On that very cold evening Belotti was absent and when twenty minutes from the end Nyang asked for the change, Mr. Sinisa Mihajlovic immediately ordered me to enter. I confess that I didn’t even have time to get excited so much I was focused on what I had to do.

Torino sends you to make the bones in Serie C first to Renate and then to Alessandria. Two conflicting adventures in retrospect?

I arrived at Renate in the middle of the season in an already consolidated team situation for which I have not recorded at all. In Alessandria, on the other hand, thanks above all to mister Gaetano D’Agostino, I managed to express myself at my best, reaching double figures in terms of goals scored. In any case, two experiences that have helped me a lot.

With Virtus Entella you land in Serie B. How did it go in Liguria and what differences did you notice between the two categories?

Unfortunately I had groin pain that negatively affected my year in Chiavari so much that I was only able to play eighteen games. Going up in the category I immediately noticed that everything improved starting with the stadiums and related pitches to conclude with the level of teams and players.

Now you are definitely a Chievo player. What does it mean at this pivotal moment in your career?

I can’t deny having a 4-year contract with a solid club like Chievo gives me some peace of mind. Being constantly on loan lets you know new places and people but certainly does not help to nourish the sense of belonging.

Now it is easier for me to go back to Bolzano and it is easier for my parents to follow me given the proximity to Verona. Unfortunately, everything is conditioned by the Covid emergency, but we hope soon to move more easily and without too many restrictions between different regions.

Is the seasonal goal to return to Serie A? What do you personally ask of your career?

The recent history of Chievo and the current position in the classification “force” us to try to make the leap in the category but we will have to keep our feet firmly planted on the ground also because the championship is very competitive. As far as I’m concerned, I always try to improve and I don’t hide the fact that the ambition is to get as high as possible. Now I’d like to play in Serie A and much better if I succeed with Chievo.

For a year, Covid has been played behind closed doors. How much does this new sad situation affect you as a player?

The reaction to this new situation is subjective even if unfortunately we are slowly getting used to it after a year of empty stadiums. Personally I like the warm atmosphere that only the public can give but I also believe that this contingent situation is even more stimulating for a player.

Your peers, not just footballers, have grown up on social media. How do you deal with this new way of communicating?

Like most of my peers, I use Instagram and Facebook but I prefer to post only football-related things without being too personal. I understand that social media are the communication of the future but you must always use them wisely otherwise they can become a boomerang.

How are we sentimentally and how many tattoos do you have?

Unlike many other players, I don’t have any tattoos to show. For the rest, if you want to know, I’m still single …

What did you leave behind in Bolzano and what relationship do you maintain with your places of origin?

As I said before, living in Verona now allows me to return to my parents in Bolzano on a weekly basis and therefore I always gladly return to our areas. In South Tyrol there is also my best friend Fabian Menghin, whom I have always known and with whom I have a special relationship. When I return, we see each other regularly.