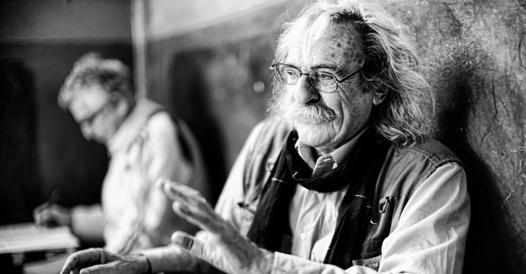 A protagonist of the American counterculture, close to the Beat authors, passed away at the age of 87 in San Francisco

The last Beat left exactly as he would have liked: working on his poems, between an impromptu reading at the Caff Trieste in San Francisco and an intervention at a meeting – via Zoom, due to pandemic – for a collective of poets.

Jack Hirschman, who passed away on August 22 at the age of 87, irregular voice and character even for the not exactly petty bourgeois parameters of the Beat Generation, he had fallen in love with poetry as a boy, inevitably mesmerized by Allen Ginsberg – theI scream who seized me by the very private parts, he wrote years later – and devoted his life to poetry with zeal. Nineteen years old, he had written a fan letter to Ernest Hemingway asking him for advice and that great one had replied with words that have become famous; You’re better than me at your age but I can’t help you, try not to write in my style. Young Jack obeyed. He became a poet who threw words on paper as Jackson Pollock, his other hero, did with color; He teaches in important universities such as Dartmouth and Ucla (he also had a certain Jim Morrison among the students at Ucla), and because of his political commitment he left teaching during the Vietnam war which obviously he could not stand (from the chair, he openly invited the boys to evade the lever).

Born in New York from a very communist Jewish family, remained faithful to the line until the end, finding refuge in San Francisco at Lawrence Ferlinghetti’s City Lights and in the thousand streams of poetic contestation, however always a bit wary not so much fromethos Beat as much as by what he saw as bourgeois failings (Zen mysticism, Ginsberg’s genius for self-promotion), unacceptable to him – in fact – very faithful to the line.

Hat, mustache, red prescription shirt, he was always generous with very serious but also affectionate advice for anyone who approached him, a student or a simple reader, in any case a companion on the road and in adventure and a love for books. He was an excellent and abundant translator (from Paul Celan to Pier Paolo Pasolini to an important Antonin Artaud), and the only thing he loved more than poetry was his commitment to the poor, the homeless, immigrants (preferably irregular), dazibao the sixties to the small radio seventies, hard and pure in the years of Reaganism, crossing the geological eras of post-war American history always keeping the arrow to the left.

His Rimbaud illuminations he called them Arcana
(published in Italy, always in bilingual books, deservedly by Multimedia), and listening to him while he read them was a party. Charles Bukowski wrote that great poets die in pits of m … smoking, fame is not for them, but Hirschman knew that, with money, the least important thing of all.