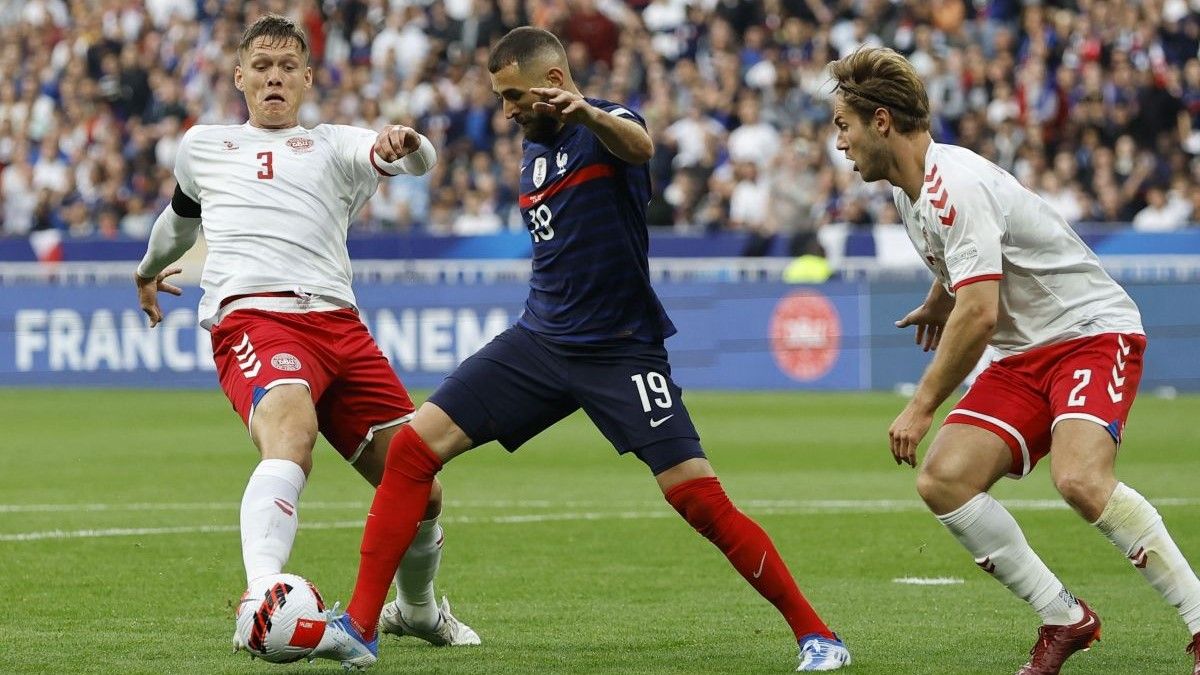 the inspiration of Karim Benzemareflected with a great goal, was diluted by the France’s unexpected loss to Denmark (1-2) in a day of the League of Nations that was completed with other surprises such as the Netherlands victories in Belgium (1-4) and from Austria in Croatia (0-3).

The stars returned to the Stade de France just as they did six days ago, in the Champions League final. It is the fief of World Champion It entered the scene with all its brilliance. Kylian Mbappe, Karim Benzema, Antoine Griezmann, Jules Koundé in his starting eleven. Also Aurélien Tchouameni, a great incentive for the market.

All the potential in the field and ended up in question against Denmark, again with Christian Eriksen as captain and with the athletic Daniel Wass in his starting team.

The duel unbalanced him Benzema’s great goal at the beginning of the second part. He completed an individual action behind a wall with Christophe Nkunku who replaced Mbappé in the intermission, injured in the final stretch of the first half. He also left in annoyance Early In the second half.

🇩🇰 Starting off their #NationsLeague campaign with a win against the defending champions 💪 pic.twitter.com/2kesDRTfzZ

France hinted at shortcomings and, above all, lack of ability to assemble so many great players. He was in evidence against a more organized rival who achieved the tie in minute 68 with a goal from Andreas Cornelius, Trabzonspor striker and protagonist of the final stretch. The Turk also signed the victory of his team two minutes from the end.

Half an hour from Modric

It is the surprising Austria that leads this Group 1 of the first division of the competition. Without David Alaba In his eleven, the debut of Ralf Rangnick, former Manchester United coach, could not have been better.

🇦🇹 Marcel Sabitzer on the scoresheet for Austria ⚽️#NationsLeague pic.twitter.com/MazBOMKuxB

The Central European team, which will not be in Qatar 2022, took the Gradski VRT stadium in Osijek and thrashed the world runner-up who did not count on the Real Madrid midfielder until the last half hour Luka Modric nor with the Osasuna striker Ante Budimir.

By that time the game was already sentenced (0-3) with the goals of the Bologna striker Marko Arantuvoc on the brink of rest, from the Augsburg attacker Michael Gregoritsch and the Bayern Munich player Marcel Sabitzer.

It was a hard setback for the group of Zlatko Dalic similar to that of Belgium, blushing at the King Baudouin stadium against the Netherlands (1-4).

Memphis Depay, with a double, he led the victory of the group of Louis van Gaal, with Frenkie De Jong as the team’s beacon. The Inter player Denzel Dumfries y Steven Bergwijn They rounded off the first success of the Oranje team in the League of Nations.

Belgium, with Eden Hazard in the first half and sin Thibaut Courtoisonly scored in added time through Michy Batshuayi to make up the score.