Despite a low growth rate, the Israeli economy is growing while increasing its growth potential

Although the growth rate of the Israeli economy in the third quarter was relatively low, most components reflect that it continues to grow at a rapid pace while increasing its growth potential. Growth in 2021 is expected to total 6.2%.

The low price index for October does not, in our opinion, reflect a decline in the inflation environment.

Short- and medium-term shekel bond yields do not reflect a reasonable chance of a rise in interest rates.

According to various indications, the recent move of strengthening the shekel has caused urgent sales of Israeli forex holders.

Imposition of closures and restrictions in Europe may return the European economy to negative growth, but will not necessarily lead to significant weakness in the European stock market.

Data in the US economy continue to indicate an acceleration in growth.

The Israeli economy continues to grow at a rapid pace

GDP in Israel rose by only 2.4% in the third quarter. However, the main components grew at a high rate. Exports rose by 7.5% and investments by 14.8%. Private consumption, which grew at a low rate of 0.7%, was mainly affected by the decline in consumption of durable goods. Food and apparel after very high growth in the first half of the year.

Overall, GDP in the economy has not yet returned to the pre-crisis trend line (Chart 1). It is expected to close the gap in the coming year, which did not happen after the crises that have occurred in recent decades.

Private consumption is still about 6% behind the pre-crisis trend (Figure 2), with consumption of sustainable construction products being much higher than the trend, despite the decline in the third quarter (Figure 3). In contrast, consumption of services is still about 20% lower than the trend and even far from the level on the eve of the crisis, despite an annual increase of 18.4% in the third quarter, after growth of 47.1% in the second quarter (Chart 4).

The most prominent expression of the recovery and optimism of the business sector is reflected in the rapid growth in investments, with the exception of investments in vehicles (Figure 5). In recent quarters, investment in construction has accelerated, particularly in residential construction. Since the outbreak of the plague, there has been a real jump in investments in information and communication equipment, in parallel with the continued rapid growth in intellectual property (Figure 6). Investments in these areas are expected to lead to improved productivity and growth.

The Bottom Line: The economy continues to grow at a rapid pace. Growth relies on a variety of areas, including private consumption, investment and exports. The growth rate this year is expected to be about 6.2%.

Have the chances of an interest rate rise in Israel decreased?

It is difficult to argue with the market, but in our opinion its reaction after the publication of the price index was excessive, including the sharp decline in forecasts for rising interest rates and inflation:

The price index for October was not supposed to significantly change the forecast going forward. A single item of travel abroad diverted the index down by 0.3%. In addition, the rate of inflation in most other items continued to rise (Figure 8).

The average weight of the items in the index whose prices have risen in the last six months has been significantly higher than in any of the years since the beginning of the previous decade (Figure 7). This fact illustrates that price increases do not focus on individual items, but are spread over many products and services.

According to the Bank of Israel publication, the consensus of forecasters ‘inflation forecasts, the inflation expectations embodied in the banks’ interest rate contracts and their internal interest rates were higher after the October index was published than in the previous month, illustrating that the latest index did not change estimates.

As reported last Friday, the German producer price index rose from 14.2% in September to 18.4% in October, well above forecasts. Figure 9 shows the close relationship over the past two decades between the price index for manufacturers in Germany and the price index without housing in Israel.

The labor market continues to improve rapidly, with a decrease in the unemployment rate and an increase in the number of job vacancies (Figure 10).

The rate of increase in apartment prices is skyrocketing. Credit to real estate-related areas is rising rapidly, with mortgage rates almost at an all-time low (Chart 11).

The Fed may anticipate a rise in interest rates against the backdrop of skyrocketing inflation in the U.S. At least three Fed governors, including the deputy chairman, did not rule out a faster-than-planned reduction in bond purchases last week and an early rise in interest rates. It will also be easier for the Bank of Israel to raise interest rates in the coming year if necessary.

The Bottom Line: In our estimation, the inflation environment will continue to rise, which is expected to cause the Bank of Israel to raise interest rates. In light of this assessment, current inflation expectations justify a bias in the linked channel. Also, the yields of shekel bonds in the short-to-medium part of the curve are too low in relation to their risk. 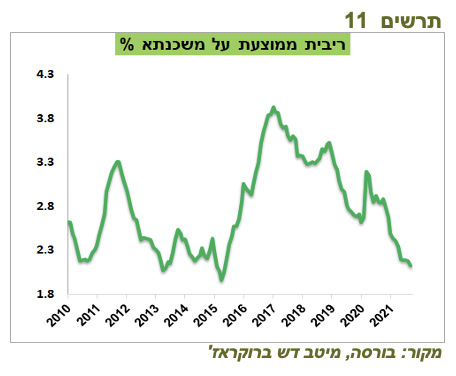 Not only is the behavior in the bond market not entirely in line with the publication of the price index, but also of the shekel. In the opinion of the bond market, the latest index effectively eliminates the chance of a rise in interest rates in Israel, the shekel was actually supposed to weaken. Apparently, the strengthening of the shekel this time did not happen against the background of a change in interest rate expectations.

A week ago, we showed that the main reason for the shekel’s behavior in recent years was hedging transactions by institutional investors. Nevertheless, it seems that another dominant factor was involved in the recent strengthening.

Both facts can hint at this:

The strengthening of the shekel occurred against the background of the increase in the trading volumes of domestic investors, when the turnover of foreigners actually decreased (Chart 13).

The Bottom Line: It is possible that most of the recent strengthening of the shekel was not due to hedging transactions, but due to urgent conversions of Israeli foreign exchange holders in light of the rapid fall in the exchange rate and the break of historical record levels.

Europe has entered a new wave. What are the possible consequences?

Some European countries have again entered restrictions and closures at various levels due to morbidity:

Previous waves of illness have caused the European economy to slide into negative growth.

READ Also:  OPEC will not stop oil prices from skyrocketing

The euro weakened rapidly against the background of the decline in the yield gap between the US and Europe, which reflects expectations of changes in interest rates (Chart 16). We are not sure that this will continue over time. A much faster rise than other countries in the producer price index, the abnormal rise in energy prices and the weakening of the euro, and the ECB will probably have to curb its policy in the coming year, which may lead to a reversal of the trend in the European currency. 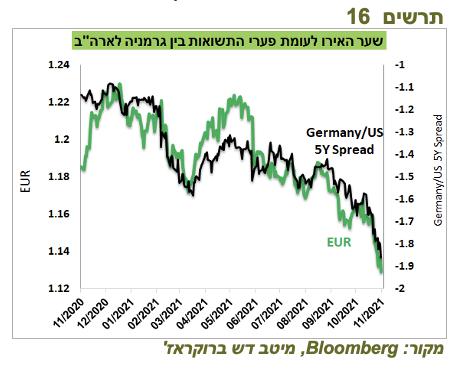 In periods of euro weakening in recent years the European stock market has achieved a similar return to MSCI World. In contrast, as the euro strengthened, European stock performance was relatively inferior to the global stock index (Chart 17).

Since mid-2020, the Consumer Cyclical, Utilities, Materials and Financial sectors have achieved excess performance during periods of rising morbidity in Europe. In contrast, based on past experience it is now worthwhile to move away from shares of health services, current consumption and technology (Figure 18).

Growth in the US economy is accelerating

U.S. economic data reflects an acceleration in growth in the fourth quarter. The Lead Indicators Index rose sharply in October (Chart 19). Retail sales continue to reflect strong demand for products, although it is unclear what effect price increases will have on them (Chart 20).

The various indicators show that pressure for rising prices in the US economy continues to increase. In last November’s Fed branch surveys, the component that reflects the price level continued to rise. At the same time, the components that reflect delivery times are also at very high levels, indicating continued supply chain problems (Figure 22). At the same time, the strong rise in the industrial production index in October may signal an increase in supply and expected disruption.

In the US, too, there has been an increase in the number of patients in many countries. Unlike in Europe, the experience of the epidemic on the stock market in the past year clearly illustrates that there are only two sectors whose performance relative to the stock index was clearly affected by a number of patients. Compared to inferior performance of energy stocks (Figure 21).

After the murder: Dozens of residents of Gadida Makr tried to enter the hospital in Nahariya by force, two security guards were lightly injured – Ynet

Tecnimont and the three contracts with Abu Dhabi...

Fitch promoted the accounts of Italy

Properties and Building sells the HSBC building and...

The daughter of founder Zara has been appointed...

There is a lack of digital experts in...

Who controls the conversion of Hartz IV?