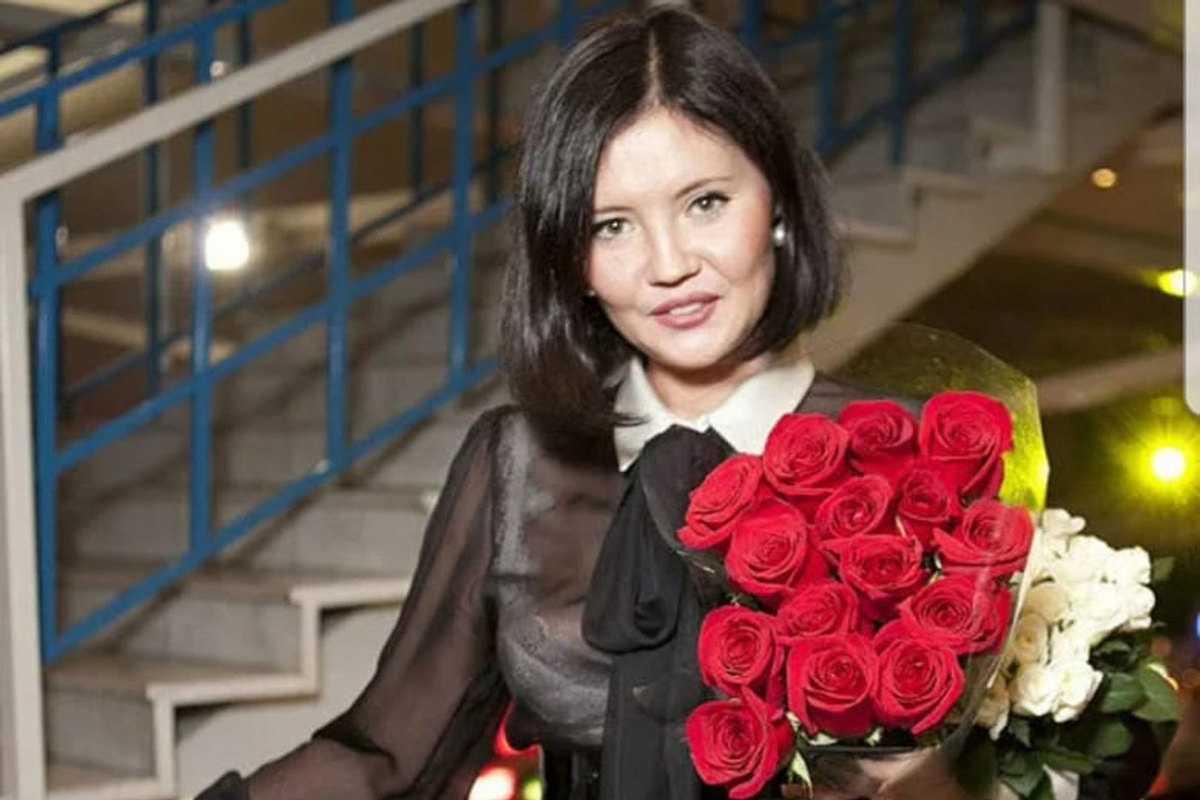 The series “Mistress of the Mountain” of the channel “Russia 1” became for the director Ekaterina Dvigubskaya a return to the genre of mysticism. Fans of chilling stories may remember her project “Your World” about a young shopkeeper in which all sorts of devilry happens, but since then Catherine has filmed mostly melodramas. In “Mistress of the Mountain” there is also an impressive melodramatic line, but to a greater extent, the life and health of the heroes is affected by the curse imposed on precious stones, which, of course, everyone needs.

The reaction of viewers to the new series is traditionally very different. But even those who are in no hurry to give compliments to creators sometimes note an unusual combination of beautiful nature and the feeling that all this beauty can become deadly at any moment. A similar atmosphere was created by David Lynch in his famous TV series “Twin Peaks”. Ekaterina Dvigubskaya and her team, without copying the classic series in any way, managed to come up with a visual world that certainly makes an impression.

In a conversation with MK, the actress and director discussed the ideal nature, work with her mother, the nineties and the female director’s share.

– You have a lot of experience working on melodramas, but in the case of Mistress of the Mountain, you are more likely in the territory of mysticism. Was that what attracted you to the script?

– I did shoot a lot of melodramas and, unlike those who don’t like them, I don’t treat this genre as low. I am a woman and I really like plots with a love background. I also filmed mysticism, but it was quite a long time ago, so I returned to this genre with pleasure. And creating such a strange city like Stone is very interesting. In the course of work, we came up with characters that were not in the script. A strange blissful girl, little people, a woman out of this world with a huge bust and crazy eyes, as if from Fellini’s films, they all give the film a certain atmosphere.

– In Kamenny there is a bit of Twin Peaks in the atmosphere. Can we say that the series by David Lynch was to a certain extent a reference for you?

– Yes, sure. Actually, our main musical theme of the wonderful composer Sergei Dudakov is somewhat reminiscent of the main theme of “Twin Peaks”. And this was done deliberately. We did not copy anything from the famous TV series, but the strangeness of the city of Kamenny is somewhat Lynchian. It’s like a funnel where even those who managed to get out of there return, as happens with one of the main characters, Roman.

– Many have noticed that even the beauty of nature here is somehow alarming. How long have you been looking for nature?

– We did not find the necessary places quickly. We filmed some scenes in Adygea, but the main nature was found in Belarus. We shot on the famous chalk lakes, which are sometimes called the Belarusian Maldives for their turquoise water and white sand. We filmed Kamenny itself in Usyazh. When there are many locations, there is always a risk that the frame will look like an ear from a dog, a tail from a cat, paws from a marten. But in my opinion, we managed to collect a reliable picture.

– As a rule, before agreeing to shoot the stars, they quite meticulously find out all the details of the project. Perhaps it was not easy for you to explain to them that you are going to mix melodrama, different eras and mysticism?

– The casting was really long and long. And I always read the script with the actors. I think this is very correct, and although now the actors sometimes devote very little time to the script, I think that it is much better if they spend at least sixteen hours with him. And so we all sat and read. By the way, this was not easy to organize. Everyone needs to be brought together, that is, to find time in the schedule of stars, to bring them, but we did it, read and pronounced important points. This is the only way to get a deeper understanding of what is happening with the heroes. I really wanted it to be seen on close-ups that some mystical influence was exerted on them and they were all slowly going crazy.

– The main characters in the course of the action age by more than twenty years. In such cases, the same character is sometimes played by different actors. But you apparently decided to torment the stars with a complex make-up …

– Here an interesting move was suggested by Dmitry Vlaskin, who plays Roman. His hero grows up from sixteen to forty years old, we deliberately did not greatly age Dmitry in the frame, he played age with his voice, at some point his hero began to wheeze. And in the end, when his hero is killed, he seems to instantly age. Anna Snatkina was thirty-five at the time of filming, but she leads such a healthy lifestyle that, in my opinion, she looks young. The hero of Sergei Peregudov in the second part of the series is already sixty, so he had to make wrinkles, add gray hair and even put on his stomach.

– The nineties are not the easiest time in terms of showing it on the screen. If the sixties and seventies for many directors are photographs of mothers and grandmothers in beautiful dresses and some kind of romantic memories, then the nineties, which were quite recently, can cause a variety of, including uncomfortable, associations. How was this time for you?

– For me, the nineties were just happy. This is my youth, which people usually remember with joy. It is clear that there were bandits, complete uncertainty, poverty. But the nineties also became a very curious and extraordinary time. One system collapsed, another was created, and in your youth you still cannot understand the globality of these changes, but you are fascinated by their energy. We felt that the Soviet Union was dying, something new, wild, different was being born. When I was preparing for filming, I watched many films of the nineties, including the pictures of Khotinenko and Livnev. And I must say that the films were amazing, no longer Soviet, but also not the dark ones that they began to shoot when the rental completely collapsed. So I love the nineties. This is music and television, which was much more interesting than it is now. In my youth, I watched TV, and now I have two of them, they are diligently dusting them off, and only children watch cartoons. For me, TV as a source of information has long ceased to exist.

– In the series, your mother Natalia Arinbasarova played a rather important role. Is she always ready to participate in your films, or does she need to be persuaded?

– It seems to me that images of every witch suit my mother, but here she plays a woman endowed with a mystical gift. And it was interesting for her to play, so she did not have to beg. At seventy-four years old, my mother is in great shape both as an actress and as a woman. It is very pleasant to look at her. And it’s also comfortable to work with. Mom is from that cohort of great Soviet artists, for whom the profession is sacred. I was very lucky on the set with Anya Snatkina, Dima Vlaskin, Sergei Peregudov – they also take their work responsibly. But I often came across young artists who were completely unknown to anyone, who had completely ridiculous ambitions, despite the lack of talent and the ability to work. The stars of Soviet cinema are incredibly professional and disciplined people and they have great respect for both the director and the entire group. I am never ashamed of my mother. She will not make a cheap scandal, she will not throw lunch, as some young stars sometimes do. And mom also has a kind of depth, which is important for an actress.

– For yourself, you did not find a role in the series …

– We had quite a few shifts for such a series, and when you and the director enter the frame, you slow down the process. I would love to take pictures of myself, because I really like to laugh at myself and I love when good cameramen take pictures of me beautifully. But here I realized that I simply would not stretch everything physically. In addition, there are many excellent actors in Belarus. For a small role there, you can call a national actress from some serious theater and she will gladly take part, because for them this is an earnings. I don’t want to take their bread away at all.

– Recently, women directors have received quite a lot of attention, they even collect special festival programs for films made by women. You found yourself in the director’s chair at a time when this work was considered very masculine. What is your view of a female director?

– This work was called non-feminine, because with expeditions of six months it is not easy to participate in the life of a family. Now, of course, a woman in general is not obliged to give birth, get married, society does not press so much on her in matters of realization as a wife and mother. Still, a director is a very hard job. I now teach directing at an online school and immediately tell my students that if they have at least one percent of doubts about this profession, then it is better not to go into it. During filming, I am like an athlete at the Olympics. Eating, sleeping, exercising, all for the sake of physically having enough strength. And there are tons of creative questions that you need to solve. At the same time, you are alone in a strange city, where you have to live for several months, which, for example, puts a lot of pressure on me. So this job is for fanatics, not for men or women.

– Someone once called me a director, I almost jumped on my chair. It sounds monstrous. Anything, but not the director. I don’t see anything wrong with a female director.

– I myself have always been somewhat feminist. I never thought that a woman is more stupid than a man, that she is obliged to do something there. In modern society, this is all a matter of contract. If you want to earn, earn. There are au pair, or maybe your husband loves to cook. But if a man can no longer open the door to you, then this is already some kind of frenzied attitude. For example, I never pull the bill from men who want to treat me to a cup of coffee or a glass of wine. I like it when my husband gives me flowers, when a man gives me a hand or a coat. Now the men are completely muffled, and they are rare people, it is better to take care of them.