Documenta: The dialogue failed – and that’s a good thing 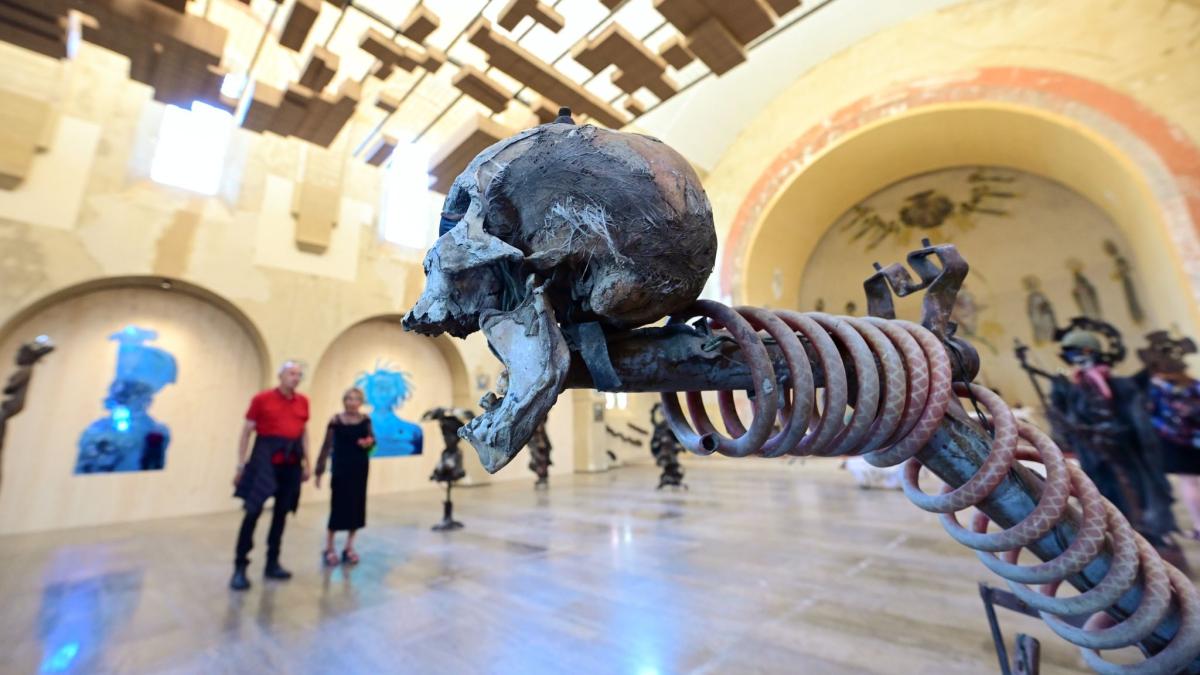 The dialogue failed – and that’s a good thing

A representative of the Palestinian community actually wanted to discuss the Documenta and anti-Semitism with the artist Hito Steyerl in Frankfurt. But he didn’t come. And so a call was made to end the debate. Why that might be the only salvation.

Dhis weekend the Documenta fifteen by the Indonesian curatorial collective Ruangrupa closes its doors. Finally, the “Let there be Lumbung” conference will take place in the Ruru House. People there now tell each other that they were the victims of conservative opinion makers and colonial excesses. Anti-Semitism, was there something? When Taring Padi’s questionable banner was veiled in mid-June and later taken down, the artists rededicated it to “a memorial to sorrow at the impossibility of dialogue.” You just wanted to talk.

The dialogue failed, which was also confirmed on Thursday evening 200 kilometers from Kassel. The Anne Frank educational institution, which was an active part of the debate in the person of its director Meron Mendel, had invited to the discussion in Frankfurt. The expansive baroque title of the event was “Art & Context. From the Mbembe Debate to Documenta 15: The Art and Culture Industry Between Criticism of Antisemitism and Postcolonialism”. But the evening did not do justice to its self-chosen topic. This was also due to the moderation by René Aguigah, who spread a slightly anesthetized mood with a tone like that from the Deutschlandfunk night program.

Expert committee for the Documenta

Meron Mendel, who withdrew as an adviser to the Documenta after a short interlude, announced at the beginning that the announced representative of the Palestinian community had canceled his participation in the event at short notice. Reasons were not given. The chair remained empty, and so Frankfurt had its own “monument to mourn the impossibility of dialogue”. Symptomatic is not only the attempt to occupy a balanced podium, because all “positions” are taken into account, it is symptomatic above all that this has not happened yet again.

Ruangrupa was by no means innocent

But even a balanced invitation policy does not guarantee a fruitful discussion. At the end of June, the participants at the discussion event “Anti-Semitism in Art” in Kassel showed how to talk past each other – despite or because of the high level of balance. Failed dialogue, that was the diagnosis back then. Was it all just a misunderstanding, a communicative rear-end collision? If we had talked to each other more, would nothing have happened? A nice idea, but it distracts from the conflict in the matter.

The artist Hito Steyerl took action early on and had her work dismantled shortly after the opening of the art show. But Steyerl refrained from making big statements, she left it at a few hints about a polarized debate. That was surprisingly reserved for her first public appearance on the subject after her withdrawal from the Documenta. Even if one could take their hints to mean that the Ruangrupa were by no means as innocent in the situation as they claim in their statements.

In the discussion between Steyerl, the writer Nele Pollatschek and Julia Alfandari from the Anne Frank educational institution, it became clear that anti-Semitism should not be dismissed as a special case of hurt feelings, but rather as a social grievance. But, and this is the problem, in which postcolonial theory is understood exclusively as a right-wing elite discourse. Criticism of anti-Semitism is then only seen as a pretext for racism. This split in the discourses, the formation of camps and polarization was eloquently lamented on the podium. But can this dilemma be solved with more dialogue alone?

“The next scandal will come if we don’t talk,” Alfandari said. Or regardless of whether you talk, one might add. Because if something remains of the Documenta debate, it is this peculiar belief in the great problem-solver dialogue, the Nongkrongization of public debate. In other words, that overdose of “the theory of communicative action” that lends every panel discussion the traits of a group therapy work-up session, so that one could wish back to the times when the words “I have the feeling” were still taboo in public. The fetish dialogue leads to the content of the debate being removed, it makes a socio-psychological and material enlightenment unthinkable because it has always been talked away.

The fundamental debate is on

More content, less retrospective and introspection, that’s what one would wish for in the discussion of the Anne Frank educational institution. Shouldn’t there be public discussions everywhere about the post-autonomous conception of art, about the persistence of anti-Semitism and its prerequisites, about the ideological entanglements of the modern art world? These are themes, and probably a few others, that the documenta leaves behind, because it is itself only an expression of larger social developments. The round on Thursday did not yet dare to leave the familiar terrain of the previous debate and really go to the basics. But that is now pending.

As Steyerl said, the debate about Documenta fifteen must be closed. So that part in which you repeatedly express your own shock and send the failed dialogue to Doctor Habermas for a medical examination. Because, Steyerl again, the discussion about postcolonial theory and which German needs it serves in this country is only just beginning. And about the Documenta as an institution. This requires criticism and conflict. The dialogue failed? This can also be taken as good news for a change. Then a new phase of debate can begin, with more courage for intellectual analysis and controversy.