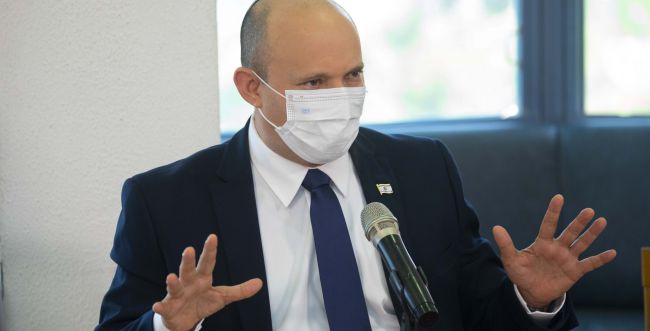 In the discussion tonight (Thursday) chaired by Prime Minister Naftali Bennett and Health Minister Nit Horowitz, the following decisions were made:

7 countries on the African continent were currently defined as red: South Africa, Lesotho, Botswana, Zimbabwe, Mozambique, Namibia and Aswatini. All foreigners from these countries will not be able to enter Israel.

It was further decided that all returnees to Israel from these countries, including those vaccinated with a third vaccine, would be referred for isolation in Corona hotels for 7 days, and would be released after performing 2 negative PCR tests. Passengers who refuse to be checked will be charged for 14 days of isolation at the Corona Hotel.

Bennett refers to the Corona disease at a cabinet meeting, archive (Photo: Srugim)

Prime Minister Bennett has announced that he will conduct ongoing situation assessments, together with the Minister of Health and professionals in his office, in order to closely monitor the outbreak of the new strain and prevent its spread in Israel.

In South Africa, a new and alarming variant of the corona virus has been discovered that raises the fear of a fourth wave outbreak in the country, and also raises the fear in Israel of the entry of the mutation.

The variant, currently called B.1.1529, is defined as “very different” from previous mutations, scientists in the country say.

“We have a mutation that worries us a lot,” said Health Minister Joe Falhala.

Virologists have already discovered nearly 100 cases of the new strain across the country. World Health Organization officials met to discuss Don Boriant, who was also identified in Botswana.

It should also be emphasized that in Botswana the strain was detected in vaccinated. It is possible that the variant developed in an AIDS patient infected with corona, scientists in the country announce, with South Africa having the highest percentage of people infected with AIDS in the world.

After the United States and Israel: Vaccination Approved for Children in Europe

READ Also:  Fear of Tapie and his wife, attacked and beaten in the house
0 comment
0
FacebookTwitterEmail
previous post

The educational tragedy is not solved with Chicanas

No anti-religious symbols on products in Qatar |...