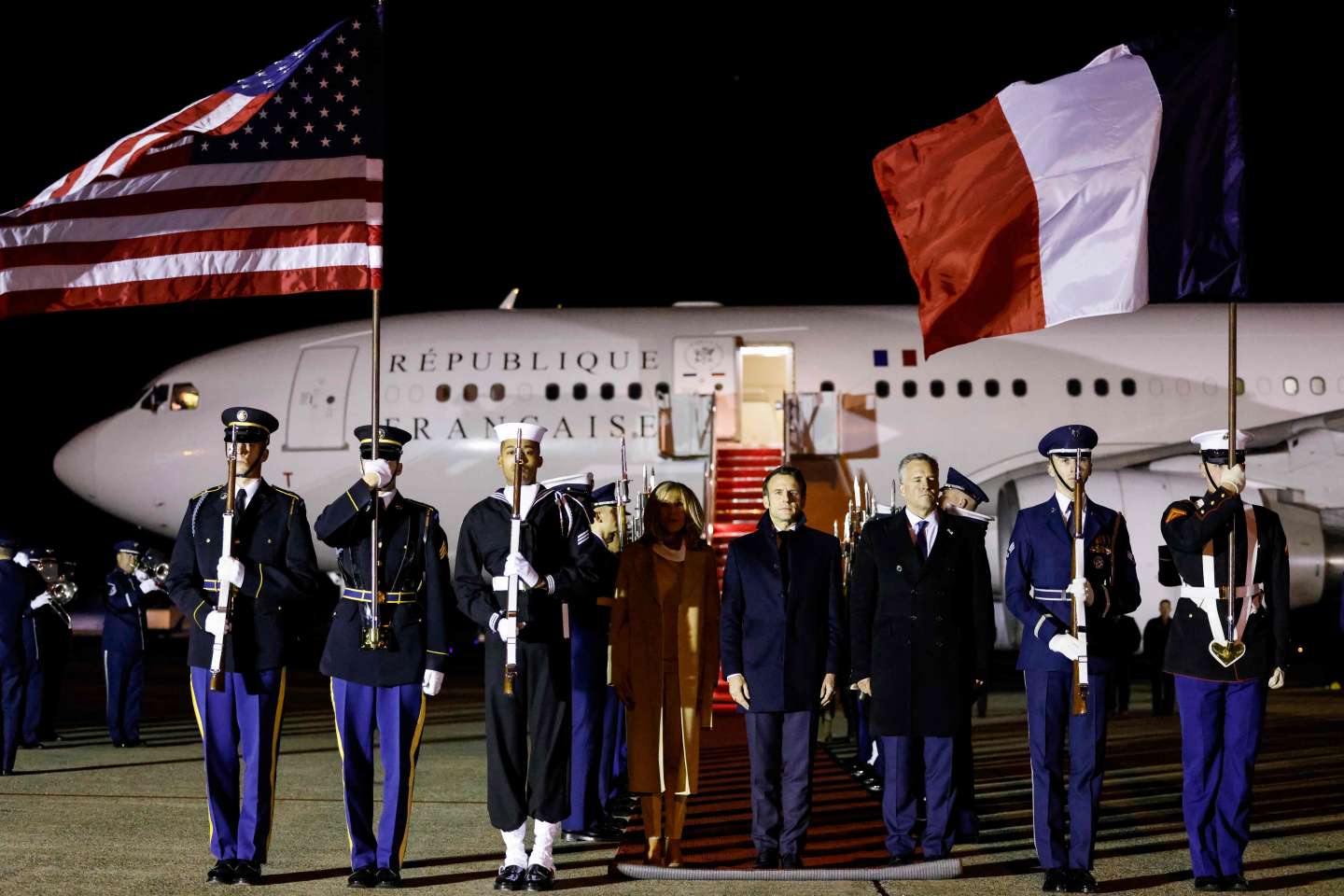 Emmanuel Macron begins, Wednesday, November 30, his three-day state visit to the United States for what should seal, after a serious diplomatic crisis between the two close allies, bilateral reconciliation despite some turmoil around American trade protectionism.

“US! A moment to celebrate the friendship between our two countries. A moment to progress together in a time of great challenges”, he tweetedin English, shortly after his arrival Tuesday around 7:40 p.m. (1:40 a.m. Wednesday morning in Paris) at the Andrews military base, in the suburbs of Washington.

The French president intends to discuss with his American counterpart Joe Biden the massive plan to support the energy transition – Inflation Reduction Act (IRA) – which grants generous subsidies to electric vehicles, batteries or renewable energies provided that they are “made in America”.

In front of the big bosses of the two countries received for lunch at the Elysée just before leaving, Emmanuel Macron estimated, according to the presidency, that this law would “on the right track, for the benefit of the ecological transition”but included “protectionist measures that pose major challenges for European industrialists”.

“To deal with it, he insisted on the importance of a concerted European response and the adoption of a ‘Buy European Act'”which would also give priority to products made on the Old Continent, reported its services.

If Paris has mentioned in recent days the possibility of snatching « exemptions » to the IRA for some European industries, we also know that this will not change the architecture of this crucial plan for Joe Biden’s balance sheet.

Especially since these exceptions remain very hypothetical. “For the moment, we are in a listening phase to fully understand the concerns of our European partners”, said Tuesday to French journalists, a spokesman for the White House, John Kirby, suggesting that no concrete decisions should be expected during this visit. He assured that this plan was as favorable for the European economy as for the American economy. “Clean Energy Investments” are going “benefit to all”he pleaded.

Joe Biden himself does not seem to be in the mood to apologize for his measures in favor of the industry of the United States which are intended to allow “no longer be taken hostage” by other countries, he warned on Tuesday, while visiting a microchip factory in the state of Michigan.

Read also: Article reserved for our subscribers “The new “made in USA” offensive infuriates European governments”

These frictions should in any case not spoil the celebration of this state visit, the second for Emmanuel Macron who was already Donald Trump’s guest of honor in 2018. “It’s about honoring our oldest ally”a dit John Kirby. “France is literally one of the threads from which our nation is woven”he added, multiplying the superlatives with regard to the « leadership »of “experience” and of “wisdom” of Emmanuel Macron who has, in the eyes of the American government, the advantage of “longevity” in office compared to a German Chancellor or a British Prime Minister who came to power more recently.

This marks a change in mood since the French anger that arose just over a year ago. In September 2021, the United States announced a new alliance, Aukus, with Australia and the United Kingdom, arousing the ire of France, which saw itself kept out of the American strategy for the key Asia region. -Pacific and lost, in passing, a mega-contract to sell submarines to Canberra.

Read the story: Article reserved for our subscribers Between Biden and Macron, a difficult reconciliation after the Aukus agreement

Since then, Washington has taken many steps to appease its ally. “The level of cooperation, its depth, is quite remarkable when you think about the state of relations about a year ago”said John Kirby.

“Over the past year, France has been at the heart of literally every national security issue that matters to Americans and to our allies.”he insisted, referring to a partnership “resolutely turned towards the future”.

On Wednesday, after talking about space cooperation with Vice-President Kamala Harris in the presence of French astronauts Thomas Pesquet and Sophie Adenot, the environment with American parliamentarians and civil nuclear power with industry players, the Head of State will speak to the French community then meet, with his wife Brigitte Macron, Joe and Jill Biden for a “private dinner”.

Read also: Article reserved for our subscribers In the United States, Emmanuel Macron as a non-aligned ally

Thursday, it is in a much more solemn, although festive, that Emmanuel Macron will be received at the White House, freshly adorned with the decorations and illuminations put in place for the end of the year celebrations. Between Christmas trees and figurines, he will be welcomed by his American counterpart during a ceremony punctuated by twenty-one cannon shots and hymns.

After a meeting behind closed doors in the Oval Office, a joint press conference and a meeting with the leaders of the American Congress, will come the sumptuous moment of the State dinner. Under a tent erected in the gardens of the White House, it will be hosted by Jon Batiste, singer and composer but also a personality committed to the defense of the rights of African-Americans. This jazzman who navigates between pop and soul is a pillar of the music scene in New Orleans, the once French city of Louisiana where Emmanuel Macron will go on Friday for a visit dedicated to the Francophonie, in the presence of filmmaker Claude Lelouch and by dancer and choreographer Benjamin Millepied.

Read also: Article reserved for our subscribers In Washington, after the midterms, questions about the strategy in Ukraine

Beyond trade issues, the American meeting should allow the presidents of the two allied countries to show their unity in support for Ukraine and, perhaps, to outline a common message in favor of the idea negotiations, in the long term, to end the war launched by Russia – a theme dear to the French head of state that some, in Washington, are also beginning to defend.