European swimming championships, the 16 year old Benedetta Pilato sets the world record in the 50 breaststroke. In the 800 freestyle Paltrinieri silver and Detti bronze

World record and gold medal for the sixteen year old Benedetta Pilato in the 50 breaststroke at the European Swimming Championships in Budapest. The blue stopped the clock at 29 ″ 30, one tenth less than the previous record. It is the second Italian together with Federica Pellegrini to hold a world record. A shining medal on a day in which Italy shone again.

In the 800 freestyle it is the Ukrainian Mychajlo Romanchuk to win the final ahead of the blue Gregorio Paltrinieri, silver, and Gabriele Detti bronze. The Ukrainian finishes in 7’42 ″ 61, Paltrinieri in 7’43 ″ 62 and Detti in 7’46 ″ 10. Beautiful medals even if there is a small disappointment: sport not having repeated the gold and silver double in London 2016. “I tried in a thousand ways, I tried against Romanchuk to escape him in the central part but I couldn’t take a stronger step. He beat me. But it’s a good time and it’s another medal even if it’s never nice to lose like that. But I leave with five medals and a loot like this I did not hope for. The others are there, there are still two months to go until the Games and there is still a lot of work to do ”said Paltrinieri interviewed on Rai2. 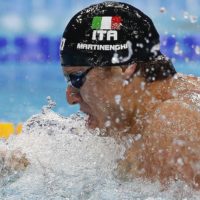 Another beautiful medal is that of Nicolò Martinenghi who won the bronze in the 50 meters breaststroke. Victory of the British Nicolò Adam Peaty gold with 26’21, second place for the Belarusian Shymanovich 26’55. The blue finished in 26 ″ 68. “My first individual podium, I believed it. I have no regrets and I am very happy, so I am very calm, I enjoyed this final. I have reached a point that I have been waiting for a long time – the swimmer told Rai2 – I am no longer a superfluous presence “.

READ Also:  A record of vaccinations Almost 15 thousand in one day - time.news

Freewheeling – The Zoncolan of nightmares establishes the hierarchies

Bitcoin falls below $ 34,000. In a month practically halved

“It is not certain that it will reach”

Video – Incidents – In Petrozavodsk, a car...

“In what it was convenient to bring money...

The Russian national team lost to Denmark and...

WHO: Indian strain COVID-19 is found in half...

US Ambassador will return to Russia in the...

US Ambassador will return to Russia in the...

Between Merkel and Draghi “no problem” apart from...

We dismiss the ban on dismissal. Cazzola’s appeal

This website uses cookies to improve your experience while you navigate through the website. Out of these, the cookies that are categorized as necessary are stored on your browser as they are essential for the working of basic functionalities of the website. We also use third-party cookies that help us analyze and understand how you use this website. These cookies will be stored in your browser only with your consent. You also have the option to opt-out of these cookies. But opting out of some of these cookies may affect your browsing experience.
Functional

Performance cookies are used to understand and analyze the key performance indexes of the website which helps in delivering a better user experience for the visitors.

Analytical cookies are used to understand how visitors interact with the website. These cookies help provide information on metrics the number of visitors, bounce rate, traffic source, etc.

Advertisement cookies are used to provide visitors with relevant ads and marketing campaigns. These cookies track visitors across websites and collect information to provide customized ads.

Other uncategorized cookies are those that are being analyzed and have not been classified into a category as yet.