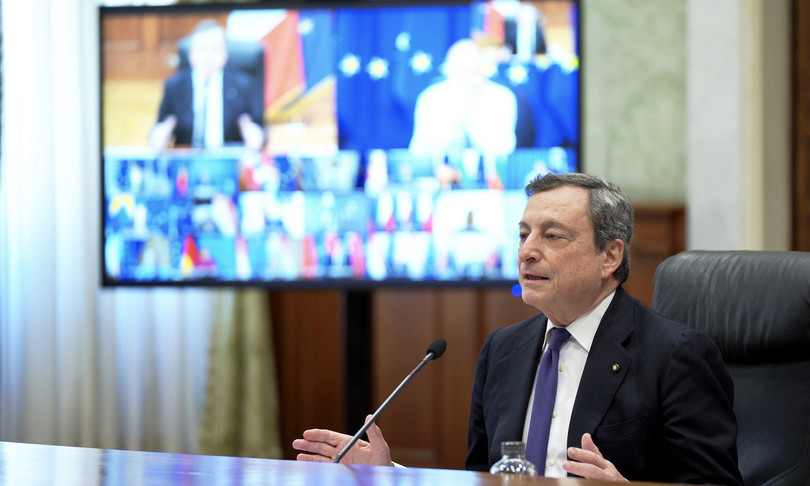 Time.news – European citizens “they feel they are being duped by some pharmaceutical companies, especially AstraZeneca“, for this reason it is necessary to ensure that” the doses produced in the EU remain in the EU “, also through the export control mechanism, recently strengthened by the European Commission.

These are the cornerstones of the intervention of Prime Minister, Mario Draghi, at the EU summit which was held in videoconference and which was also attended by the American president, Joe Biden, to confirm the newly found translantic alliance, also on the vaccine front.

In his speech – European sources report – he retraced the facts related to the Anagni plant, where 29 million doses of AstraZeneca were discovered in recent days.

And on these the former president of the ECB wanted reassurance from Brussels. To the President of the European Commission, Ursula von der Leyen, Draghi asked if he feels right that the doses of vaccines located in Belgium and the Netherlands remain destined for the European Union, in whole or in part.

Prime Minister Draghi then gave his “full support” to von der Leyen’s proposal strengthen the European mechanism on vaccine exports and fully agreed with the proposal to introduce a digital green certificate, also inviting to investigate some possible obstacles to the execution of the project.

“The Member States will need all the help the Commission can give”, Draghi recalled, “because having national platforms and making them interoperable is not a trivial result”. Draghi also called on leaders to reflect on how to address the possible risks of discrimination between people caused by the introduction of the certificate.

The former president of the ECB, with the other heads of state and government, is now also looking beyond the darkness of the pandemic, towards the dawn of recovery. “We need to design a framework for fiscal policy that is able to take us out of the crisis“, he explained during the discussion at Eurosummit on the international role of the euro.

He invited us to take an example from the United States. “In the US they have a union of capital markets, a complete banking union, and a safe asset”, noted the premier who believes these elements are the key to the international role of the dollar.

In particular, Draghi emphasized the importance of creating a common European title. “I know the road is long, but we have to get started. It’s a long-term goal, but it’s important to have a political commitment,” he noted.

On the European front, the summit concluded with the common agreement to “work to increase the production of vaccines and improve the ability to distribute them in the Member States”. And the United States can help in this. Joe Biden in his speech “extended a hand to the EU” confirming the new course.

“We have identified the issues on which we are committed together, in particular on the need to ensure access to vaccines and supply chains,” explained the President of the European Council, Charles Michel.

“The EU and the US are both vaccine producers, it is in the common interest to collaborate “, added von der Leyen. The challenge of the Twenty-seven at the moment is to limit the ‘escape’ of doses abroad.

Von der Leyen came up with shocking data on theexport of vaccines from the EU “77 million doses since December 1st, 21 million to Great Britain”, has explained.

On the other hand, 88 were delivered to the EU states. “Now we want reciprocity and proportionality”. AstraZeneca? “He continues to fail to comply with contracts and until it does, it will not be able to export, “he clarified.

The goal is to get “360 million doses in the second trimester“, including the 10 million Pfizer-BionTech that will be distributed” in a spirit of solidarity “to meet those countries, led by Austria, which complained about” allocation imbalances “after they had staked a lot on AstraZeneca and are found without supply.

The EU leaders, irritated by the claims of the Austrian Chancellor, Sebastian Kurz, have nevertheless confirmed that the distribution takes place and will take place on the basis of population