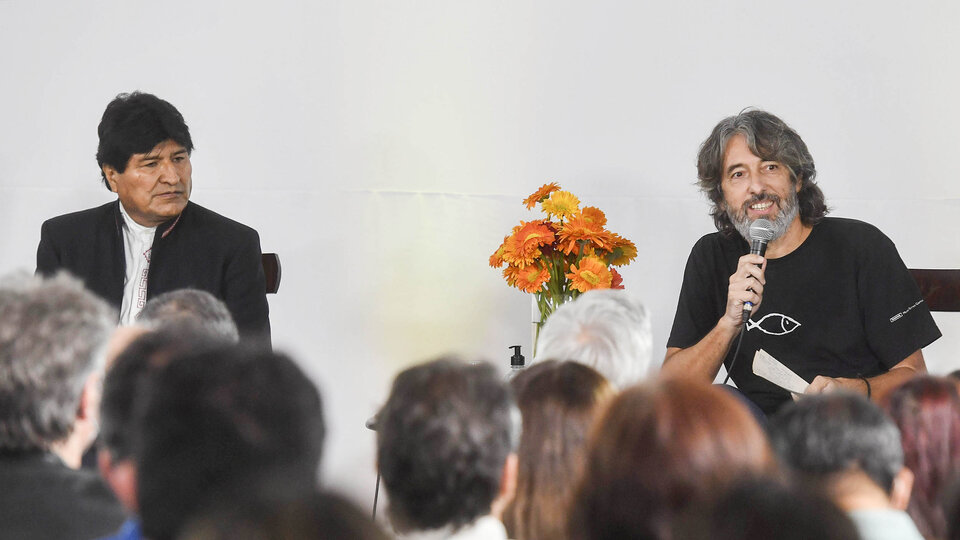 Evo Morales and Alvaro Garcia Linera, partners in the presidential formula that marked the course of Bolivia for 14 years, they crossed paths again in Buenos Aires. Alfredo Serrano Mancilla could put them together for a juicy interview which will be broadcast this Saturday at 3 pm on the program The blackboard, by AM 750. And the Spanish researcher and economist had the virtue of capturing another side of these two figures of the Latin American left: thus, they undertook a journey through childhood, the legacy left by their parents and the way in which they met. There was also time for the fateful days of the 2019 coup, with an emphasis on the flight that deposited them in Mexico, and an acknowledgment of Argentine “solidarity.”

Recalling his childhood, Morales commented that in the town of Orinoca his family was highly respected. His parents instilled in him ethics, discipline and respect for women, because “women are the ribs of men”. While, Garcia Linera he emphasized the teachings of his mother, who repeated to him: “Live from your own work, not live on income or live off savings “.

About the first time that life crossed them, Morales and García Linera made reference to an activity in the Tropic Federation to which the former vice president was invited to analyze the Bolivian political situation. García Linera said that that place “was not a shed, it was a piece of land with some leaves on top, there were no more and there the workers-style colleagues, all with their notebook and pencil noting.”

When it comes to rescuing the most valuable of the other, two concepts stand out: loyalty in Álvaro and the ability to unite in Evo. For García Linera, a characteristic very characteristic of Morales is “historical optimism.” So much so that, One month after the November 2019 coup, the former president was already thinking about how to return to Bolivia. Morales said in that sense that it was the former Cuban president Raul castro who convinced him not to because, according to what he said, “If they put you in jail they will poison you, or the prison inmates are going to create a riot and there they are going to kill you. “

In another part of the extensive interview, both recalled the fateful flight to Mexico after Morales’ dismissal, which is reflected in great detail in Evo, rescue operation, the new book by Serrano Mancilla. The coca grower leader recalled that he did not cry or panic, although he was scared when long delays began to be recorded at the Chimoré airport. It should be remembered that months ago a Mexican Air Force pilot confirmed that there was an assassination attempt against Morales which included a “rocket launcher shot” that the aircraft carrying it managed to dodge.

The two leaders of progressivism in the region did not miss the opportunity to thank the support received during their stay in Argentina as political refugees. “On Friday, Saturday, Sunday someone would ring the bell saying: -Hi Evo, asadito, asadito, asadito”he joked Morales, who added that Bolivian migrants arrived every weekend with vegetables and fruits, and that for that reason at one point “he almost set up a store to sell.” In the same way, Garcia Linera highlighted several things of his life in Argentine territory, but above all the “culture of solidarity”.

Of course, as men who breathe politics 24 hours a day, there was also time to analyze the Bolivian situation. For Garcia Linera, the banner of fraud is “the new slogan of an electorally losing right that under this pretext he can use violence, arms and, in the case of Bolivia, murder or massacre to preserve and defend his interests. “In the same vein, Morales remarked that the The coup is not only of a military nature, but there can also be “a congressional coup or a judicial coup.”.

The charismatic former president assured that, currently, he lives “with a borrowed car” and taking out loans for invest in breeding wobbly, a freshwater fish that, according to García Linera, has “an extraordinary flavor.”

Atlantic and Mediterranean coast: what is this species of fish that bites swimmers’ legs?
Posted onAugust 10, 2022

What you shouldn’t forget about Berlin’s bathing lakes
Posted onAugust 10, 2022