Experts assessed the impact of the new lockdown on the issuance of loans :: Finance :: RBC 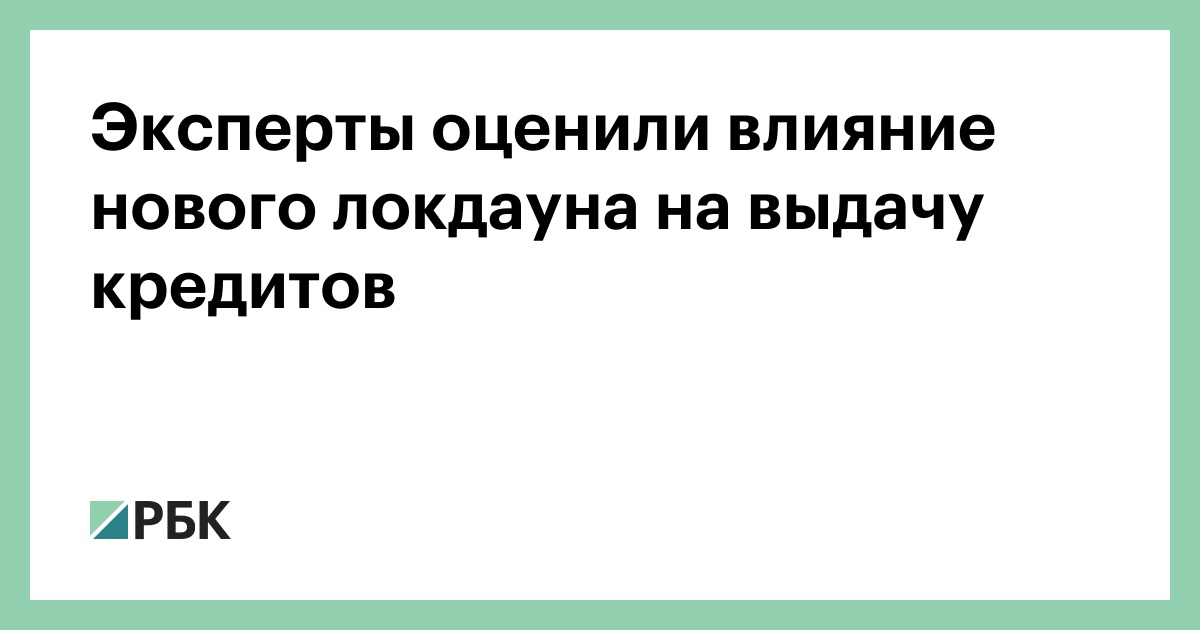 During the first wave of the pandemic, Russian banks sharply cut their approval rates for retail loans. Thus, according to the National Bureau of Credit Histories (NBCH), in April last year, creditors refused 71.8% of applications – the share of satisfied applications for the first month of the self-isolation regime fell by 6.8 percentage points. In September of this year, Russian banks tightened their approaches to clients, but experts attributed this to an increase in the regulatory burden on creditors.

A repetition of the situation in the spring of last year should not be expected, says the senior managing director of the NKR rating agency Alexander Proklov: “The epidemic holidays announced in Russia are much shorter than the April-May 2020 restrictions, and, moreover, they have a slightly different format. It is expected that trade and service enterprises will close for a short time, or in some regions they may not close at all, and construction and industry will largely continue their work without restrictions. “

The restrictions will nevertheless put pressure on the income of a large number of companies, especially from the services and trade sectors, although their timing is not yet critical, notes Ksenia Yakushkina, junior director for bank ratings at Expert RA. At the same time, she considers the likelihood of prolongation of antiquity measures to be high.

The timing of the new lockdown will be critical, believes ACRA CEO Mikhail Sukhov: “December accounts for a significant part of financial forecasts for many industries, including those related to loan servicing. Therefore, if business activities are significantly suspended in December, there will inevitably be a noticeable negative pressure on GDP and the solvency of enterprises and the population in amounts comparable, ultimately, to 2020. December is the most risky month for the domino effect to materialize, ”emphasizes Sukhov.

What to expect for borrowers

The uncertainty of the situation with the pandemic may lead to the fact that banks will further strengthen the risk metrics “following the example of the last lockdown,” Yakushkina believes. “There is no need to wait for a complete stop of issuances, now it is possible to fine-tune the underwriting and understand the possible level of default based on the experience accumulated since the beginning of the pandemic,” the analyst explains.

Banks already have statistics on defaults that occurred in the first wave of the pandemic, so they will be able to “draw the right conclusions,” said Artur Aleksandrovich, General Director of the United Credit Bureau (OKB): risks “.

In some large banks, RBC confirmed that they are wary of looking at certain groups of clients.

Will there be a new wave of restructuring

According to the Central Bank’s estimates, in the period from March 20 of last year to September 29 of this year, Russians submitted more than 3.9 million applications for debt restructuring, credit or mortgage vacations (.pdf). Lenders approved a little less than 60% of applications and revised the terms of 2.1 million contracts for more than 1 trillion rubles. The surge in applications came in the spring of 2020, but the regulator has long recommended that banks be more loyal to customer requests for restructuring. In October, the Central Bank announced that “the need for this kind of support has been largely satisfied” and did not renew the recommendations.

The growth of requests from borrowers for concessions will depend on the duration of new sanitary restrictions, analyst of NRA bank ratings Natalya Bogomolova believes: “With a short-term lockdown, the monthly increase in the number of requests may reach 20-30%.”

In some large banks, RBC reported that they do not yet expect a rush of demand from borrowers for restructuring or a loan vacation. Such assessments, in particular, were given by representatives of MKB, PSB, Raiffeisenbank and Dom.RF bank. Sberbank has not yet observed an increase in applications for restructuring or a worsening of the situation in the segment of corporate clients, VTB also does not see “increased demand for credit holidays”, representatives of credit organizations told RBC. 10 keys to prevent emissions from digital technologies in the EU from reaching 40% in 2030 – BBK Kuna
Posted onFebruary 7, 2023

Why does education rhyme with health? – Mental health in difficult times
Posted onFebruary 7, 2023