Fit with vibration plate? For some users this is even dangerous 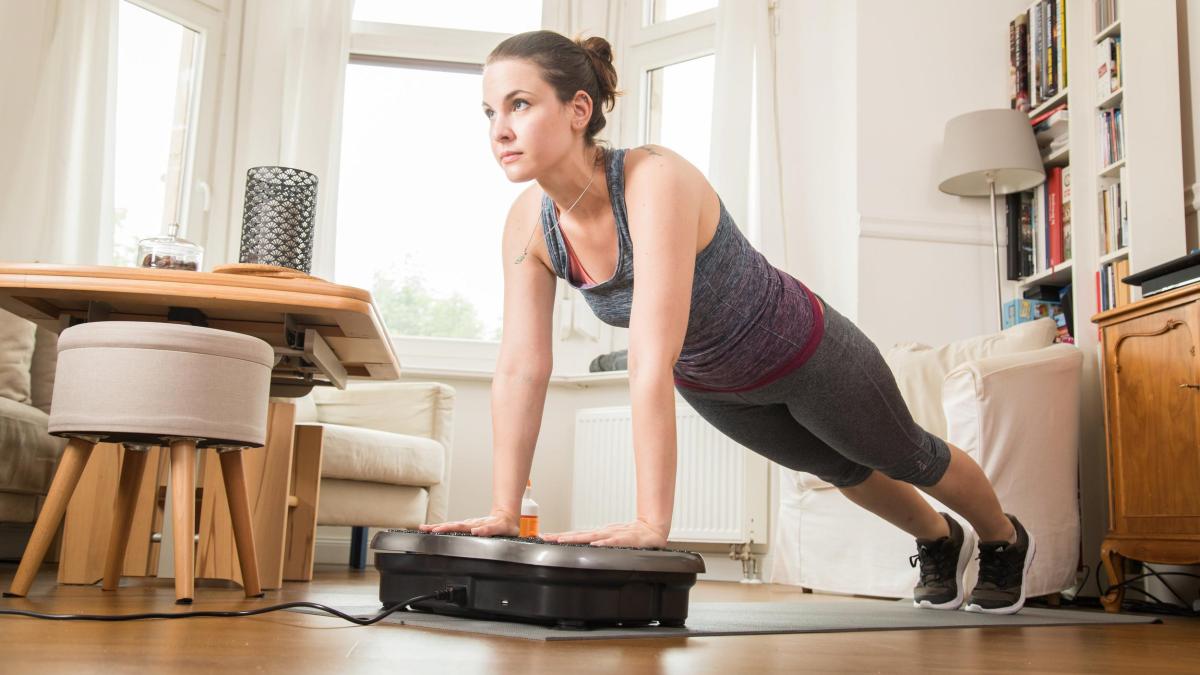 Dhe principle of the vibration plate is as simple as it is ingenious: a small motor sets the plate in motion. These are transferred to the body. To compensate for the vibrations, the muscles tense and relax reflexively in quick succession – including the deep muscles, which are important for stabilizing the body.

That leads to muscle building. And: The training may also give the bones the impetus to build up new substance.

Recreational athletes who want to strengthen their muscle strength, but also people with metabolic diseases or diabetes can benefit from the plate, as can rehabilitation patients after sports injuries.

Vibration plates not suitable for everyone

First of all, you should know: You will not get fit on the vibration plate without doing something yourself. “You can only train if you already have muscles,” says Professor Ingo Froböse from the German Sport University (DSHS) in Cologne.

For recreational joggers, for example, there is definitely an increase in performance. Anyone who has seldom walked longer than the walk to the refrigerator in the last 20 years is not necessarily in good hands on the vibration plate.

“First build muscles, for example through regular sport or EMS training, and then on the plate,” advises Froböse. “This is how the order should be.” EMS stands for electromyostimulation. In this form of training, the muscles are stimulated by electrical impulses.

The sports scientist gives another good reason why there should be a certain amount of basic muscle strength on the plate: “First of all, vibrations are a heavy burden on the body.”

The back and the skeletal system suffered. If the muscles are not strong enough to stabilize the body during the vibrations, damage can occur.

“Even people with joint problems such as osteoarthritis and especially those who wear endoprostheses, i.e. artificial joints, shouldn’t train on the vibration plate, for example,” says Froböse. The vibrations could cause parts of the prosthesis to loosen.

For rheumatic and neurological diseases that are associated with muscle hypertension – for example as a result of a stroke – Froböse advises against the plate. If in doubt, it is better to get medical advice beforehand.

Pay attention to the correct vibration

If you have already trained a little and do not have any of the previous illnesses or restrictions mentioned, then nothing stands in the way of buying a vibration plate. But what should you pay attention to and which functions are really important?

“Make sure you have a wide standing surface in order to be able to perform the exercises in a stable manner,” advises Froböse. If you dig a little deeper into your wallet, you will get a model with a handrail. This helps to keep your balance.

Ideally, the vibrations are three-dimensional, i.e. not just rocking, but directed in all directions of the room. The vibration frequency, measured in Hertz, also deserves attention.

Sports scientist Froböse explains the reason for this: “The various structures in the body react differently to vibrations.” So bones would rather need a quieter, more powerful frequency of 8 to 10 Hertz, for example if you want to use the plate to prevent osteoporosis.

If, on the other hand, you want to activate the fast muscle fibers, you have to be able to go at least in the range of 25 to 40 Hertz.

The crux of the matter is that the frequency information for some products is hidden or not noted at all. Every now and then you will also find the information “Frequency = 50 Hertz”, which then turns out to be the network frequency of the electricity in the small print. Do not confuse!

Carl Christopher Büttner from the German Association for Physiotherapy advises getting expert advice before buying, even if you as a user have already gained experience with it, for example in the physiotherapy practice: Often there are other, higher quality plates – “and they are not necessarily comparable with home appliances, ”explains Büttner.

When the board is finally at home, the next important question arises: What exactly do I do with it now? The simple answer: first set it up properly. Especially in rented apartments, the neighbors are happy if you put a dampening mat under the vibration plate. Often this is already included in the package.

Exercise is usually done while standing for 10 to 20 minutes, always with the knee and hip joints slightly bent, because the muscles are under tension and the body can absorb the vibrations better.

One of the most important exercises is the squat in all its variations. “Generally speaking, vibration plates target the lower extremities, ie legs, glutes and lower back muscles,” explains sports scientist Froböse.

Be careful with push-ups on the vibration plate

If you search for exercise videos on the Internet, you will often find exercises for the upper body, such as push-ups on the board. But caution is advised here, warns Froböse: “If I don’t have enough muscle corsets on the shoulders and upper back to cushion the vibrations, then the vibrations can spread too far in the body to the internal organs or even spread to the optic nerve and cause irritation. “

It is important that the exercises can be carried out cleanly and that you do not feel any uncertainty on the vibration plate, says physiotherapist Büttner. In any case, the choice of exercises should be made together with competent personnel, he advises.

A simple variant would be, for example, to try out the vibration plate in the gym under the guidance of a trained trainer and learn some exercises correctly. After that, investing in a vibration plate at home is also worthwhile. Is shampoo bad for your hair or not?
Posted onFebruary 7, 2023