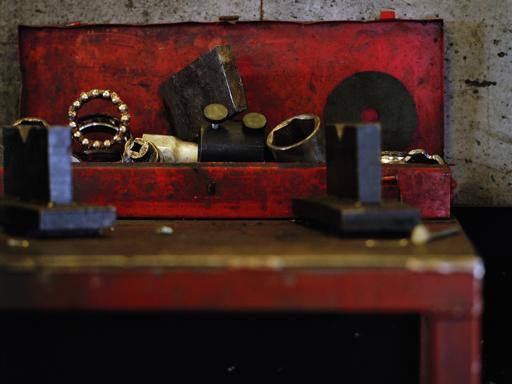 From 18 December to 13 January by Marina Guida. Opening December 18th at 6pm

Visionary, meticulous, the photographic series “Garage Stills” by Jacquie Maria Wessels (Amsterdam – NL), promoted by the Department of Culture of the Municipality of Naples, which will be inaugurated at the Naples PAN on 18 December at 6 pm, documents a reality that it is slowly disappearing, since – as we read in the text of the presentation – computerized technology – in the workplace – is taking over ”.

For the realization of the “Garage Stills” project, the artist went in search of car workshops all over the world, letting herself be fascinated by the shapes, colors and objects unknown to her that animate this wonderful universe of garages.

After a careful analysis of the environment, Wessels creates still lifes directly on site using the elements available.

His sharp but “cold” gaze, by means of the photographic lens, focuses on the last traces of a fading reality, the car workshops, pure “non – places” in which the disorder and the assembly of the most disparate also leave space to imagine the presence that hovers among the work tools: the men who work there (go) do not.

So the world that is told, photo after photo, is made for men, but not only.

Here, in Naples, Jacquie-Maria’s attentive eye rested on details that she could not find elsewhere (for example in the constant reference to the Catholic religion through the images of the saints) and triggers an equally lively reflection on the visual and aesthetic repercussions that they are produced when the gaze of an “etrangère” rests on the landscape and on the country of Italy, on a southern city, on Naples, and on a fragment of “suspended” time.

What questions does it pose? What is the true significance of Wessels’ detailed and corpuscular investigation? What does it want to tell us by following image after image an elusive environment such as car repair shops, a world once characterized by human presence and now replaced by technological intelligence?

If the world of yesterday is gradually disappearing, art and photography are the only means capable of stopping it and reinventing it in order to negotiate again that pact that binds the human being with places, through the story of a humanity that struggles against the disappearance of even a visual memory. So here is that the GARAGE STILLS series by Jacquie M. Wessels which presents a nucleus of about 30 works, made with the analogue camera, constitutes the ideal prerequisite for this link.

His intervention is not limited to mere documentation, it does not intend to adhere precisely to objective, recordable, unequivocal facts, and therefore, to documentary photography, his is a procedure by which the very technique of photography cracks, because the analogue of Jacquie Maria is moved by the desire to exercise a shift, a careless shift that alters the gaze on things and objects: objects that are all repositioned, returned to a dimension of “still life”, a character that belongs to the Dutch DNA and Flemish. It is this throwaway method that makes Wessels a well-rounded artist.

With a clear reference to the iconographic tradition of the Nordic country from which she comes, Wessels’ photos tell how computerized technology can become a vehicle for loss and loss of memory, and that with their reiteration in medium format, they “force” the gaze on a different and only apparently antiquated dimension, which is a trace, instead of the passage of the working man, today in a place that is now dehumanized.

It is no coincidence that, in the words of the curator, Marina Guida reads how these “details perhaps unknown to most, are however capable of recomposing an image so strong in the mind that it brings us, once again, into a context that seems to be placed outside the time, albeit in a current and recognizable temporality “.

At the same time, the stories photographed by Wessels also take on a connotation of female gaze towards the male world, an area to which, however, the artist approaches without deference of a patriarchal matrix but which rather appropriates with attention and lightness. In short, the reality that photography captures takes on a different meaning from that indicated by common sense.

Ultimately, “his photographs are equated with abstract paintings, halfway between the real and imaginary world, a happy marriage between reality and abstraction, present moment and memory; straddling the detail of the object and the universal of history; between abstract painting and photography; between poetic vision and anthropological investigation, between observation and revelation, and present themselves as devices of the psychology of the mechanical society which is inexorably disappearing ”.

In addition to the main Garage Stills series, works from two previous photographic series, “Cityscapes” and the new “Fringe Nature” series, will also be on show. The works of Jacquie Maria Wessels have been exhibited all over the world and are part of various private and museum collections, including: Rijksmuseum in Amsterdam (Netherlands), the Huis Marseille – Museum of Photography in Amsterdam (Netherlands) and the Surinaams Museum in Paramaribo (Suriname).

Gérald Darmanin back in New Caledonia in early March to discuss the status of the archipelago
Posted onJanuary 27, 2023

2,000-year-old amphorae with fish recovered from the sunken Roman ship in the Formigues Islands
Posted onJanuary 27, 2023