The Union of European Football Associations (UEFA) has banned Munich from turning on rainbow lighting at the stadium during the Euro 2020 match between Germany and Hungary on 23 June. The initiative to highlight the Allianz Arena with the colors of the rainbow was earlier made by the city authorities of Munich – in protest against the oppression of representatives of the LGBT community in Hungary.

UEFA is a politically neutral organization

On June 15, the Hungarian parliament passed a law restricting the right of young people to receive information in areas related to homosexuality and transsexuality. In particular, teachers in the country were forbidden to speak during lessons that homosexuality is a normal form of sexual behavior. It is believed that the adoption of this law was lobbied by the country’s Prime Minister Viktor Orban.

The proposal of the Munich City Council, however, was not satisfied. UEFA explained its decision by the fact that, in accordance with its charter, the union is a politically and religiously neutral organization and therefore has to reject the request because of its “political context, which is a message focused on the decision of the Hungarian parliament.”

UEFA’s decision drew harsh criticism not only from the Munich authorities, but also from almost all political parties in Germany. This topic was not ignored by the German media commentators. Their opinions on this issue, however, were divided. While some disapprove of UEFA’s position, others speak out in its defense.

FAZ: UEFA made the scapegoat

“Of course, defending citizens’ rights to self-determination and combating discrimination is not only a task of state and supranational structures. Sport also has a political component,” writes Reinhard Müller, a columnist for the Frankfurter Allgemeine Zeitung (FAZ) newspaper. 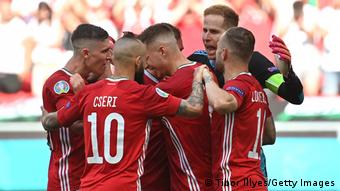 However, the barrage of criticism that has befallen UEFA after the ban to include rainbow lighting at the Munich stadium looks cheap and hypocritical, he said.

“No one is stopping Bavarian Prime Minister Markus Söder, who changes his views so often, to welcome Orban in a rainbow suit. No one is stopping the German Chancellor, whose official representative also supported the initiative of the Munich authorities, to dress a battalion of honor in colorful uniforms. Instead, UEFA is being made a scapegoat, “the FAZ commentator notes.

A similar opinion is shared by the columnist for the Berlin newspaper taz, Jan Feddersen. He acknowledges that the new Hungarian law effectively prohibits members of the LGBT community from speaking publicly about their sexual orientation. 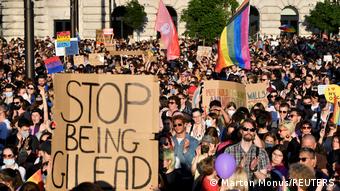 At the same time, lighting the Munich stadium with rainbow colors would look like an instruction, a gesture indicating that, they say, we are good and you are bad, the author believes.

At the same time, he recalls that at the moment there are no openly gays among the football players playing in professional leagues. The image of this sport does not imply the presence of gay players, says Feddersen. “So if you please, stop pointing your finger at UEFA and Orban and point at yourself instead,” recommends taz.

Leipziger Volkszeitung: The decision to light the stadium would be unsportsmanlike

Jan Feddersen is echoed by Andreas Niesmann, a commentator for the Leipziger Volkszeitung. “No matter how beautiful the illumination may look as a sign of tolerance, it would also have an unsightly side,” he is sure. The decision to illuminate the stadium with the colors of the rainbow would be “directed against the country and the team that is our guest,” the author emphasizes.

“How would the Germans feel if the stadium was adorned with German weapons, which we so eagerly export all over the world, at an away match in Latin America?

And he adds that upholding human rights, first of all, is necessary in everyday life. “What we do for this in everyday life is more important than the color of a football stadium,” sums up the Leipziger Volkszeitung.

Stuttgarter Zeitung: There would be nothing wrong with rainbow lighting

The Stuttgarter Zeitung, however, takes a different view and sees nothing wrong with the political message at the stadium. The clear separation of sports and politics is a big misunderstanding and a cheap alibi for sports organizations that are only concerned with continuing to maximize their profits, says sports columnist Marco Schumacher.

“Otherwise, FIFA should not have trusted Qatar to host the 2022 FIFA World Cup, where a huge number of guest workers build stadiums in inhuman conditions and die regularly,” the author notes. “The multicolored lighting of the stadium on the evening of 23 June would be just a tiny signal, but even that was too much for UEFA. What a tragedy!” Stuttgarter Zeitung sneers.