Germany devastated by water The dead, the rescues, the disappeared houses- Corriere.it 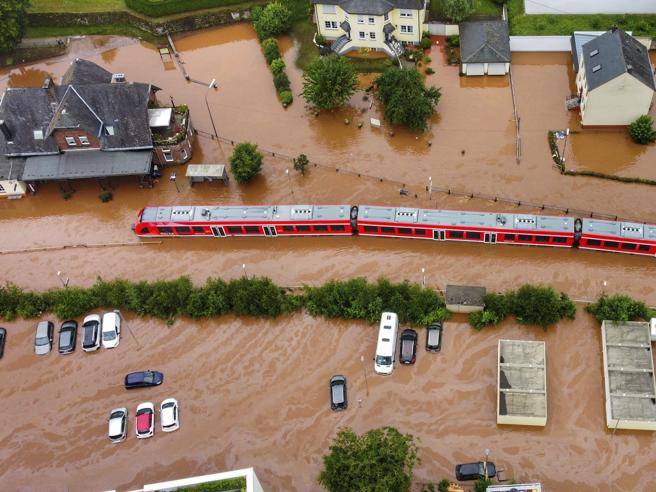 From our correspondent
BERLIN Whole pieces of land devastated, cities and villages isolated from the world, houses simply swept away like skittles by the force of the elements. But above all, dozens of victims, more than 50 dead and at least 1300 missing, in a tragic toll that worsens by the hour. “We have never seen such a destructive catastrophe,” says Malu Dreyer, premier of Rhineland-Palatinate, one of the two western states of Germany, the other being North Rhine-Westphalia, hit by torrential rains and disastrous flooding of many rivers. and artificial canals that run through the region.

In the field the army

The true dimensions of the disaster are still not entirely clear. While a gigantic rescue operation is underway, in which 15,000 firefighters, policemen, medical personnel and soldiers of the Bundeswehr and the federal army take part, the situation remains very serious: there are dozens of people trapped on the roofs of houses waiting for be saved by civil protection helicopters, places that still yesterday afternoon it was not possible to reach, many buildings threatening to collapse, over 200,000 homes without electricity. The greatest fear is that even the Steinbachtal dam, in the province of Euskirchen, south of Cologne, could give way to the point that four villages near the dam, 4,500 people in all, have already been evacuated. There are enormous difficulties in contacting the inhabitants because the mobile telephone network is largely out of order. Rail connections with North Rhine-Westphalia, Germany’s most populous federal state, are effectively suspended.

Angela Merkel, yesterday in the United States for her last visit to the White House, expressed her condolences: «I am shocked by the catastrophe that has affected so many people in the flooded areas. My compassion goes to the families of the victims and the missing, ”he wrote in a message via Twitter. The chancellor admitted that the death toll is likely to be much higher and promised that no effort will be spared in finding the missing people.

Armin Laschet, minister-president of North Rhine-Westphalia and candidate of the CDU for the chancellery, visited Altena, in the province of Sauerland, where on Wednesday afternoon a firefighter died after saving a man in an area of ​​the village semi-submerged by the water. Laschet immediately brought up climate warming, indicating it as responsible for such extreme events: “We will have to deal with similar disasters continuously – he said – and this means that we need to accelerate climate protection measures at federal, European and global levels. , since the climate is no longer the problem of a single country ». The issue of climate is central to the campaign for the elections on 26 September.

Ravage the hills of the spas

One of the areas most affected by the disaster is that of Bad Neuenahr-Ahrweiler, in the Eifel, a hilly region northwest of Koblenz, where according to the police the death toll has risen to about twenty, all carried away by the current, while hopes of finding the dozens of missing people still alive are diminishing. There are eight victims in the province of Euskirchen.
Many rivers and streams in the Eifel, in the Cologne-Bonn area up to the Luxembourg border, in the Sauerland and in the Bergische Land between the Rhine and Ruhr rivers, remain well above the warning level, on the verge of new floods. But according to meteorologist Marco Manitta, of the Dwd, the German meteorological service, the peak of bad weather should have already been overcome and the potential for new water bombs is “significantly reducing”.
The wave of bad weather also hit Luxembourg and the Netherlands. In Belgium the death toll ascertained yesterday is five deaths (in addition to the two victims of the day before): three thousand people have already been evacuated, and there is alarm in Liège for the flood of the Meuse, which could rise by one and a half meters.

With pepper spray from the mirrors and a smoke bomb: this jeep will make you feel comfortable on any road
Posted onJanuary 27, 2023January 27, 2023
Menu