Giulierini: “I put the Beatles and Alexander the Great together” 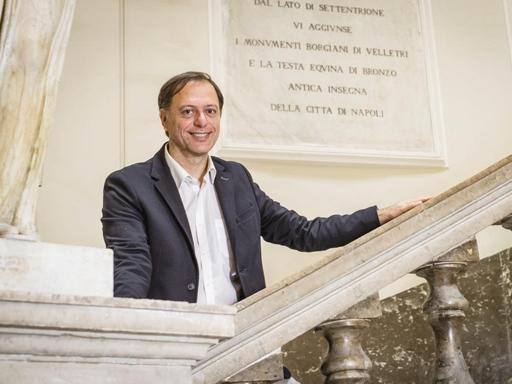 The director of Mann signs “Stupor Mundi”, a journey into the past and announces “in the summer the Museum atrium and gardens open to the public”

Di being a pop director, open to contamination, Paolo Giulierini – since 2015 at the helm of the Mann – had never denied it, indeed he had made it his distinctive feature. And he confirms it now with this book just published by Rizzoli, Stupor Mundi. History of the Mediterranean in thirty objects, in which he approaches the Beatles with Alexander the Great, or Venus in a bikini with Brigitte Bardot. Irreverent? Perhaps, but for Giulierini it is an open homage, a way to modernize the classics, to read the past in a popular way, in the light of myths and objects of the present time.

Director, is the whole book based on this diachronic vision that puts classicism and the contemporary world on the same level?

«Yes, let’s start with objects that are part of Mann’s heritage, but broadening their references. To give an example: starting from Medea and its land, the Colchis, we then arrive at the Janare of Benevento. Throughout the book I try to create these short circuits to explain how the past can be read through the lens of the present ».

But does that mean that nothing has changed? History then is a cyclical time rather than a linear one …

“In a way it is. For example, in a chapter of the book I start from the fight between Pompeians and Nocerini during a contest between gladiators to get to the Heysel tragedy. Some basic instincts are always present in man and this makes us feel the ancients closer to us ».

His whole speech is strongly linked to the theme of Mediterranean identity.

«The topics I am talking about are experienced in a limited area, precisely that of the Mediterranean, where every cultural component that was added has always been assimilated and shared. This is what happened with ancient polytheism, then with three monotheistic religions … every time a component was added, ever new civilizations emerged from this cultural process. This is what should also happen today, I really hope that is where we will arrive, even if it is not said ».

Would this book have come about if you weren’t in charge of Mann?

“The Mann is an extraordinary opportunity for me. The ideas about the Mediterranean are not new, but the exceptional heritage of the museum makes up the work ».

Won’t they accuse her of being too pop? Or to contaminate high and low, after taking football and comics to the museum?

«I am proud of it, I am firmly convinced that it is a positive quality. This is the way in which we get to communicate with the general public. Each initiative of this type is a hand extended to visitors: the current situation requires a different way of narrating from the past, otherwise as institutions we risk extinguishing ourselves ».

“I won’t go into specifics, but if there is a cultural experiment, a vision, then that’s fine. On the other hand, I don’t believe in the occasional occasion which provides an advantage to those who come from outside and not to the museum ».

Director, we’re in the red zone again. What does Mann behind closed doors do?

«We are working with our heads down on many things, starting with the restoration of Alessandro’s mosaic, presented in recent days. Never before have there been no distractions. On March 31st we will open the gladiator exhibition in streaming which will be seen live as soon as the pandemic allows it. It will be an epochal exhibition, I promise ».

And the new spaces of the museum?

“We should be up to speed next summer. We will open the third garden and the museum will be a real living room. The atrium of the museum will become a hall open to the public free of charge and we are also about to obtain from the Municipality the use of some spaces in the Galleria Principe di Napoli. The Mann opens up to the city, the Neapolitans will be able to take advantage of this wonderful place even more than before ».

What do you think of the appointment of Gabriel Zuchtriegel (who was part of Franceschini’s first group of appointments with you) in Pompeii, after Paestum?

«I have paid him my compliments, I think he will do well. Mann holds out his hand to him because, as I have always said, it is impossible not to think of a collaboration and synergy between Pompeii and the Archaeological Museum. I forget the controversy, in my opinion we must be respectful of the competitions, otherwise why would they be done? Now we must all work together, there is so much to do ».

PMU – Arrival of the quinté of Monday November 28 at Paris-Vincennes: Éolien de Chenu led by a master’s hand
Posted onNovember 28, 2022