Gogol’s house was turned into a chess game 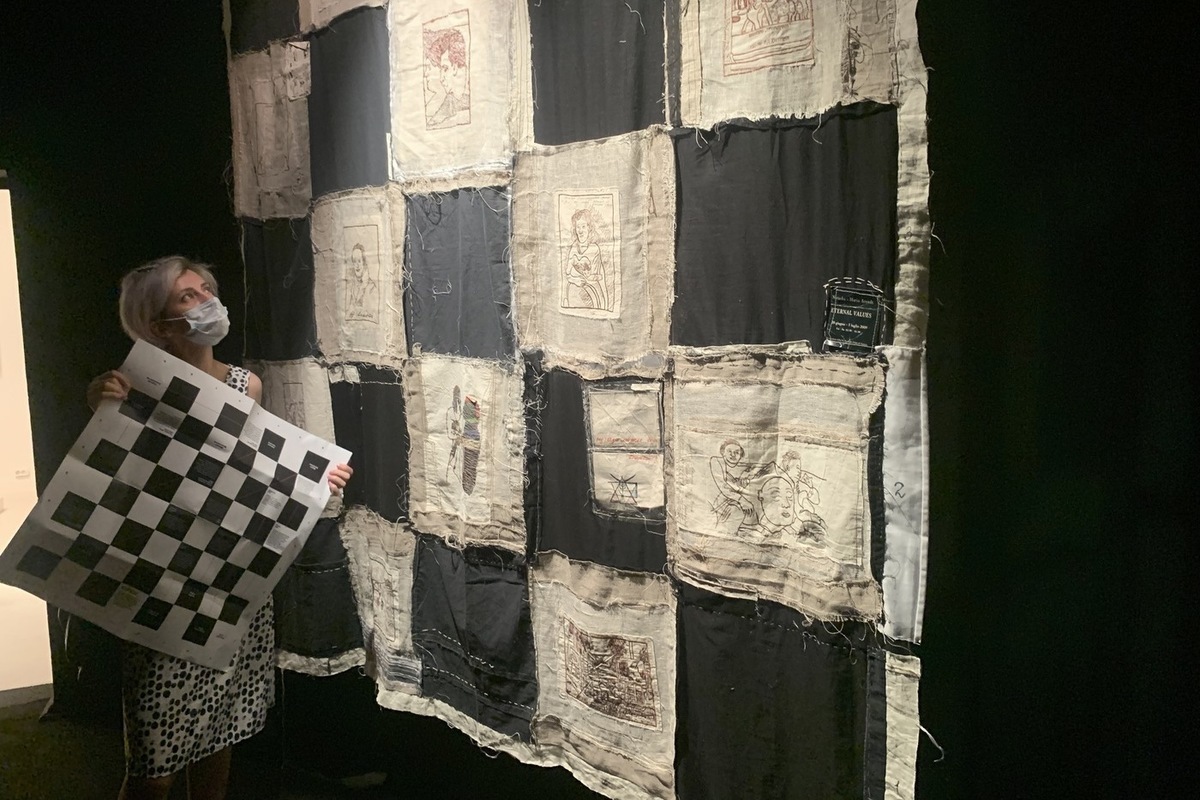 It seems that they decided to postpone the widespread introduction of QR codes in museums, as well as similar restrictions on the verandas of cafes and restaurants. So, it’s time to watch new exhibitions. For example, the ingenious premiere in the New Wing of the Gogol House, where not just an exhibition opened, but a real adventure game. On the “Transformation Horizontal” project it is easy to feel like a chess piece. You need to travel through the art space using a card in the form of a chessboard, and each next move brings you closer to turning from a pawn to a queen. In the final you will find a decisive game in the style of Yoko Ono and John Lenon, where White plays against White. Moreover, all the figures are made in the form of cubes, which sound in their own way.

The transformation into a chess piece occurs as soon as you enter the first hall. You become a pawn and move a2-a4 on the very edge of the board – a non-standard start. The floor of this white room-field is covered with squares of dark and light plywood. The black fields of the chessboard are filled with ironic and absurd drawings by Ignat Daniltsev. In one, a puzzle falls to pieces. Another depicts a magnetic key for a wooden lock, drawn in the form of a lock (the artist also plays with words). Another picture shows the code by which all of humanity and the Earth can be restored. Many drawings contain a strange object, which is also found in the next room – under a glass showcase. The hall with black walls is immersed in darkness, unlike the first, light one. The gilded artifact is a mystery without an answer. From here we jump into the next field – a1-d4. In this white room, a square-shaped hospital tile is found on the floor, which depicts legs in blue shoe covers. Only one pair in slippers. This work was done by Daria Yaromenok. She, like many of the artists participating in the exhibition, refrexes on the current topic of the day – the pandemic.

Actually, the project “Horizontal of transformation” was born in the days of isolation. A chess game is a metaphor for a lockdown situation, when you can go somewhere only according to strict rules. A year ago, our apartments turned into cages – as if in a chess game, only very absurd, almost defying logic. Therefore, the exhibition-game is built on the verge of absurdity. Meanwhile, we make the next move and find ourselves on the black square. Here is another ceramic installation on the floor made of squares, some of which include fragments by the author of the work “Gambit” Anastasia Litvinova. These are her x-rays. In the corner of the dark hall there is a series of sculptures with the grotesque name “Garden City” by Sasha Novoselova. Before us are five-story Khrushchev houses without a hint of greenery and nature – boxes where we spent months in isolation. In the same field-hall, there is a tapestry of Maria Arent, on which various themes are embroidered related to the rich history of the family of her creative dynasty. Among the artist’s ancestors is the doctor Nikolai Fedorovich Arendt (1785–1859), who visited the wounded Pushkin and tried to save him. Or another famous doctor, Andrei Fedorovich Arendt (1795–1862), who spent most of his life in Simferopol, took part in the Crimean War with his friend Nikolai Pirogov. Genetics is, in a sense, also a chess game in which you can inherit a particular gene to make your move in life.

From the black square we fall back to the white one – h2-h4. Here strange, almost totemic sculptures by Mikhail Molochnikov enter into dialogue with the virtual work of Plato Infante, where multi-colored squares change shape and light. Opposite them is a chessboard with its everyday figures from the artist Georgy Kiesewalter. There are eight queens on the board – in the form of a slipper, iron, kettle or saucepan. Our task is to arrange the figures so that they do not eat each other, which is very difficult, but there are 64 options for the correct solution, suggests the curator of the project Alisa Shavrina.

In the finale of a chess game with your own logic that defies analysis, you become a queen. You find yourself in the living room, where you can sit down at the table and play white against white. Moreover, all the figures are of the same shape – in the form of cubes. You need to guess what kind of figure you are in your hands by sounds and weight. Black pieces are heavier, white pieces are lighter. We shake the cube and understand that there is a puck, which means it is a black table. We shake the other, and it dullly responds with the rustle of parchment paper – it’s a white boat. We shake the next one, and there the bell sounds loudly – this is the white queen. Around on the walls you can see photographs of famous artists who made such absurd experiments with the most logical game invented by mankind. Among them are Marcel Duchamp, Man Ray, Yoko Ono and John Lenon, who also play only with white pieces according to their own rules (Yoko invented them in 1966). In a word, in the New Wing of Gogol, you can put yourself an impossible check and checkmate or come up with a personal gambit. Such a game would be to the taste of a writer in whose house an art party is being started.