The most famous buildings associated with the history of the Bauhaus in Germany are located in the city of Dessau – an educational complex and the professors’ villas, erected in 1925-1926 according to the plans of the founder of the Bauhaus Walter Gropius (Walter Gropius). However, the very first building in which the innovative ideas of this Higher School of Civil Engineering and Artistic Design were embodied was located in Weimar. It has survived and was restored in 2019 on the occasion of the then 100th anniversary of this legendary educational institution, which has become the cradle of modern architecture and design.

As part of the restoration project in Weimar, the building was returned to its original appearance and tried to recreate the environment as much as possible, the development of which was also part of the tasks of the Bauhaus at one time. Combining architecture, crafts, applied arts, art, engineering and other disciplines to accomplish the assigned tasks was one of the cornerstones of Gropius’s pedagogical and creative concept. The building, now the product of the first interdisciplinary Bauhaus project, is now a UNESCO World Heritage Site.

The Bauhaus was created by Walter Gropius in 1919 with financial support from the Thuringian authorities. Within a few years they wanted to see the first results of the work of this – in all respects – new educational institution. Therefore, in August-September 1923, an eight-week exhibition was organized in Weimar – the first in the history of the Bauhaus, for which in just four months an exemplary modern single-family residential building was built, equipped and fully furnished – not some kind of model, but quite solid and a full-fledged building.

Later, other similar buildings were to appear next to it for a kind of Bauhaus campus, but this larger-scale idea did not materialize due to the Bauhaus relocation to Saxony-Anhalt – to the city of Dessau, the need for which arose for political reasons after coming to power in Thuringian national conservative forces and government funding cuts.

The exemplary home for the first Bauhaus exhibition was built on a plot of land that the school rented to grow food for its canteen. The times after the First World War were not easy. Such a subsidiary farm significantly improved the diet of students and teachers. The site was located on the then outskirts of Weimar on the Hornberg hill, so the house went down in the history of world architecture as Haus Am Horn. 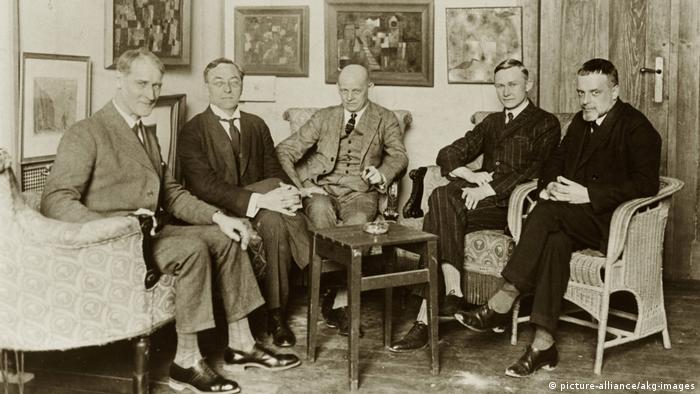 For the first Bauhaus exhibition in Weimar, two projects were prepared. The author of the winner and the realized one was the head of the training spinning workshop of the Bauhaus artist Georg Muche (Gerg Muche).

A total of fifteen Bauhaus teachers and students participated in the creation of the furnishings for this prototype house. They created furniture for all rooms, lamps and lamps, carpets, ceramics, water taps and other equipment, and also developed a color concept for different rooms. Among the participants in the project were the future famous designer and architect Marcel Breuer, in Russian also – Breuer or Breuer, the artist László Moholy-Nagy and the textile designer Gunta Stölzl.

If you look at the plan of this single-family home, it is somewhat reminiscent of the traditional buildings of the Mediterranean region. In the center there is a large living room, around which all other rooms are located – separate bedrooms for the spouses, a children’s room, a guest bedroom, a dining room, a kitchen, a bathroom and a toilet. Premises for servants were not provided. 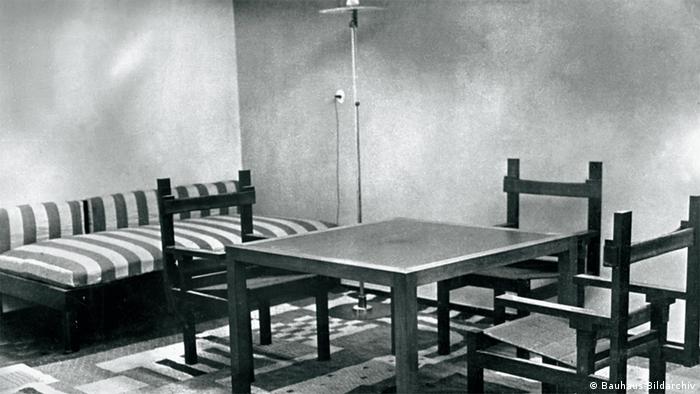 In the case of an increase in the family, over time, the living space had to be expanded with extensions, which then happened, however, during the current restoration, these parts of the building were removed in order to give the house its original appearance. Note also that from the outside, the building appears to be two-story, but in reality this is due to protruding skylights above the central living room. The authors of the project sought to create a practical, economical and most comfortable home using modern materials and technologies.

After the Bauhaus moved from Weimar to Dessau, Haus am Horn was sold. The first private owner was one of the local lawyers, who lived in the house with his family until 1938. During this period, three annexes appeared here, as conceived in the Bauhaus concept. Later Haus am Horn changed owners many times. Now it is owned by the city of Dessau. The original furniture has not survived, except for the built-in wardrobes, therefore, during the restoration, some of the exhibits were restored from photographs, and the places where other furniture stood were marked with outline models.