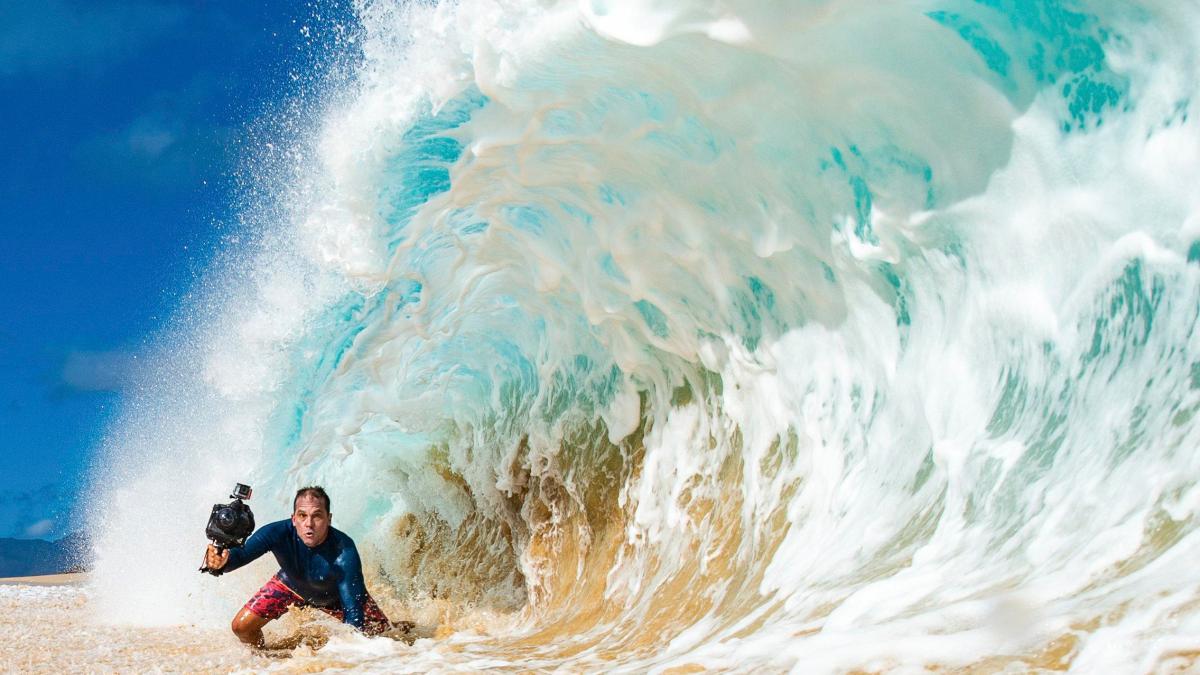 Simagine yourself wading in the shallow waters at Waimea Bay in Hawaii: a meter-high wall of water builds up in front of you, swells more menacingly until it tips over and bursts onto the beach as a hollow tunnel with full force. And you in the middle. A nightmare.

This is the shorebreak, extremely dangerous. A term used in surfing jargon for huge waves breaking where the waves at low tide hit shallow water in the surf zone or even right on the beach. called monster waves. It’s only available at Waimea Beach.

And then there’s Hawaiian Clark Little, 54. He loves those monster waves. He jumps into them almost like a dolphin, voluntarily and willingly, every day in winter. Addicted to the waves, you could almost say. Clark Little is a surfer and wave photographer. He goes voluntarily into the eye of the wave – and takes pictures, and masterfully at that.

Now his best photographs are collected in a new volume: The Art of Waves (Ten Speed ​​Press, 240-page hardcover, English, $40). A best-of collection of his 150 favorite photos.

Most of the photos were taken on Little’s home island of Oahu. Because the heaviest shorebreak in the world can be found on the beaches of Waimea Bay. Up to five meters high. Monster waves, one blatant than the other. A dream of every bodyboarder and surfer.

Probably the most daring way to photograph waves

Clark Little, 54, made a name for himself back in the 1980s and 1990s as arguably the best known and most daring shorebreak surfer on Waimea Bay, Hawaii – he manages to surf waves like this and get away more or less unscathed.

But then Clark Little discovered his second great passion: why not photograph the inside of the wave while you’re in it? And so the result is: “Clark’s View”, probably the most daring way of photographing waves.

It’s a unique perspective: waves from within. Unlike other photographers, he doesn’t stand on the safe shore and use a telephoto lens, no, he doesn’t use a drone either (which would have been scrap anyway after colliding with the masses of water).

The Hawaiian has turned his passion for the perfect wave into a career. He only finds his favorite motifs in the surf: those same shore breaks – big waves that break near or on the beach. He goes out up to six times a day – after all, he lives just around the corner. Just five minutes from his home on Oahu’s North Shore is one of the greatest surf spots: Waimea Bay.

For this purpose, Clark Little wades into the water and lets the wall of water race towards him, dives into the hollow tunnel before the masses of water tumble onto the beach, holds the camera up and is spun around like a fish. In doing so, he must know exactly what he is doing and when, and must always make sure that he gets out of the wave in good time.

How exactly does this work? Talent, timing, physical fitness, daring, outrageous luck. Clark doesn’t really know either. Some monster waves hit the shore full width and knock everything that is swimming around there on the bottom. Once he almost drowned. He stopped counting scrapes and bruises a long time ago.

Clark Little recalled in Hawaii Magazine: “When I first started, people sometimes thought I was going to drown and called for help. They couldn’t imagine me taking the hits out there for fun.”

His wave photographs are spectacular and unique – and a bestseller. Clark Little has long since given up his job as a gardener and can make a living from selling his photographic art alone. There are its waves as books, as films; they adorn T-shirts and mobile phone cases, towels, sunglasses and socks. A coffee mug with a wave costs $28.

Each wave is different in itself. Sometimes a turtle swims in the wave, sometimes a fish, sometimes Clark Little lets himself be photographed in the wave. Every morning in the surf offers new motifs, new waves, different water spray, sand swirls, sunlight.

It never looks the same, even if you have to admit: after the 100th wave you get a little tired looking at monothematic things. But as soon as you realize again that this is a person, foolhardy and obsessed, who is standing in the wave, you can’t get enough of it. Clark Little: “I wouldn’t go out in those big waves if I didn’t enjoy it. I really like being tossed around.”

“Art of Waves” is dedicated to his brother Brock. Brock Little rose to international fame as one of the most fearless big wave surfers, a surfing pro who went on to act as a stuntman in films like Transformers and Pearl Harbor. He died of liver cancer in 2016 at the age of 48.

Where – and how – people can get the new Omicron vaccine in Germany
Posted onSeptember 27, 2022

The conservative hinterland is firmly behind Bolsonaro
Posted onSeptember 27, 2022

When will the 13 Tamils ​​in the Thai detention center return home? Concerned families
Posted onSeptember 27, 2022
Menu