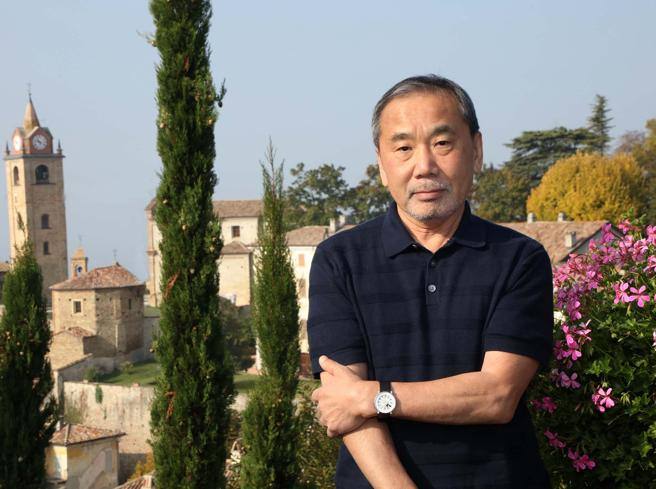 And then, cordial, very polite, the monkey offers to clean the traveler’s back, and the human protagonist of the story, instead of wandering away suspicious or running away terrified, begins to listen to the personal events of the animal, to discuss love and of music, while they (both) enjoy a frozen can of Sapporo. Pure Murakami. After so many books, after so many years. The melancholy of distant youth is back, regrets and sex, women loved and forgotten, a passion for music and baseball. But this time the author’s magic focuses on an element, condensation: his poetics, his atmospheres, his worlds. They all emerge, intact, in 145 pages, in eight stories that come out on Tuesday 9 March for Einaudi. Narrations in the first person singular, as the title of the collection says, translated by Antonietta Pastore. Where the use of the ego, instead of narrowing the visual field, increases the reading plan: memoir, fiction, diary, fable. A corridor of genres and mirrors, in which images multiply and deform. And they always, somehow, remain terribly real. Like when you come in front of the talking monkey and you think that, after all, it could happen to us too to meet her in a spa inn and quietly exchange a few words with her.

Murakami hides and reveals himself: today more than in the past, and plays with his life and his narrative. With its themes, accompanied by liters of beer and occasionally by a well-prepared cocktail. Here then is the loneliness of the male, who struggles to understand women, to decipher them. As in the first story, On a stone cushion, with the narrator (the nineteen year old Haruki? Everyone makes his choice) displaced by the request of the lover of whom he remembers little, if not some detail, had strong teeth (and the many anatomical details of women come to mind murakamiane, starting from the girl’s beautiful ears In the sign of the sheep). Yet of that woman older than him – she must have been around twenty-five years of age -, of that love of one evening the poems remained imprinted on him: They had something that went straight to my heart.

Enchanted, seduced, disconcerted even the high school student who meets a beautiful student in the sad school corridor, her fluttering skirt and the album in her arms With the Beatles (like the title of the story); and the same teenager who the following year gets engaged to sweet Sayoko – finally a memorized name – of which, he admits, I had not understood anything. Like his brother, I was too busy with my things. After all, the protagonist-alter ego of Murakami has always been like this: trapped and held, he feels colorless like the Tazaki Tsukuru of the 2013 novel (in Italy Einaudi 2014) and, probably wrongly, a loser: I have never been beautiful, I have never had particular sporting skills, my grades in school were just average. I’ve never had much success with girls.

Girls, boys. They are the memories of youth, the love and sexual experiences, the clumsy hugs, the encounters with unspecified and old preachers who indicate the meaning of existence (in the second story, The cream of life), the magical autumn of 1964 to emerge in this collection, in which the author, seventy-two years old who does not feel like one, admits: If seeing those who were once adolescents grow old depresses me, perhaps because it forces me to admit that my boy’s dreams have died away. And when dreams die, in a sense for a person even sadder than not actually dying.

Memory, the most precious emotional tool, perhaps a means to survive. Together with music, another engine in the poetics of the Japanese writer, a healing force rather than an accompaniment, a protagonist more than an appearance. Classical, jazz, rock, Anton Bruckner, Thelonius Monk, Robert Schumann: one of the eight short stories is titled Carnival, like the work of the German composer (favorite interpretation of the narrator: that of Arthur Rubinstein) and has a masterful definition of Carnival, without a mask we would not be able to cope with this violent world, as well as a happy character, the ugly and enigmatic F ***. Because if every unhappy family is unhappy in its own way, the same is true for an ugly woman, says the author, quoting the incipit of Anna Karenina.

Poi c’ Charlie Parker, Bird. The jazz legend enters not only in the title of the third story (Charlie Parker Plays Bossa Nova), thanks to the review of one of his albums that never existed and a well thought out and well written joke by a talented young man, but appears in a dream to the ego of this story, for him he takes up his legendary saxophone and plays a solo taken from that record never recorded, which just pops out (and then disappears) in a New York store. Here we are, we enter another Murakamian dimension, that of the inexplicable and the magical, in a strange yet probable, disturbing and mysterious parallel world (like the one with two moons of 1Q84). And pass for Charlie Parker revived and also for his LP never recorded, found and again vanished into thin air; but when you meet the love-sick monkey (title of the story: Confession of a Shinagawa monkey), the author’s universes – the hyperreal ordinary and the distorting supernatural – overlap; the boundaries between the everyday and the fantastic are becoming increasingly blurred. Exactly like those between autobiography and fiction in the story Poetic anthology for the Yakult Swallows: the protagonist is called Murakami Haruki, born in Kyoto, loves baseball, returns to talk about his father and the relationship with him (after Abandon a cat of 2019, Einaudi 2020), and confesses that writing makes him feel like that guy who sells soft drinks at the stadium and apologizes for only having dark beer. That’s exactly what he says: When I write a novel, I too often have the same feeling as him. And addressed to all the people of the world I feel the urge to apologize: “Forgive me, but this is a dark beer”.

First person singular the title of the last story that gives its name to the collection, the only unpublished in the book; the others were published in the Japanese literary magazine Bungakukai between the summer of 2018 and the winter of 2020, some also in the New Yorker and Granta. Here the main character is in a bar, sips a gimlet vodka, reads a book. Until it is interrupted by an elegant woman who upsets that (initially) quiet spring evening. The air becomes freezing, the moon disappears.

The book and the author

from Tuesday 9 March the new book by Murakami Haruki in bookstores First person singular, translated by Antonietta Pastore for Einaudi (pp. 145, euro 18). It is a collection of eight stories written, as the title says, in the first person singular. The last story, the one that gives the volume its title, unpublished. The others appeared in the literary magazine Bungakukai between the summer of 2018 and the winter of 2020. Some of these were also published in the New Yorker and Granta. Murakami Haruki born in Kyoto on January 12, 1949. Among his books, all published by Einaudi, we remember Kafka on the beach (2008), 1Q84 (2011), The colorless Tazaki Tsukuru and his years of pilgrimage (2014), The assassination of the Commendatore (2018-2019) and the latest Abandon a cat (illustrated by Emiliano Ponzi, 2020). In the photo: Murakami Haruki with the Piedmontese landscape behind him in October 2019 on the occasion of the delivery of the Lattes Grinzane 2019 Award (Bottari Lattes Foundation, photo Murialdo), won by the Japanese writer in the La Quercia section, reserved for foreign authors. Murakami’s books – novels, short stories, essays – have been translated into fifty languages

Curiosities of the body and health – Health and Medicine
Posted onFebruary 4, 2023

The shocking rape in the fence: a battle of accusations between the police and the head of the council – Ma’ariv Online
Posted onFebruary 4, 2023