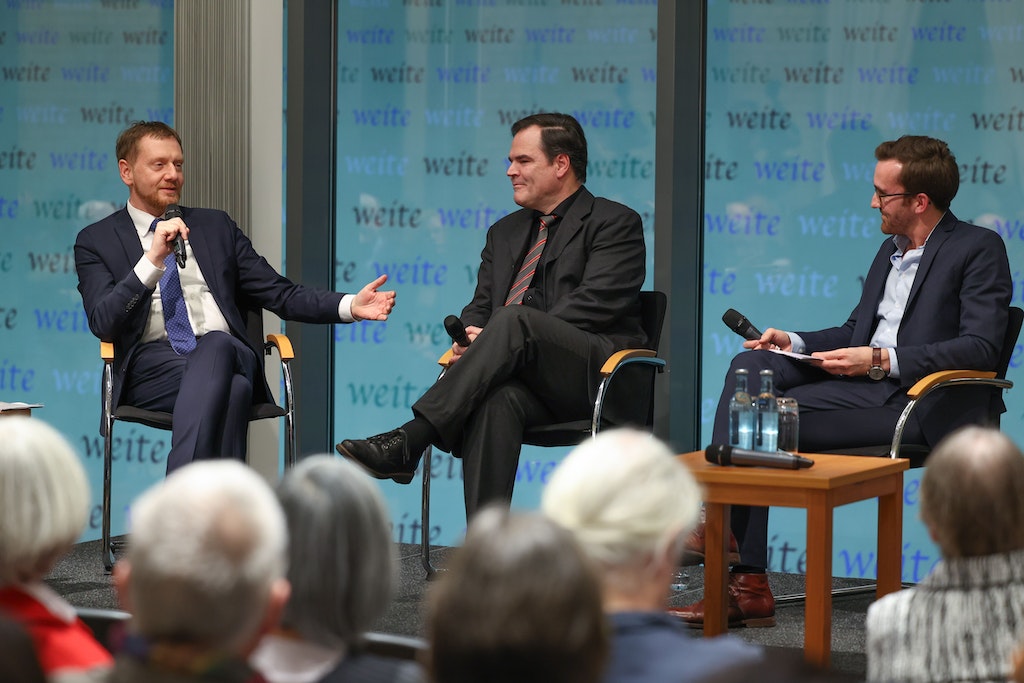 December 8th, 2022, Berlin: Saxony’s Prime Minister Michael Kretschmer (CDU), author Uwe Tellkamp and journalist Martin Machowecz (from left to right) are sitting on the stage during a reading in the state representation of Saxony.dpa/Joerg Carstensen

Unsurprisingly, when such prominent personalities as the writer Uwe Tellkamp, ​​Saxony’s Prime Minister Michael Kretschmer and the Zeit journalist Martin Machowecz come together, it is a media event that attracts a great deal of attention. So one has to say: No wonder that the reading of Tellkamp’s new novel “The Sleep in the Clocks”, organized in the Berlin State Representation of Saxony on Thursday evening, attracted not only literature enthusiasts, but also a noticeably large number of the capital’s press, including Ulf Poschardt, for example .

After all, the Tellkamp from Dresden is known for not only providing controversial theses on society and democracy, but also for initiating heated discussions in which he also likes to confront critical questioners with real anger and counterattacks. There should also be a taste of that this evening.

Uwe Tellkamp: “I don’t want to be portrayed as a right-wing asshole”

Reasons for the numerous visitor registrations

Tellkamp started the eagerly awaited evening with a 30-minute reading from his new novel, which on the one hand reviews the years after the reunification in an imaginative way and on the other hand deals with the Merkel year 2015 in a poetically broken way. In doing so, Tellkamp carves out a world – this becomes particularly clear in the description of a power man who is frantically descending into calculation and pragmatism and who is strikingly reminiscent of the ex-Chancellor – which is permeated by a headline-craving, manipulative press and a policy that, as in a kind of shadowy existence loses its legitimacy.

The reason for the numerous visitor registrations was of course not only the reading, but above all the subsequent discussion, which was moderated by the head of the dispute department of the weekly newspaper Die Zeit Martin Machowecz (born in 1988, country of origin Saxony). Michael Kretschmer, born in 1975, also from Saxony, was invited as an East German understander, diplomatic equalizer and Tellkamp’s theses supporter and Uwe Tellkamp, ​​born in 1968 and also from Saxony, as a discussion fire accelerator.

But before the details of the debate are discussed here, it must be said that it would be too short to live up to expectations and to denounce Uwe Tellkamp as a right-wing troublemaker. With his skepticism about the development of democracy in Germany, his criticism of the corona protection measures, the climate movement or the migration policy of the federal government, the writer expresses an attitude that many people – especially in the east of the country – enthusiastically share. The complete defamation of his theses, the pushing away and locking away in the right corner of his whole person are symptomatic of the attempt to systematically suppress a part of society through stigmatization and discourse exclusion and to pretend that these opinions and these people do not exist at all. There are enough examples to prove that this tactic doesn’t work at all, in fact it fuels the opposite of what is intended.

One should better let good will prevail and read Tellkamp’s theses in the light of the stylistic device of exaggeration, which in the (sometimes excessive) exaggeration of problems is then on the trail of reality. You could see that very well that evening when, after a short banter about the novel, it went straight to the heart of the matter, namely the controversial topic of Corona. Tellkamp was razor-sharp here and remarked that Germany was “addicted to experts” and had fallen prey to leaders (virologists?), especially at the height of the Corona crisis. He criticized the media for following politics uncritically. He said that he no longer reads the Süddeutsche newspaper or the local pages of his Dresdner Zeitung when he wanted to know what was going on, but instead relied on conversations with police officers, firefighters and the “busch radio”.

Tellkamp repeated his criticism of modernism

Prime Minister Michael Kretschmer did what he was supposed to be doing all evening, he intervened and leveled the score by praising the free press and German journalists’ quest for truth – especially compared to the exaggeration and cacophony on social media. Tellkamp was never deterred. His gaze remained fixed, his stance resolute.

Tellkamp repeated his critique of modernism and provoked by saying that many people today feel reminded of the GDR in terms of politics and the culture of discourse. With this, Tellkamp was also referring to social figures like Luisa Neubauer, who were free to dictate to people how society should live, while unchallengedly succumbing to catastrophism, with the media heralding the end of the rule of law if Reich citizens spoke up. “Are there double standards here?” Tellkamp wanted to know.

Interview: Do you really have to smear tomato soup on works of art, Ms. Neubauer?

He was not above shaming the climate activists of the “last generation” and their understanding treatment by the judiciary, media, politics and society and complaining that gloomy “climate narratives” were undermining democracy. Above all, Tellkamp criticized the influence of non-governmental organizations on political processes. Here, too, Kretschmer showed understanding, but softened the criticism to a kind of emphasis on democracy, which admittedly has weaknesses, but which can be improved by struggling and weighing up arguments within society.

Tellkamp was less optimistic. He said he felt patronized by the media and politics and that he was genuinely concerned about democracy. The current Monday demonstrations against the federal government’s energy policy and media narratives that wanted to convey to people what was good and what was bad and how society should behave, especially in times of war in Europe, were discussed. Tellkamp defended himself against such supposed paternalism by confessing pointedly: “I have no desire to freeze for peace, and neither do many people.”

The point at which the evening turned into controversy

Michael Kretschmer rightly stated that, ironically, the absoluteness of the “Last Generation” supporters would shine through in Tellkamp’s uncompromising attitude and his sometimes hopeless statements. “I am a realist. i want to change things You want to bite the edge of the table when you see them getting in their own way,” said Kretschmer, referring to Tellkamp. The writer returned the statement with a smile. In summary, what would Tellkamp wish for as King of Saxony? “I would wish for more liberality. Honest criticism from the media of state structures,” Tellkamp replied.

That was also the point at which the evening actually turned into a controversy. Tellkamp criticized the media for their Corona reporting, with a particular focus on the journalism of the public radio and television stations. The language was totalitarian, dissenters and critics of the Corona measures should have been excluded from the discourse. “That’s nonsense!” someone from the audience yelled and got caught up in a personal battle of words with Tellkamp. He remained confrontational, defended his thesis and repeated that during the peak phase of Corona one could notice what “totalitarian will” meant in the media.

Corona debate: can we talk openly to each other?

At the end there was mushroom soup

Finally, things got tense again when Martin Machowecz alluded to a discussion Tellkamp had with a writer associated with the right-wing scene and asked why he showed up with such people and even met them. Tellkamp reacted visibly piqued, downright angry, and accused the Zeit journalist of having asked an infamous question that was intended to defame him – an attempt that he experiences again and again, in which he is denied his ability to become a democracy due to his contact guilt.

In the end, the discussion partners did not agree, but at least the humor came back. Either way, the evening proved that talking to each other isn’t such a bad thing. The event ended with the joint consumption of Saxon mushroom soup.

Do you have feedback? Write us! [email protected]