“I violent you”. Write down the offenses and post them online- time.news 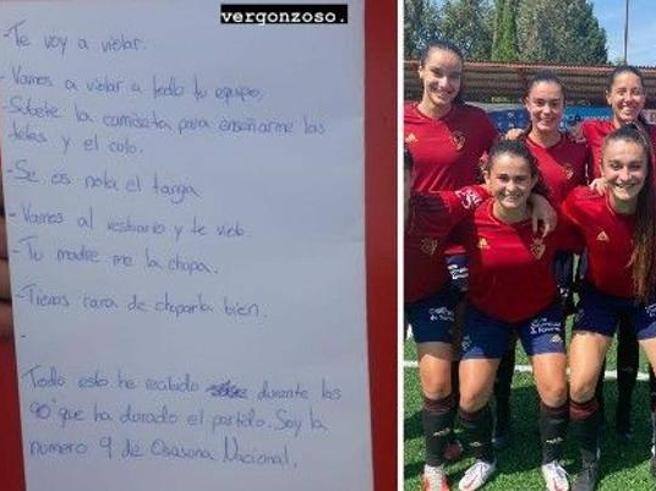 Women’s Serie B, a group of boys on the sidelines launch heavy offenses against the young center forward. Even the female referee insulted during the match, opened an investigation

It is now a football adrift. He is, noticing, at only 17 years old, too the Spanish Karolina Sarasua, Osasuna B footballer Who lived a real nightmare. “I’ll come to the locker room and I’ll rape you”, “take off your shirt and let me see everything” and “we’ll rape your whole team.” These are just some of the

that the 17-year-old felt addressed on Friday 8 October, during her team’s match against SD New Mountain (5th 5-0), from a group of kids watching the game from outside. But the young striker did not lose heart and had the brilliant idea not to be humiliated and collect these very serious insults. Indeed, he took pen and paper and marked everything.

Threats and insults suffered by Karolina Sarasua, 17-year-old forward of the @osasuna B in match held in #Cantabria.
“I’m afraid there are kids with that mentality. Neither I nor anyone should go through this suffering,” he said.
You define them alone. You are like rabid dogs. pic.twitter.com/J8un1O2EGl

One by one, in a list then photographed and shared on your profile Instagram went viral on Twitter, a social network in which she collected thousands of shares and messages of solidarity, also thanks to the help of her companions and both clubs, who amplified her complaint. Karolina Sarasua, who also played in the youth national teams of Spain, received solidarity from her and rival clubs, from the Federation and from all her teammates. A shameful act: “Thanks a lot to everyone for your support”, wrote the girl, who is also the Spanish Muay Thai champion. “I hope that this type of insults will disappear as soon as possible because I do not wish anyone all that my companions and I have experienced.”

But that’s not all. Because he also noticed the shameful episode the referee of the match, Lucia Fernandez Luna, who wrote in the report: “During the second half, I noticed the presence, off the pitch, of five boys around the fence, in the midfield area, behind my assistant number 2, of which at least one wearing a suit with the home team crest, the SD New Mountain. They addressed offensive comments both to the players and to me ». And again: “At the end of the match the delegate of the visiting team, together with player number 9, Karolina Sarasua Garcia, they filed a complaint with me for this lack of respect by communicating the exact terms that were addressed to her ».