It shrinks and moves away.. 22 facts that scientists have observed about the moon 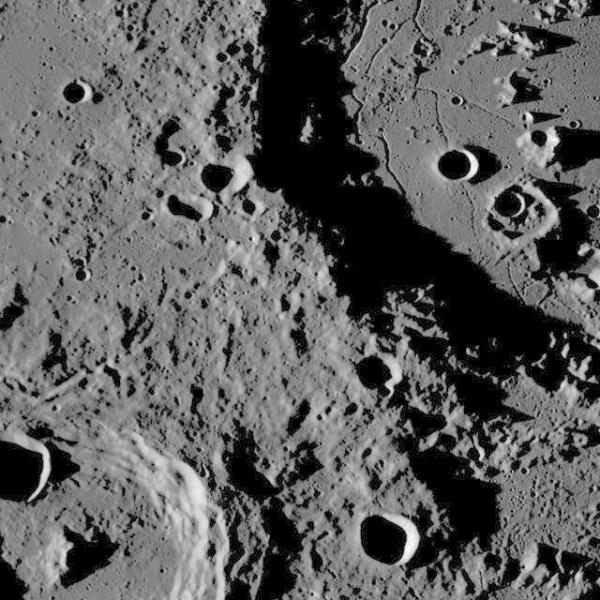 You may not miss a night without looking at the moon, a symbol of peace, calm and serenity of the night, without realizing the reality of this luminous disk in the sky.

The Stacker website has presented more than 20 facts that scientists have collected since the ascent to the moon in 1969, some of which may surprise you when you know them..

There is no life in the moon

Research has shown that the moon does not contain living organisms, including fossils, but there are some traces of non-biological organic compounds, but they are due to meteorite pollutants.

It is believed that the moon was formed after a large body or series of bodies collided with the earth, with the explosion of some material in space, which led to the emergence of the moon.

And the astronauts brought the process “Apollo” moon rocks for analysis, and scientists studied ancient fragments and were able to determine that this happened about 4.5 billion years ago..

The Moon is an advanced terrestrial planet made up of rocky material melted and crushed by meteorites and erupted by volcanoes, and its internal division is actually similar to that of Earth, with a thick crust, lithosphere, and “partly liquid hydrosphere”, according to NASA..

The moon is shrinking

After reviewing seismic data collected between 1969 and 1977, scientists determined that approximately 25% of the moon’s seismic activity was caused by energy released from cliffs or gradients on the moon’s surface.

This activity comes as the Moon’s crust shrinks as it cools, causing it to shrink by about 150 feet over the past hundreds of millions of years..

When Apollo astronauts first discovered the moon, they thought it was a dry planet. However, in 2009, NASA’s Lunar Reconnaissance Orbiter produced data that showed that water is trapped in ice, and as the moon warms and cools throughout the day, water molecules actually float up to Find areas cold enough to settle back on its surface.

Other places of water

In 2020, NASA detected water on sunlit parts of the moon, and the agency’s Stratosphere Observatory for Infrared Astronomy detected water molecules in Clavius ​​Crater, located in the southern hemisphere, the sunlit side of the moon.

The data indicated water concentrations ranging from 100 to 412 parts per million per cubic meter of soil, which is roughly equivalent to a small water bottle.

The Apollo 11 mission was the first to publish the so-called Solar Wind Formation Experiment, which involved an aluminum sheet attached to a pole. The paper was lifted and exposed to the sun for 77 minutes, then collected and transported back to Earth for analysis.

The Apollo missions collected data from papers over a period of years, helping scientists identify differences in the composition and intensity of the solar wind.

craters of the moon

The moon has almost no geological activity or atmosphere, so lunar craters that are billions of years old still exist..

Since it does not have an atmosphere or volcanoes, the crust of the moon is well preserved, and scientists were able to determine the age of the lunar surfaces, and data collected from moon samples helps them estimate the ages of other planets.

The Earth and the Moon are genetically related

Similar compositions of moon and Earth rocks have led scientists to determine a common origin between the two.

And unlike Earth, the Moon doesn’t have enough iron or other elements to make gas or water in the atmosphere.

The surface of the moon is solid

Scientists originally believed that the moon was covered with a layer of an unknown substance, without really knowing what this substance was or how safe it was for astronauts to explore, and after studying the observations of the Apollo 11 astronauts and the samples they took from the surface of the moon, they were able to determine that it is a mixture of dust and rock grains. big.

The Apollo group placed seismometers on the surface of the moon, and during the seventies recorded 28 earthquakes of varying magnitude, and subsequent research showed through Lunar Reconnaissance Orbiter The presence of fault lines on the Moon less than 50 million years old, as well as the displacement of rocks across the surface, both of which indicate regular lunar earthquakes..

The symmetry of moon rocks is divided into 3 basic categories: basalt, which looks like lava, anorthosite, which is lighter rocks similar to those found on Earth, and bricas, which are composite rocks formed by crushing and mixing other rocks.

Although there is water on the moon, the three types of moon rocks form without water, while on Earth, water plays a large role in the formation of rocks such as shale or limestone..

There are giant deposits of heavy metal under the south pole basin of the moon, and scientists are not yet sure of their source.

The reserve weighs about 2.4 quadrillion tons and is believed to be the remains of an iron-nickel asteroid that collided with the moon 4 billion years ago..

The holes are believed to form when a lava tube collapses, although the crater The Sea of ​​Genius It is located in an area with little volcanic features.

Apollo 11’s passive seismic experiment and lunar seismometers helped scientists determine the presence of a small nucleus at the center of the moon.

Later seismometers published during the Apollo 12, 14, 15 and 16 missions revealed more information, with data indicating lunar crust 37-44 miles thick, or about 3 times as thick as Earth’s..

The moon is moving away from the earth

The Moon is moving away from the Earth at a small rate, but there is no doubt that the Moon is slowly receding from the Earth, and Apollo 11 astronauts placed a laser range reflector on the lunar surface, which helps measure the distance between the Earth and the Moon.

showRetroreflector a series of mirrors that reflect laser pulses, shows that the moon is waning at a rate of about 1.5 inches per year.

Unlike earthquakes, which usually average only about 30 seconds, lunar earthquakes can last for quite some time.

These tremors originate at shallow depths 12-19 miles below the surface of the Moon and last for 10 minutes. While scientists are not sure what causes these long quakes, the activity has helped them understand early seismic activity on Earth, as well as the role that liquid water plays on our planet. By spreading the energy caused by earthquakes, thus mitigating their vibrations.

Approximately 4.4 to 4.6 billion years ago, an ocean of magma tens of kilometers deep covered the Moon.

The gravity of the moon helps the earth

Earth has a magnetic field caused by the movement of liquid iron and nickel in the outer core, which helps protect it from destructive natural forces such as the solar wind or cosmic particles.

Scientific research on how the moon’s gravity affects the planet indicates that it “pulls” the Earth’s mantle, which sits on top of this liquid outer core, and causes the liquid to move, helping to generate energy that strengthens the Earth’s shield.

It may look quite round when full, but the moon is actually asymmetric, its crust is thicker from one side to the other, and there are large lumps beneath the surface of many lunar basins likely from lava accumulations.

Scientists believe that the asymmetry and asymmetry could be a result of the Earth’s gravity.

Hermite crater on the Moon is home to the coldest temperature ever measured in the Solar System.

NASA’s Lunar Reconnaissance Orbiter was able to detect a location in the moon’s Hermite crater that was below -415 degrees Fahrenheit, colder than any other recorded temperature in the solar system. despite being much farther from the sun.

Similar cold regions are found in the craters bottoms of the Moon’s south pole in permanently shaded regions.