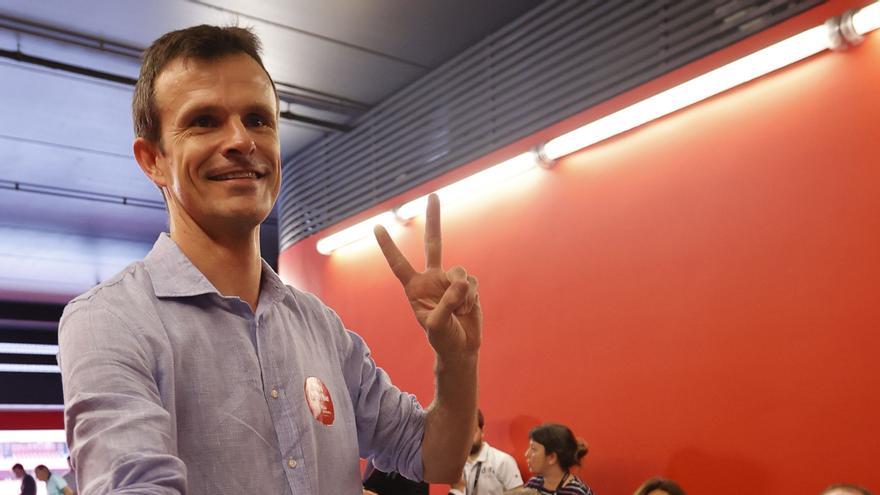 And the maxim was fulfilled. He dictates the history of the athletic elections that whoever presents the most guarantees to formalize his candidacy ends up sitting in Ibaigane’s chair. Four years ago, Aitor Elizegi broke that tradition for the first time, coming back by the minimum against Alberto Uribe-Echevarria, but in 2022 the tradition has recovered. Jon Uriarte swept the first electoral round and this Friday received the majority support of the members to become the president of Athletic for the next four years.

The 43-year-old young businessman from Bilbao won with 46% of the votes Iñaki Arechabaleta (33%) y Ricardo Barkala (20%), both a couple of decades older than him. His message of modernization of the entity has permeated the members of Athletic, as well as his entrepreneurial profile (he confused the Ticketbis ticket sales portal), compared to two more classic profiles, one a historical manager of the Vocento Group (Arechabaleta) and the other a trusted man of the PNV during the last three decades (Barkala).

With the second of them he shared the trick for the bench: Ernest Valverde. ‘Txingurri’, who entered the campaign with less than 48 hours to go before voting, will start his campaign at the age of 58 third stage on the bench at San Mamés, equaling in this facet Xavier Clement. The coach of Extremaduran origin did not assume the reins of a bench since he was fired by the Barcelona in January 2020, when the Barça team led LaLiga.

In that aspect of the elections, that relating to the coach, Valverde has clearly prevailed over Marcelo Bielsa, the bet of Iñaki Arechabaleta. The Spanish coach has been chosen by 66% of the members (adding those who have voted for Uriarte and Barkala), while the ‘Loco’ has been left with 33% of the votes obtained by Arechabaleta.

Uriarte has thus emerged successful from a unorthodox Campaign, in which he has avoided the usual debates in the media with his opponents, focusing the strength of his message on social networks. I bet you professionalization and innovation in the different facets of the club, including the economic one, in the search for new income that guarantees the subsistence and competitiveness of the club, always respecting and reinforcing its peculiar philosophy.

Controversy with the sports director

He has also survived the strong setback that this week caused the loss of who was going to be his sporting director general, Carlos Avina. The spread of some sexist, racist and homophobic tweets of the Mexican forced Uriarte to do without him just a few hours after announcing his bet on him. The relief of him has not yet been announced.

As for the rest of the sports structure, the men’s quarry remains in the hands of the former Levante and Villarreal Sergio Navarro, while for the women’s team bench he will rely on Iraia Iturregi, something in which the three applicants agreed. The renovation of Ander Capawhose contract with Athletic expires next week, will be one of the first issues addressed by the new board of directors.

Uriarte has not announced signings, although he has harshly criticized Barkala’s announcement that he would pay the Osasunist’s termination clause Jon Moncaola (22 million euros) if he was elected president.

A total of 22,689 members have come this Friday to cast their vote in San Mamés, 56.36% of those who were called to the polls. It has been a historical participationalmost ten points higher than those of 2018 (held during the Christmas holidays) and only surpassed percentage-wise in the 2011 elections, in which Josu Urrutia prevailed over Fernando García Macuawho was seeking re-election. Voting at the stadium was a novelty in this electoral event, since until now the custom was to vote outside the Ibaigane Palace, Athletic’s headquarters.

Los polls At the foot of the ballot box, they anticipated the final victory of Uriarte during the day, to whom they continuously gave support of more than 50% of the voters. Both surveys also coincided in that Arechabaleta was the second option of the members of Athletic, with Barkala far behind. And they were right.