Libya, the murder of Werfalli the Benghazi butcher “It had become a problem for Haftar” – time.news 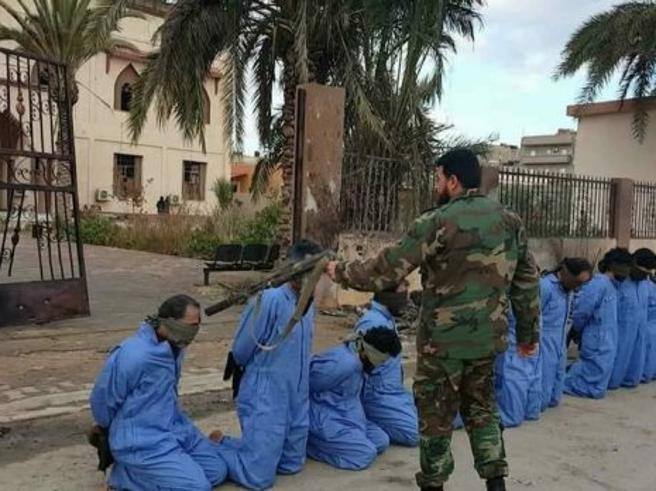 Werfalli had become a ballast. For who? For the General Directorate of the National Liberation Army. A ballast for Haftar? S. The decision to do it out came from the rooms that matter.

The senior officer speaks under anonymity. But speak confidently. He is a man of General Khalifa Haftar and like all of Libya comments on the real news of these hours, which is certainly not the visit of the EU mission: Wednesday, in a busy street in Benghazi, a stone’s throw from the university’s medical school, there was a furious shooting. A group of armed men joined the car of Mahmud Mustafa Busayf al-Werfalli, 43, the executioner of Cyrenaica. He opened fire. The Libyan most wanted by international justice after Saif al Islam, the son of Gaddafi, is killed. The commander of the special forces Al Saiqa (the Thunderbolt) of Haftar. The armed and bloody arm of the general who wanted to become a rais.

Not a jihadist crime, says the anonymous official. It is a state crime. And this is not a conjecture that I pass on to you: information. Much can be understood from how the killers moved, he explains: The assault group acted professionally. He left no traces. It disappeared in a car without a license plate. The jihadists do not have this organizational capacity. And above all, they could not operate in a city under siege, such as Benghazi these days, armored everywhere by checkpoints that serve to guarantee the transfer of power from the government of Al Thinni to the new government of national unity, led by Abdul Hamid Dbeibah. . So is there a link between this crime and the political turning point in Libya? Of course there is.

The first condolences for Werfalli’s death came precisely from Haftar, who accuses the cowardly maneuvers in the dark and cites the example of courage and redemption in the battle of pride and dignity against heretics and extremists. A few words, very different from the warm video and the fluvial emotion expressed when another head of the Folgore, Boukhmadi, died. His battle, Werfalli fought too zealously. I hoped human justice would try him – the icy obituary of the leader of the Libyan Muslim Brotherhood, Abdul Razzaq al Aradi -, today he faces divine justice.

Graduated from the military academies of Gaddafi, an ultra-conservative Salafist, the commander of the five thousand militiamen of Al Saiqa loved to boast of his exploits, to the point of filming himself: on the web you can find the video of January 2018 in which a crowd gathered in front of a mosque in Benghazi, where two car bombs exploded, and in favor of mobile phones and applause, he made ten blindfolded jihadists kneel, to execute them one after the other with a blow to the forehead. This is my law – he challenged -. If they carry out new attacks, I’ll take out other terrorists. Here, in front of everyone. I want to see if they try to prosecute me for this.

The Hague Court had issued two war crimes arrest warrants in 2017 and 2018 and was investigating various atrocities – from the execution of thirty or so prisoners dressed in orange Guantanamo detainees to the death of one woman accused of witchcraft and thrown to a lion – but Interpol has never been able to arrest him, nor the Gambian prosecutor Fatou Bensouda question him: he was covered by a special immunity. And the more Werfalli was sought, the more Haftar promoted him. There are at least seven videos that tell the terrible deeds, bodies disfigured and kicked: Werfalli recited prayers, before decreeing the death of the prisoners. A few days ago, Benghazi was shaken by the massacre of eleven people in a cement plant: someone claims to have heard her brag about it. He made and dismantled: in March, the images of his militias destroying a Toyota dealer, to punish the owner who had not wanted to give up land. Haftar occasionally pretended to lock his loyal lover in prison, only to release him soon. And let it go: Werfalli is a national case – the explanation – and our nation bigger than any court.

Why this execution? It is another Haftar, the one facing the latest Libyan turning point. The Turkish intervention alongside the Tripoli enemies, the withdrawal from the siege of the capital, the ceasefire, the installation of the new government and the elections scheduled by the UN in December, the disease that at 77 is devouring him: the Cyrenaic generalissimo saw his fortune reversed, forced to face growing discontent in Benghazi and Tobruk, as well as asking for more help from his great Egyptian patron, Field Marshal Al Sisi. The latest rumors, reported by the Turkish press, tell of Syrian mercenaries landed directly in Benghazi, to prepare a counter-offensive. Haftar at dusk? Taken for defeat several times, ever since he lost Gaddafi’s wars in Chad, the eternal return to the Libyan scene still has resources. But he also realized that something is changing. And that the military option, to count at the table of a new Libya, is perhaps not enough anymore. Someone like the Benghazi butcher, who knows, risked being an embarrassment: Werfalli was discharged so as not to aggravate Haftar’s isolation, says the high Haftarian officer. Social media, online newspapers, anonymous opinion leaders all agree: The assassination was decided directly by the general. And beyond the comments, a signal comes from Werfalli’s own men. Who publicly swear (unsolicited) allegiance to Haftar. Who deny that they want to break the Cyrenaic unity in the battle. Who ask for justice: Quickly. Something is changing, and being quick is an obligation for everyone. Especially for the general.