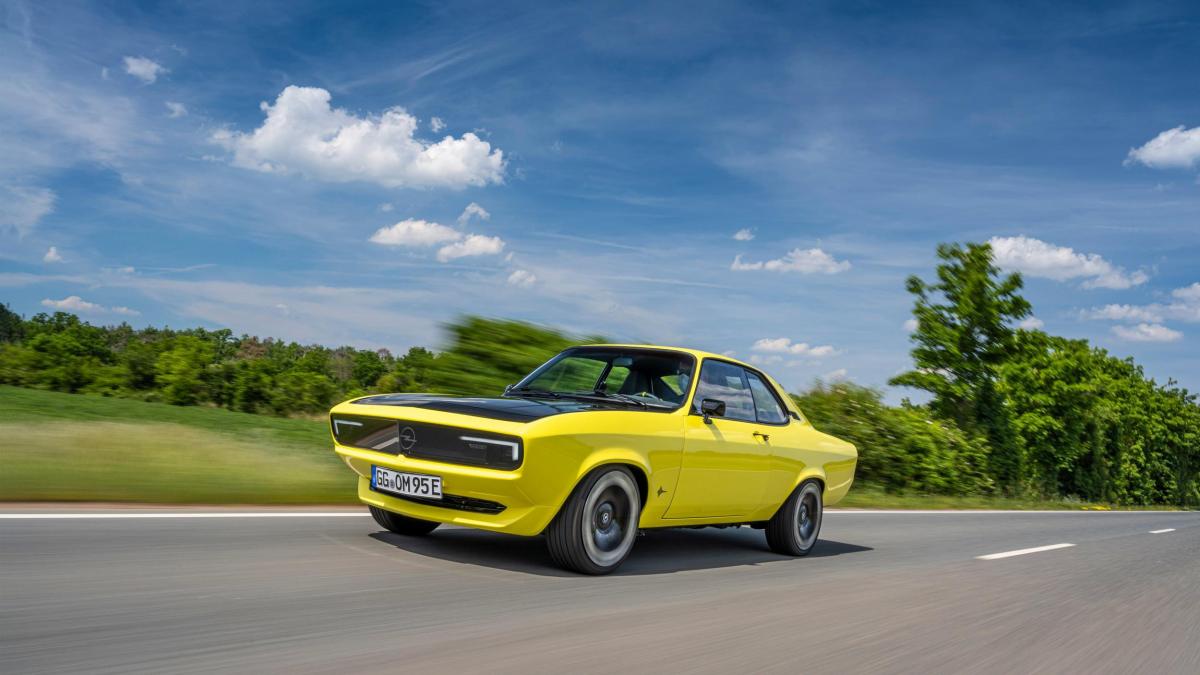 HHere an oil stain on the floor, there a bit of grease on the wall, and above all a wonderfully old-fashioned scent of paint, leather, polish and petroleum: Welcome to the classic collection at Opel in Rüsselsheim.

But something is different here today – and the star of the show only fits at first glance with the more than 100 vintage cars that Opel has spruced up on this floor of the brick hall alone.

Because what is there in poisonous yellow as the supposedly original Manta GT / E sparkles in the headlights, it really messes up the timeline. Although built in 1974, but restored in 2021 and equipped with the technology of tomorrow, this unique piece is something like Opel’s answer to the DeLorean from the cult film “Back to the Future” and a time machine on wheels.

And it starts without the big noise with which Marty McFly and Doc Brown started their DeLorean in the film. This Manta is electric. Where other classic cars like to stutter when starting cold, the Manta GSe electric mod whispers quietly out of the hall like a Corsa-e.

Too bad that there is a strict speed limit on the factory premises. Instead of the 105 PS of the original GT / E sports model from yesterday, 108 kW / 147 PS are now in the data sheet. And the 255 Nm of the e-machine, which was difficult to imagine at the time, are applied from the very first moment.

No wonder that the car makes mighty meters and is fast too fast. After all, the speed limit is only beyond 130 km / h, and the driver can get out of the unusual interplay between the electric drive and manual transmission so quickly that he can quickly exploit this potential.

So how good that the conversion has the blessing of the TÜV and a few minutes later the Manta suddenly swims outside in the flowing traffic and the batteries last for up to 200 kilometers.

Manta soundtrack from the bluetooth box

The engine – just like the lithium-ion blocks in the trunk and under the back seat from a supplier – is not the only particle accelerator on the timeline. Instead, Opel has taken the idea of ​​the restomod, i.e. the modernized classic, which is currently popular with many tuners, designers and restorers, seriously.

From the combustion engine to e-mobility

The Manta, for example, carries the digital cockpit pure panel from the Mokka model behind the steering wheel, and the soundtrack for the test drive comes from a Bluetooth box. Where the radiator grille used to be, there is now a black display, over which winking light messages flicker with LED technology.

“This closes a circle,” says Pierre-Olivier Garcia from the design team. “Because it was above all the Manta that inspired us to create the so-called Vizor face for the new Opel models. And here we turn the wheel one more lap. “

With the electric one-off, Opel is not only making itself heard among the many brands of the Stellantis Group. Above all, Opel is celebrating the launch of one of its most famous cars 50 years ago – not least because of Corona, albeit a little late.

“The Manta may still be at the top of the Opel Olympus together with the GT as an icon,” says classic car specialist Frank Wilke from Classic Analytics. The market watcher has no problem with the renovation, but is rather happy that a few more fans may become aware of this classic.

Manta premiere 1970 as a family-friendly coupe

The Manta began its way to the Opel Olympus in 1970, developed as a response to the successful Ford Capri and as the little brother of the Corvette Stingray, which also had a devil ray in its name and as a logo on the sheet metal.

“The car that we are presenting to you today does not mark any other model as a scrap, but rather joins our previous program as an effective addition and to cover a new requirement”, so it is in the press release for the maiden voyage in September 1970, which appropriately was staged for the maritime name on Timmendorfer Strand.

The Manta, which was technically closely related to the Opel Ascona, was new, chic, sporty and corresponded to the zeitgeist. “Attractive, family-friendly coupés are all the rage. Individualism is required, the formally independent line of the Manta accommodates this wish, “says Opel Classic spokesman Uwe Mertin, summarizing the success of the five-seater.

While the Manta A was still a comparatively serious car, the second generation, built from 1975 onwards, was partly a joke on wheels thanks to the love of the fans and, above all, wild 1980s tuning. Til Schweiger and Tina Ruland set a monument to him in the 1991 movie “Manta, Manta”.

The sometimes rather wild conversions and sometimes dull jokes did as little damage to its success as it did to its fame: In both generations between 1970 and 1988, the Manta was sold a good million times.

Comeback of what was believed to be dead

The Manta has since become rare on the road, and is still an eye-catcher, and its name alone arouses awe of admiration among many Opel fans.

Does the electric mod have a future?

At Opel they themselves know best that the Manta is cult: “The car shows the passion with which we build cars and how enthusiastic our customers are,” says Opel boss Michael Lohscheller. And his team hopes that this cult will pick up speed again with the electric mod. It is not for nothing that the makers from the classic workshop wish that this project might even find a few imitators or that there will even be an official conversion kit.

But in Rüsselsheim they probably also know that even the coolest retrofits are difficult to make money. “That has already failed with luxury brands like Jaguar with the subsequently electrified E-Type,” says market watcher Wilke.

“It is hard to imagine that a middle-class and therefore significantly cheaper brand like Opel would be more successful with it,” the classic car specialist expects. “After all, who spends a high five-digit amount on the electrification of a classic car that costs only a fraction as an original, even in the best condition?” After all, a really good Manta GT / E from 1970 is available from 25,000 euros, Wilke estimates current market prices.

The manta is coming again

So just an electric mayfly as a decoration on the birthday cake? “Not at all,” says Lohscheller, who is leaving as Opel boss in September. Because shortly before he announced this, he quickly promised a new Manta and presented the first sketches. “We are reinventing the manta,” is his message.

However, the new car will probably no longer be a classic coupé, Lohscheller has already indicated. According to these first sketches, the classic moves with the times and follows the trend towards the SUV.

In addition, like every Opel in Europe, the new Manta will be exclusively electric from 2028 onwards. But at least the name lives on.

Wanna Marchi, the series does not go beyond a simple survey – time.news
Posted onSeptember 25, 2022

how Deschamps protects the Blues in the media storm
Posted onSeptember 25, 2022
Menu