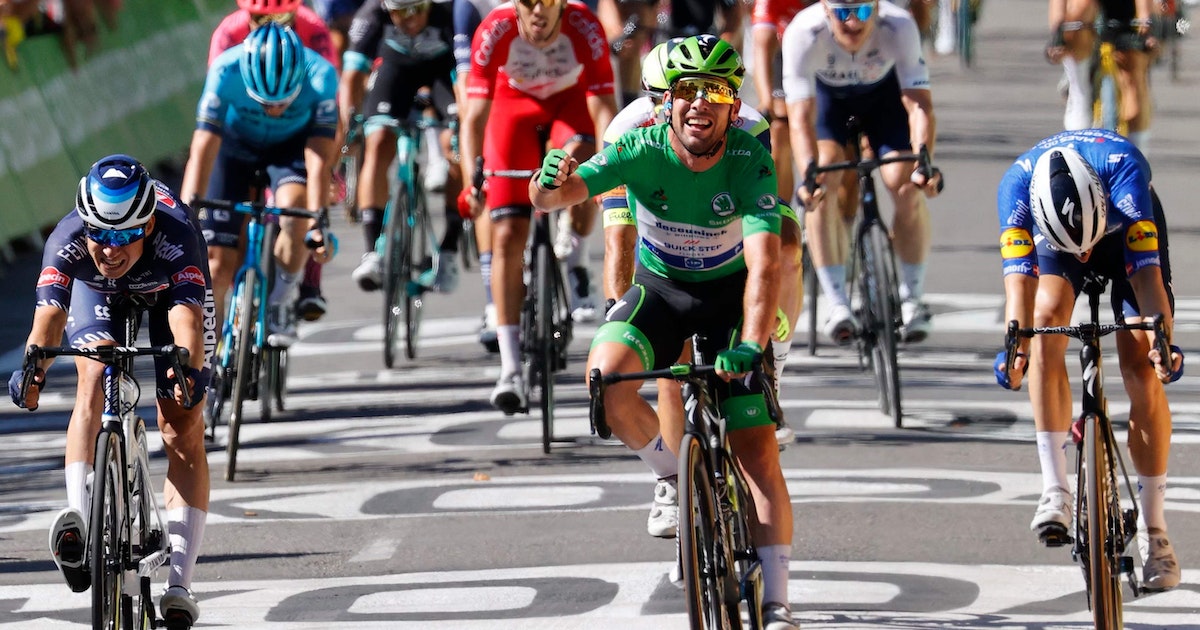 Carcassonne – Mark Cavendish has finally immortalized himself in the history books of the Tour de France and set the age-old record of cycling legend Eddy Merckx. The 36-year-old Briton won the 219.9-kilometer-long 13th stage from Nimes to Carcassonne on Friday, taking his 34th day win at the world’s largest cycle race. The Belgian Merckx, who had the same number of daily victories between 1969 and 1975, now has to share the prestigious record. At least until Cavendish finally overturns with a 35th win.

“There is no problem with Cavendish taking my record. I will not lose sleep because of it. If he manages, I congratulate him because it is not easy to win 34 sprints, ”the five-time overall winner from Belgium had already told Gazzetta dello Sport in advance. Merckx again discreetly referred to his 96 days in the yellow jersey, his titles and his versatility, with which he had won various stages.

Cavendish, who has had a long dry spell, will trump again in 2021 as in his younger years. The coup in Carcassonne was already his fourth win of the day, all mass sprints in the strongly decimated sprinter field have so far gone to the veteran. His Danish driver Michael Mörköv and the Belgian Jasper Philipsen ended up in second and third place on Friday. Even a wheel change around 35 kilometers from the finish could not slow the Briton.

Unlike the day before in Nimes, when Nils Politt ensured the first German victory, this time the sprinter teams did not allow any group to move too far away. A trio led by Frenchman Pierre Latour led the race for a long time, but the back of the peloton was always in control. Above all, Deceuninck-Quick-Step did everything again to organize a mass arrival for Cavendish, after he had previously mastered all the sprint finals.

The Germans remained inconspicuous this time after Politt and André Greipel had bravely attacked on Thursday. For veteran Roger Kluge, the race ended prematurely. The 35-year-old was involved in a mass fall 65 kilometers from the finish, in which several drivers fell down an embankment. At first it was unclear how badly Kluge had been injured.

In order to prevent further mass falls like the one at the beginning, the organizers stepped in this time. Unlike usual, the time of the main field was not taken three, but 4.5 kilometers from the finish this time, in the event that there were still falls afterwards. This was intended to defuse the rapid finish that led to falls and criticism on this 108th tour. The driver association CPA explicitly thanked the world association UCI and the organizer ASO. One is “happy” that one has obtained this test.

As expected, it was an easy day for defending champion and yellow card holder Tadej Pogacar. The 22-year-old Slovene defended his overall lead without any problems and is more than five minutes ahead of Rigoberto Uran (Colombia) and Jonas Vingegaard (Denmark).

After a hilly section on Saturday, which could be for outliers and classic drivers like Julian Alaphilippe, the fight for the yellow jersey will probably be serious again on Sunday at the latest. On the 191.3 kilometers to Andorra, on which the 2408-meter-high roof of the tour is climbed, Vingegaard and Co. have to attack courageously in order to have a chance at all against the distant Pogacar. The young Dane had already driven away from the Dominator on Mont Ventoux, but was caught up again on the descent.

Eli Dassa’s terms at Maccabi Tel Aviv have been agreed upon, the last obstacle: the length of the contract – ynet Yedioth Ahronoth
Posted onAugust 11, 2022August 11, 2022