Mattia Santori candidate with the Democratic Party in Bologna: controversy over the leader of the Sardines

From left: the Mayor candidate Lepore, Santori and the national secretary of the Democratic Party Letta

Mattia Santori is a candidate with the Pd for the administrative offices of Bologna: a choice that is arousing many discontent, inside and outside the Pd

The candidacy of Mattia Santori at the municipal offices of Bologna, as an independent on the Democratic Party’s lists, it is arousing discontent and discussions. The first to criticize the choice was Carlo Calenda, who has long since left the Dems, but who has not failed to argue with the leader of the Sardine, in an exchange of wishes on the “kick in the ass”, albeit metaphorical.

Even within the Democratic Party, not everyone appreciated the choice to nominate Santori, who had expressed himself very critically towards the party. After defining it as “toxic” as a whole, the young activist took it out in particular with the current of Reformist base, formed, in essence, by former Renzians who did not follow the migration of Matteo Renzi in Italy Viva.

On their behalf, Santori used really strong expressions: from “You are Renzi’s Trojan horses who have extensively polluted the Democratic Party” to “you are trafficking for a Renzism 2.0”, which would make them “an opponent to fight”. Words that the Milanese senator Alessandro Alfieri defines “unacceptable within a political community, ungenerous towards those who have spent years on the territory”.

“They are free and wrong criticisms. We have helped to ensure the reformist profile of the Democratic Party. Santori completely misses the analysis. I am sure that Letta will be able to explain the party’s internal rules to him “, adds Alfieri in an interview with National newspaper. The Lombard senator also spoke about Santori on Facebook, in a long post in which he first welcomes the various Sardines (not only Santori) who have decided to swim in the currents of the Democratic Party, but then adds “I don’t understand the need to fill in the list of good and bad in the Democratic Party. Or at least I understand that you are doing it to prevent internal criticism of the movement itself. But the criticisms will come in any case: I guess it is clear to you that the stage of applause alone is over”.

Also via social media, a sting also comes from the senator Andrea Marcucci, which before the advent of Enrico Letta the secretariat was the leader of the Dem group: “The brand of the Democratic Party is evidently no longer toxic for Mattia Santori. Now he just has to learn education, he cannot enter a community and attack a part of it, with quite old slogans. I hope someone teaches him. the netiquette “.

Merciless as always, the Net is unleashed in ironies on the spot in which the aspiring city councilor talks about his dream (“the first stage of Frisbee in Bologna”), comparing it with the much more ambitious “I have a dream” of Martin Luther King. 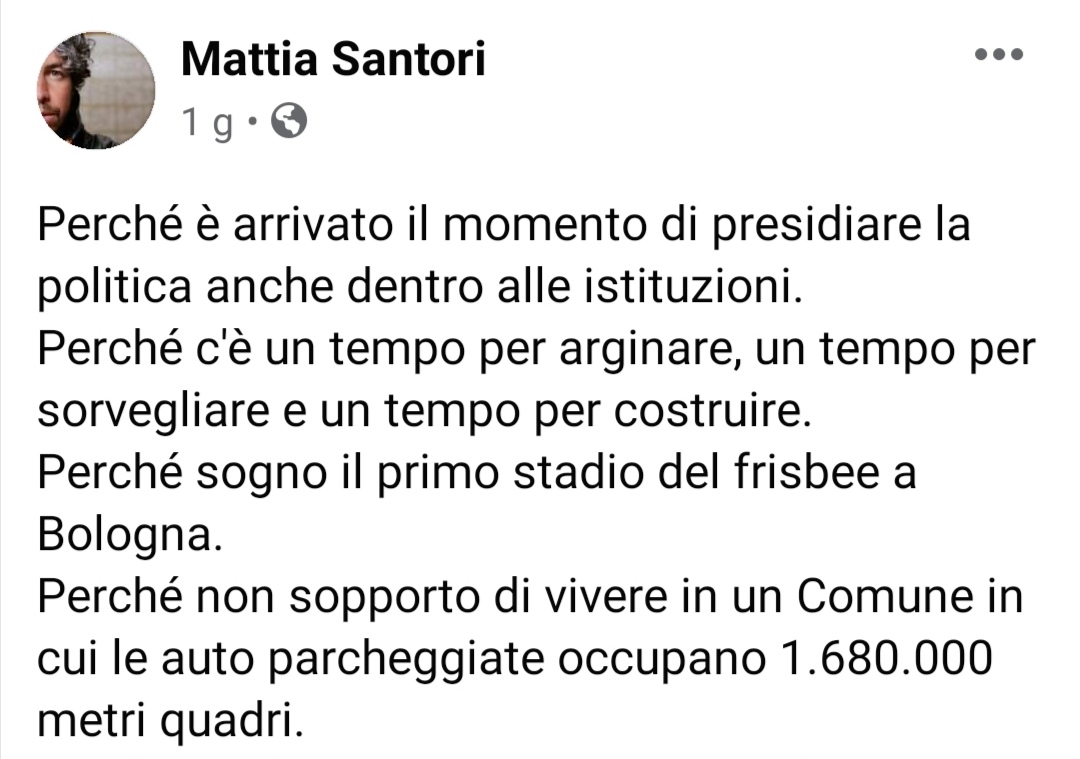 Why is Santori’s candidacy so divisive? After all, with an administrative session that on October 3-4 will involve 20 capital municipalities (6 in the region and 14 in the province), there are a few thousand aspiring municipal councilors who, on one side or the other, could be much more deserving of criticism. Just read the electoral programs or even just the posts on social media.

The journalist Massimo Rebotti he rightly observes: “With all the unlikely (or worse) aspiring councilors there are, the degree of irritation Santori arouses strikes me. A know-it-all? Ok, it was the first. And many have been far more successful than him. An incompetent? Um, do we want to talk about some recent ministers? In short, especially in the part that in some way could be similar to Santori, the left, there is the most widespread annoyance, the mockery, the insults. This is the part in which everyone believes themselves to be the coach of the national team and therefore the ‘but who is this, but what does he want?’ it snaps, as it were, automatic. Nonetheless, this irritation – with all the somewhat unpresentable candidates that even the left has had and has (and who do not receive the same treatment) – seems significant to me, something to say: ‘Oh, but this Santori, after all , what has he done to you? ‘ Unless, and it is a hypothesis, the irritation itself, regardless of who arouses it, has become one of the most authentic characteristics of the times “.

Mattia Santori: “That’s why I am applying for the Democratic Party”

Obviously, the person concerned also had his say. Mattia Santori he is well aware of the attacks he is receiving from outside, but also from within, as not all Sardines welcome the entry of traditional party mechanisms. Not only the Democratic Party, because multidirectional movements are also underway in other cities. This is, explains the young leader, “a new phase. Because there is a time to stem and a time to build. A time to entrench and a time to attack. They will tell you that we are slaves of the Democratic Party, that we throw away the mask, that we sell ourselves for a place in the bargain. Whoever says this has political roles obtained certainly not for ethics, passion or self-denial to public affairs; he doesn’t mind changing his shirt on the basis of the polls; use your profile or newspaper as a media pillory or fake news furnace. The truth is that they are afraid because someone to the dynamics of the First Republic prefers to roll up their sleeves and offer themselves to politics, because a young activist chooses to certify an alliance starting from the bottom rather than securing a comfortable seat in Parliament “.

A personal commitment, which, Santori adds in another passage, is the natural continuation of the commitment undertaken with the support of Stefano Bonaccini in the 2019 regional: “It is not about joining the PD or other parties, it means giving your contribution to the coalition led by Matteo Lepore, a coalition that on October 4 wants to win by a large margin for give a wake up call to the national center and from 5 October he wants to demonstrate what it means to administer what aims to be the most progressive city in Italy “.

Afghanistan, the testimony of 2 women: “They don’t let us into the offices”

Russians will be able to take a preferential...

Maximum daily indicators for covid have been renewed...

Why Russians don’t want to get vaccinated against...

Dpcm, that’s why Conte did not violate the...

Berlin police no longer let anyone with a...

No more work according to the rules

Bank of the Rivière des Prairies | A...

The prosecutor’s office demanded to remove the accumulation...