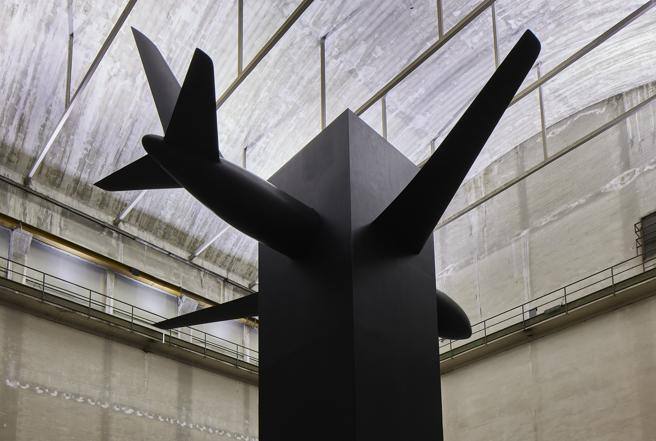 The Breath Ghosts Blind exhibition opens on Thursday 15 at Pirelli HangarBicocca, a change of pace for the author. No irony, if anything, the elaboration of a mourning

A serious and silent exhibition. An exhibition with only three works, we could say a drama in three acts, sometimes dark and distressing, but also moving, which speaks to us of pain, loss, the elaboration of mourning and the inner search necessary to find a sense of rebirth. And of hope. Who expects a provocative and ironic Maurizio Cattelan, to understand Cattelan de The Ninth Hour, with the Pope struck by the meteorite, or that of America, with the Trumpian toilet of gold, he will be disappointed. After ten years of absence from Milan, his return to the solemn spaces of the Pirelli HangarBicocca, transformed today into an immense Gothic cathedral with Breath Ghosts Blind (literally Breath, Ghosts, Blind), leads us to live the ritual of elaborating a collective mourning. A secular rite in the name of art, but no less exciting and poignant.

As if it were a theatrical pice, the narrative punctuated in the powerful dialogue with architecture, which also reveals the curatorial quality of Roberta Tenconi and Vicente Todol, who not by chance chose the collaboration of Pasquale Mari, a great expert on lights in cinema and theater, to give strength and mystery to the three works.


The first impact with Breath, an unprecedented sculpture placed in the darkness and silence of the immense space and which therefore takes on a dimension suspended in time. The sculpture, illuminated by a beam of light that isolates it and draws its boundaries, appears at the same time spooky and poetic: life-size, in white Carrara marble, we recognize the figure of Cattelan himself with a dog, a setter next to him. Both are lying, apparently serene, but something is not right, the posture recalls the casts of Pompeii. And so, the question arises. Why am I there? They sleep? Or are they dead? The man in the fetal position, a wool cap on his head, we only see the folds of a shirt, his bare feet. It is well known that Maurizio Cattelan’s art shuns codified interpretations. There are no answers, ever. Possibly questions.

Of course, the choice of marble brings us to classicism, and Cattelan’s work, in its own way, steeped in art history. The figure of the dog rich in symbolism: already represented in mythology as the most faithful friend of man. But it can also have a negative value: not surprisingly, in some representations of theLast Supper, is depicted at the feet of Judas. Cattelan is too intelligent to miss out on the various reading possibilities.


And again, the title: Breath, as if there was a common breath, in unison, the same we observe when along the sidewalks we meet a homeless man with his dog, a subject already evoked, as in the rag dummies in Andreas and Mattia (1996). For the artist it is customary to stage himself, but an artifice: his face thus becomes a metaphor, a simulacrum of something else. And then, how can we not think of George Floyd’s desperate scream I can’t breathe? As always, we see what we know, and feel what we have already experienced. And frankly what we like to see is the intimate gesture and the poetic naturalness of the relationship between man and dog.


On the other hand, as the famous psychoanalyst James Hillman recalled: We are obsessed with pain, and for this reason we are obsessed with Anesthesia and Distraction: Maurizio Cattelan knows this well and makes this thought his own. Not only that: anyone who knows the complexity of his research knows how the artist has placed the power of art at the center of his work in exorcising death: he did it in 2004 with Now (JF Kennedy’s body exhibited in a coffin) or in 2007 with All (a marble sculpture with nine corpses covered with sheets) or in 2008 with Daddy, Daddy, (a little Pinocchio lying upside down in a swimming pool). Over the years Cattelan has built a museum of fragmented memories, like a chimerical and prodigious anesthetic against suffering.

He reveals it himself in a distant conversation with Giancarlo Politi: When I worked in the morgue I had to deal with corpses, real corpses, and they seemed so deaf, distant. Perhaps all the fault of that work, but when I think of a sculpture I always imagine it like this: distant, in some ways already dead. I am always surprised when people laugh at some of my works: perhaps in the face of death, laughter is a spontaneous reaction. Of course, in this exhibition, you don’t really want to laugh, quite the contrary. And a new step is taken. become more mature, Todol liquid in a joke.

Maybe you can have a short ride of satisfaction in recognizing his famous stuffed pigeons placed at the entrance above the large Pirelli HangarBicocca sign. But we will not find here the same provocative and ironic value of the pigeons presented in two editions of the Biennale: in 1997 in the Italian Pavilion, in the edition curated by Germano Celant, and in 2011 in the central pavilion of the Bice Curiger Biennale. And if before they were called ironically Tourists and then Others, now the birds have multiplied and become authentic Ghosts, ghosts that observe us from above, from the walls, from every angle, and make us anxious.

Like in the Hitchcock movie the birds they seem like a crowd of unstoppable colonizers, apparently quiet for now, but ready to attack. We just don’t know when. They are thousands, silent and still and occupy every space. So this mass of dead and stuffed birds forces us to reflect on a reversal of vision: perhaps we are the intruders. It is not we who look, but we who are observed by thousands of glassy eyes. But don’t the cameras in the cities do the same?

Thus, walking in the void of the aisles with a sense of inevitable restlessness, you reach the Cube, where the turbines were tested, the identity space of the historic industrial area. From a distance, only an abstract form is perceived, a large black monolith. Then, approaching slowly, we enter a lightning journey through time: let’s go back to 11 September. The resin monolith, painted black, almost 18 meters high, crossed by the profile of an airplane, also black. We are facing the third work of the exhibition, Blind, in which the tragedy is crystallized in a formal essentiality, almost in contrast to the siege of images that accompanied the event.

Cattelan was in New York that day, he was embarking for Chicago and after the airports closed he walked all the way back home: he had time to see, understand, hear. Now, twenty years after those days, the time has come for him to reflect with the right distance and leave a testimony. And he does it without rhetoric, following Elias Canetti: Finding the path through the labyrinth of one’s time, without succumbing to it, but also without jumping out of it.

In the aisles: the stuffed birds return

The installation is also part of Maurizio Cattelan’s exhibition path produced by Pirelli HangarBicocca Ghosts, located in the naves of the former industrial building, which proposes a new version of an artist’s intervention presented as Tourists to 47 and how Others at the 54th Venice Biennale: a large number of stuffed pigeons watching us as if to keep us under control, causing concern.

The personal exhibition of Maurizio Cattelan, entitled: Breath Ghosts Blind, curated by Roberta Tenconi and Vicente Todol. Maurizio Cattelan, born in Padua in 1960, is one of the most influential figures on the international art scene for his ability to interpret the tensions and changes of our time. With Breath Ghosts Blind Cattelan wanted to represent the cycle of life in its various stages through three different installations. The lighting of the exhibition Breath Ghosts Blind was conceived by the light designer and director of photography Pasquale Mari